I guess inflation isn’t cooling off. 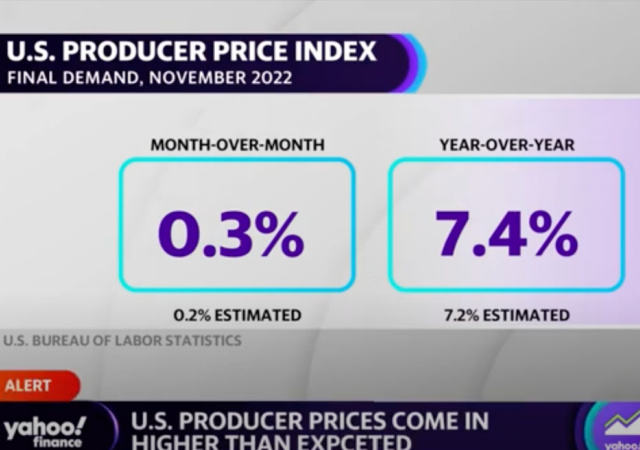 The producer price index (PPI) increased 0.3% in November from October and 7.4% from a year ago. From CNBC:

The producer price index, a measure of what companies get for their products in the pipeline, increased 0.3% for the month and 7.4% from a year ago, which was the slowest 12-month pace since May 2021. Economists surveyed by Dow Jones had been looking for a 0.2% gain.

I thought inflation was going away:

Services inflation accelerated for the month, rising 0.4% after being up just 0.1% the previous month. One-third of that gain came from the financial services industry, where prices surged 11.3%. That was offset somewhat by a sharp decline in passenger transportation costs, which fell 5.6%.

On the goods side, the index rose just 0.1%, a steep decline from its 0.6% October gain. That modest gain came despite a 38.1% acceleration in prices for fresh and dry vegetables. Prices moved higher across multiple food categories even as the gasoline index tumbled 6%.

The consumer price index comes out next Tuesday. Then on Wednesday, the Federal Reserve will end its two-day meeting.

Policymakers want this to happen “to quell stubborn inflation.” But are these mistakes?

Lindsey Piegza, Stifel Financial’s chief economist: “This is going to be a complicated process, not a flip-the-switch scenario for the Fed. We’re consistently under-evaluating, or under-appreciating, the stickiness of inflation.”

Jeffrey Roach, LPL Financial’s chief economist: “The monthly increase in producer prices illustrates the need for continued tightening, albeit at a slower pace. The inflation pipeline is clearing and consumer prices will slowly move closer to the Fed’s long run target.”

It’s unfortunate how many people don’t understand what the number means.

I’m not an economist but my theory is government spending, stimulus money and other freebies given out by our government is causing prices to rise along with recent increases in wages and fuel costs can affect costs. Raising interest rates is not as an effective tool as reducing government spending.

You just highlighted a feature, not a bug, in the stolen election of 2020.

Let’s not forget the impact on govt debt. Much of our federal debt is not in 30 year bonds. It is much shorter duration which means as these instruments reach maturity they must be either paid off or reissued at far higher rates of interest. The increased costs of borrowing at higher interest rates means those increased payments will crowd out other spending. Eventually the party comes to an end.

We’ve had a long run since the last measure of outside influence over too much federal spending/borrowing and printing was neutered by Nixon taking us off the gold standard. When foreign Nations could swap dollar denominated currency reserves for gold that acted as a short term brake on Fed govt profligate inclination. Which is exactly why it was removed in 1973. The hangover from the five decade party will be painful, the costs high and the damage severe.

These are not (all) necessarily dumb people in control over all our lives. Some MAYBE even sincere & not cluelessly malicious.

But all are still WAY in over their heads.

But even more importantly – Exile ALL Democrats to Guantanamo.