Lava is spilling toward a key Hawaiian highway. 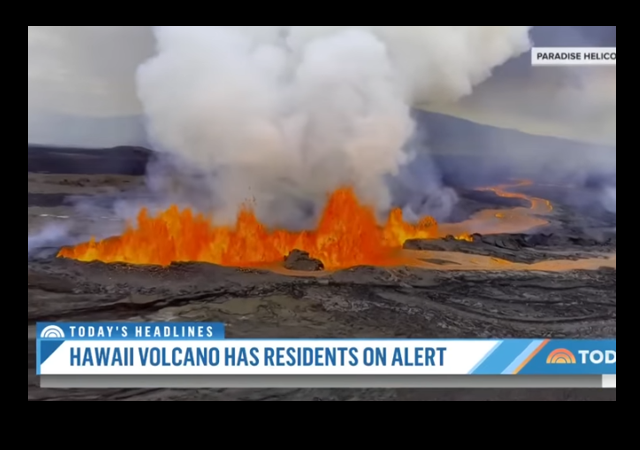 Two volcanoes are erupting simultaneously on the Big Island of Hawaii, which hasn’t happened since 1984.

Mauna Loa and neighboring volcano Kilauea were both erupting for the third straight day. Kilauea is a continually erupting volcano, while Mauna Loa erupted for the first time in 38 years on Sunday. Mauna Loa is the largest active volcano in the world.

“This is a rare time where we have two eruptions happening simultaneously,” said Jessica Ferracane, spokeswoman for Hawaii Volcanoes National Park, according to CBS News. “To the people of Hawaii, this is a very sacred event that we are watching.”

While no evacuations have been declared as of this report, the lava flows toward the main highway on the Big Island.

The world’s largest active volcano is shooting fountains of lava more than 100 feet high and sending a river of molten rock down toward the main highway of Hawaii’s Big Island.

The leading edge of the lava flow gushing out of Mauna Loa is about 3.6 miles away from Saddle Road, also known as Daniel K. Inouye Highway, as of 9 a.m. local time, according to a US Geological Survey news release.

USGS officials said Wednesday it could take at least two days for lava flows to reach the road, which connects the east and west sides of the island. The advancing flows “are approaching a relatively flat area and will begin to slow down, spread out, and inflate,” the statement says.

The eruption of Hawaii’s Mauna Loa volcano has temporarily killed power to the world´s premier station that measures carbon dioxide in the atmosphere.

There are hundreds of other carbon dioxide monitoring sites across the globe. The federal government is looking for a temporary alternate site on the Hawaiian island and is contemplating flying a generator to the Mauna Loa observatory to get its power back so it can take measurements again, said officials at the National Oceanic and Atmospheric Administration´s Global Monitoring Lab in Colorado that operates the station.

I will simply note that one report on a 2002 eruption of Kilauea showed a CO2 emission rate of 8500 metric tons per day. Will Hawaii have to put money in for carbon offsets because of its active volcanoes?

Meanwhile, thousands are enjoying the show.

Anne Andersen left her overnight shift as a nurse to see the spectacle on Wednesday, afraid that the road would soon be closed.

“It’s Mother Nature showing us her face,” she said, as the volcano belched gas on the horizon. “It’s pretty exciting.”

Gordon Brown, a visitor from Loomis, California, could see the bright orange lava from the bedroom of his rental house, so he headed out for a close-up view with his wife.

“We just wanted … to come see this as close as we could get. And it is so bright, it just blows my mind,” Mr Brown said.

As a geological note, Hawaiian volcanoes are examples of shield volcanoes, which are formed due to oceanic plates moving across a “hot spot” in the Earth’s crust.

Hawaiian volcanoes reach these huge volumes in relatively short periods of time. Mauna Loa is thought to have begun forming on the sea floor some 500,000 years ago, although this is poorly constrained. For Mauna Loa, these numbers yield an average eruption rate of 0.085 cubic kilometers/year or 2.7 cubic meters/second. Interestingly, this is almost exactly the same eruption rate that is seen during low effusion-rate eruptions, and from observation of such eruptions this has been proposed to be the supply rate from the mantle.

Bottom line: what sort of “relief” giveaways does Washington have in mind for mainlanders to pay for?

I don’t know, but it’s about time for a volcano to erupt somewhere else. That one in Mexico erupts everyday and spews Mexicans across the border.

I wonder if Hawaii has enough carbon credits to deal with this.

Might have to get some crypto credits from Sam Bankman-Fried.

They are Leftists. Laws, including environmental laws, do not apply to them.

The volcanoes on a normal day spew as much CO2 as Honolulu County. A largish city.

It is a welcome change of pace that the Pelosi gang has not brought articles of impeachment against Trump for causing the eruptions.

The volcano Gods demand a sacrifice

Because, we know, it’s all Trumps fault
Every.Thing.In.This .World…

Especially an increase in Carbon which we all need to live, but that’s “our truth”

Trump got us out of the Paris Climate Treaty and that’s why the volcanoes erupted, we all know this to be “our truth”…

And he met with KanYe, that alone might have cause this eruption

Thing is they’re going to have to throw Republicans in. There aren’t any Democrat virgins.

Really amazing what globul warming can do, isn’t it?

“The eruption of Hawaii’s Mauna Loa volcano has temporarily killed power to the world´s premier station that measures carbon dioxide in the atmosphere.”
Cue Church Lady: “Isn’t that conveeeeenient!“

As one who follows these thing religiously, I am of course ticked off that USGS and NPS have closed off the use of drones. In Iceland, the natives would have hours and hours of great stuff everyday with 4K drones. But In Hawaii, we either get get stationary footage from a few miles away or the USGS takes their $$$$/hr copter up to get a few minutes of shakey stuff from someone hanging out the door. Oh, and they have their webcam set up over on Mauna Kea, maybe 20 miles away to let us see the orange glow at night. For all of their budget, HVO does a piss poor public relations schtick.

They should just hire GutnTog to come and do all of their stuff, which he does on his own. His coverage of both Icelandic eruptions and La Palma were spectacular, and all on his own dime.

Here is another guy who does it well.

Shoot, just tax us a little more.
If the gloBullSchiff warmers can stop the climate from warming up a couple volcanoes shouldn’t be any problem to handle at all.

It’s Climate Change … it can do anything

I have no idea who Jessica Ferracane is or why she thinks this sacred. It is not. However much we love to view our rather pacific volcanoes of hawaii, we are aware that one lava flow going in the “wrong” direction is a disaster for hundreds, if not thousands of people.
My favorite story, and a true one, is in the flow of 1880-1881 of Mauna Loa, Liliokalani and Princess Ke’eliokalani (we know her as Princess Ruth, she was well liked and a very adventurous character, huge woman) sailed separately to Hawaii Island because it was clear the flowing lava would engulf the city and port of Hilo. (wonderful city, btw, but wet)
After getting the info on what was happening, Ruth’s resolve to end this mess was triggered. She went to the threatening flow with a bottle of brandy and a red kerchief (red is Pele’s color and the kerchief would have the scent of her ancestry) , got down on her knees and asked Madam Pele to stop. Now mind you, Ruth was a Christian. She placed both items in front of the flow and said it must end for the good of the people. The lava flow immediately stopped. She was surrounded by a dozen retainers, and of course over a hundred people including Christian missionaries were witnesses. All agree, the flow and eruption simply stopped.
Church services were held throughout the island.

While we wander around on the thin (< 100 miles thick) solid shell floating on a hot liquid ball of molten rock, we take steps to influence climate. A fool's errand, it is. We are passengers on this trip.

Mauna Loa is on Maui; Kilauea is on the Big Island.

The US Geological survey says they’re both on the Big Island (Hawai’i itself).