A shocking and disturbing exclusive from the UK Daily Mail. 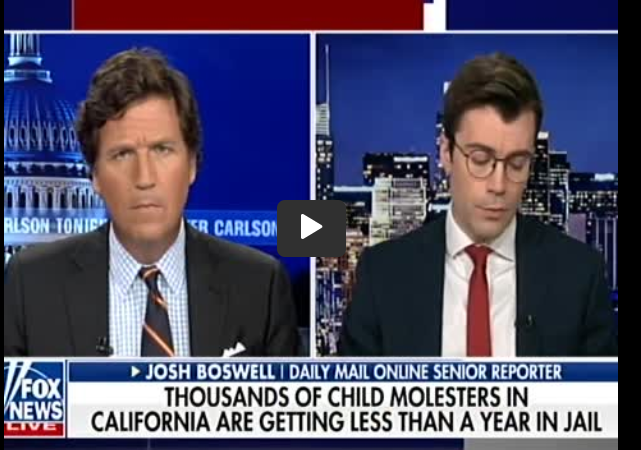 I sometimes refer to California as the 10th circle of hell in reference to Dante’s Inferno. Now a British publication confirms my assessment.

The UK Daily Mail published a shocking exclusive detailing how thousands of California’s convicted pedophiles were released after serving less than a year in prison.

Analysis of a California database of sex offenders shows thousands of child molesters are being let out after just a few months, despite sentencing guidelines.

Current and former sex crime prosecutors said the figures are ‘terrifying’ and ‘shameful’.

More than 7,000 sex offenders were convicted of ‘lewd or lascivious acts with a child under 14 years of age’ but were let out of prison the same year they were incarcerated, data from the California Megan’s Law database says.

Others who committed some of the worst child sex crimes on the statute books served similarly short sentences, including 365 pedophiles convicted of continuous sexual abuse of a child who spent less than 12 months in prison, 39 cases of sodomy with a child under 16, and three cases of kidnapping a child under 14 ‘with intent to commit lewd or lascivious acts’, according to the data.

Former Los Angeles sex crimes prosecutor Samuel Dordulian told DailyMail.com he was ‘shocked’ by the statistics and described them as ‘frightening for society’.

Daily Mail senior reporter Josh Boswell was interviewed by FNC host Tucker Carlson. Boswell indicated that he had to bypass limitations on California’s Megan’s Law website to gather statistics on registered sex offenders in the state.

Apparently, the California Justice Department refused to provide him with the data. During the interview, Boswell cited some of his most troubling finds.

You’ve got similar examples, Carlos Nahue, continuous sexual abuse of a child he was convicted of in 2015.

He spent two days in jail, and he now lives one block from a daycare, according to the database, which is in California, run by the California Department of Justice.

We asked them to give us the data, but they refused, and so I had to write the script to put this all together so that I could show the public this information.

CALRSON: So just to be clear, these are not technical sex crimes. This is not a 17-year-old and an 18-year-old getting frisky at the prom and getting arrested.

California’s officials were less than responsive to Boswell’s follow-up inquiry.

A number of California officials who were asked about the report’s findings blamed policies endorsed by Democratic Gov. Gavin Newsom which have allowed shortened sentences and early release for convicted criminals.

Boswell said he contacted the California District Attorney as well as Newsom’s office – both of whom deflected blame or ignored his inquiry on the issue.

I want to thank the British press for doing the job the American media won’t do…especially the moralizing news organizations within California.

Remember when “You’re ruled by pedophiles!” was a just a crazy conspiracy theory?

What’s crazy is how our country simultaneously admits to absolutely horrible truths but can’t seem to act as though those truths are true.

Well, you can bet that this pResident won’t be making a big deal about it.

Californica is a real mess. Either don’t arrest the perps, or let them out if you do. I guess the Californicans are alright with this.

I saw a video of an Apple store where 3-4 black men, masked for your protection, just started collecting iPhones, iPads and computers and stuffed them into their bags. No rushing, no worries, no police or store employees stopping them.

Employees were busy keeping other customers from interfering

Dotard-marionette, Biden, is manifestly the Pedophile-in-Chief, so, the tottering sniffer/creep obviously won’t be raising a ruckus.

Groomers on the loose.

These pedos are beyond grooming—they are zooming—to their next targets.

Is it California, or just Democrats in general?

The details may differ, but the core is always the same… sexualization of children. Whether it is grooming in schools and libraries, steps in the direction of beginning to redefine paedophiles as MAPs or, as in this story, leniency towards those who get caught it is Democrats who are always behind it.

Sexualization of children, and, coddling of criminals. The perennial, reflexive ethos, from the vile Dumb-o-crats.

And they’re deliberately mixing it in with the LGBTQWERTY agenda, so if you speak up about sexualizing children the lefties start shrieking “Aggh! You’re being a homophobe!”

Right…but when they draw an equivalence between paedophilia and homosexuality it raises a valid question as to who is the real homophobe.

Californians display true enlightenment: they are both pro-child and pro-pedophilia. The CA legislature and Disney are together working on legal revisions that will strengthen pedophiles’ right to adopt minor children. Now, THAT’S progressive!!

The same ethos that prevents the vile Dumb-o-crats from unambiguously and unequivocally condemning totalitarian despots/regimes of the communist and Islamic varieties prevents them from condemning criminal sociopaths and their predations. Criminals are viewed by Dumb-o-crats as alleged “victims” who cannot/should not be held responsible for their actions.

This is a patently evil attitude, from the despicable Dumbs.

This should be a core issue for r. Run on ‘leave the kids alone’. No paedophilia, no telling grammar school students about your sex life or orientation, no kids taken to or performing at a drag show, no forced Rona jab for school attendance, no CRT, no indoctrination, support Parents rights.

The overwhelming majority of Americans would support that across the Nation. Heck San Francisco got a few School Board members replaced so it can be done even in the bluest of blue enclaves.

I wish I had your optimism.

If we consider that 65% of voters would support the action agenda items I mentioned as the ‘overwhelming majority’ that would leave a very depressing 35% of the voters in opposition to protecting the kids.

From that perspective it’s not optimistic or pessimistic but rather a realistic analysis. There’s no doubt that about 1/3 of voters, the 35%, are blinded by their ideology to the point of allowing harm to children. It’s grotesque but that seems to be a about where we are as a Nation.

Leaving aside that the Republican Party would run screaming from such a platform specifically because it would win, there are two other impediments. First, how much time do we have left where elections mean anything? Second, who counts the votes?

Youngkin won in VA on this agenda. DeSantis won in FL on this agenda. A very large number of school board races were won on this issue. The recent data seems to show that the r at State and local level is using this to win. Heck, voters in San Francisco of all places tossed out three weirdos from their school board. It’s not a 100% partisan issue, as I imagine most Parents and community members object to sexualized classrooms and blatant indoctrination.

Do the work and win where we can. Ignore the establishment in DC and the corporate media, ruck up, lean forward and keep walking. If some States and localities choose to sacrifice their children then the Parents can move somewhere sane. We won’t win every fight but we won’t win any if we are unwilling because think it’s too late or the votes won’t count.

This is why I favor the death penalty for murderers.

Because under liberals, ‘life without parole’ means no such thing.

With social progress, they can now marry that underage girl or boy, and, with the former, they can abort, cannibalize, sequester the “burden” of evidence in darkness in sanctuary states.

A wretched hive of scum and villainy. Without the cool band.

And, it’s truly a demoralizing spectacle that a British newspaper will report that which the American, Dumb-o-crat media puppets/lapdogs/lackeys/propagandists refuse to report/ignore.

For years I have scanned British papers, not for British items for which they are absolutely PC, but for what they bring out about America. Their disdain for Americans makes it alright for them to investigate what happens here, when they cannot investigate things in their own country. You have to get used to their viewpoint, but Brit papers should be checked out. The Daily Mail is a good place to start.

I agree. With an exception for stories where they share a liberal narrative. Gun stories in the British papers, for instance, are even more irrationally unhinged than they are here.

Who is rewriting penal law, changing crimes to non-crimes it seems like with “a pen and a phone?”

Is this covered by the commerce clause: pedophiles get released, while rail workers get conscripted? Asking for workers in essential industries, including essential crime, of course.