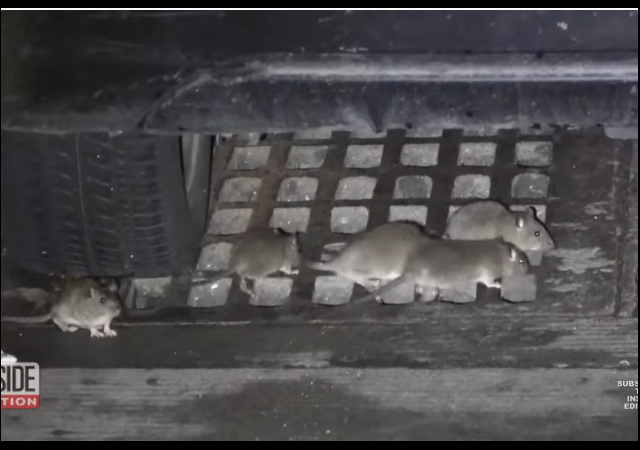 New York City has an intriguing job opening that might be perfect for a motivated individual.

Millions of New York rats have been put on notice: the most populous city in the United States is hiring a director of rodent mitigation, a new position that calls for a “swashbuckling attitude” and a “general aura of badassery.”

The new job, posted earlier this week, is part of the city’s attempt to curb an explosion in its rodent population since the pandemic began. Rat sightings on the streets, in subways and even homes have jumped 71% over in the past two years, according to the city’s sanitation department.

“There’s NOTHING I hate more than rats,” Mayor Eric Adams said in a tweet on Thursday in announcing the job posting. “If you have the drive, determination, and killer instinct needed to fight New York City’s relentless rat population – then your dream job awaits.”

In addition to dealing with the rodents, the candidate will have to also deal with the humanoid rats that populate New York City bureaucracy.

The successful candidate will be the public face of the city’s fight against rats. But this isn’t just an office job – they’ll also be expected to “lead from the front, using hands-on techniques to exterminate rodents with authority and efficiency.”

The salary for the city’s lead rat authority ranges from $120,000 to $170,000, according to the listing. Interested candidates can send their resumes, cover letters, and three references to the city’s online application portal.

The Rat Czar is going to be very busy.

In New York City, the rat population is about 25% the size of human population – that’s about 2 million rats! Brown rats live for about 1 year. They begin mating at two or three months old, and produce litters of about a dozen “pups” every two months. Recently, the rat infestation has grown even faster than normal due to budget reductions and wasteful food disposal.

Ernie Schicchi, owner of Alternative Pest Control in Brooklyn, thinks the rats will win. He blames the pandemic.

“When COVID hit and restaurants closed, garbage stopped being set out and rats lost food sources,” he said. “So they fed off of garbage in residential neighborhoods. Now that restaurants are open again, they [eat] from both.”

…“New York City will not win,” Schicchi said of the war being waged against the rodents. “Too much has to happen everywhere at once. The rats are going to win.”

Wishing New York City tons of luck in its quest. However, it is only fair to point out that Los Angeles and San Fransisco also take the honors for “rattiest city in the United States.”

Orkin, Inc., the Atlanta-based pest control company, has produced its “Rattiest Cities” list for eight straight years. Rankings are based on the number of new rodent treatments performed at both residential and commercial properties within the last year, specifically between Sept. 1, 2021, to Aug. 31, 2022.

Taking the top spot in 2021 — and keeping its streak alive — is Chicago, a city deemed by Orkin to be the “rattiest” in the country for an eighth straight year.

New York, Los Angeles, Washington, D.C. and San Francisco rounded out the top five — with New York overtaking L.A. for the first time in the history of Orkin’s rankings.

It would be great if they could find a rat czar with the surname “Katz”.

Check all rats to see if they’re legal. If not, give them a big welcome.

Trump handled rats in one of his buildings by simply releasing a bunch of feral cats into it. Problem solved.

But how do you target the rats without endangering NY politicians?
Itchy Brother (a cat) worked for Biggie Rat, and never ate him, so there is precedent here. NY universities are writing the grant proposals as we speak.

Rebrand eating ze rats as a quality protein source to save the planet!!

Mandate rat be served for lunch at all NYC public schools. Sue Yeshivas for not complying with the dietary guidelines.

“And then you bit onto them, and learned once again that Cut-me-own-Throat Dibbler could find a use for bits of an animal that the animal didn’t know it had got. Dibbler had worked out that with enough fried onions and mustard people would eat anything.”
–TERRY PRATCHETT

Back in the 1970s a guy in NYC was catching pigeons and selling them cleaned and dressed as “squab”. Animal lovers freaked out and tried to get the gov to stop him, but nobody could find any law he was breaking! City Council came up with one almost instantly.

Rebranding sounds like a great idea, but what to call it? Nobody ate Chinese Gooseberry until they were renamed “Kiwi Fruit”.

I knew a guy who was in the Peace Corp in West Africa. I asked him if he ever ate rat there. His reply: “Rat wasn’t the worst thing I ate in Africa.”