Avenatti has to serve the 14 years after he finishes the five-year sentence he’s currently serving for New York charges. 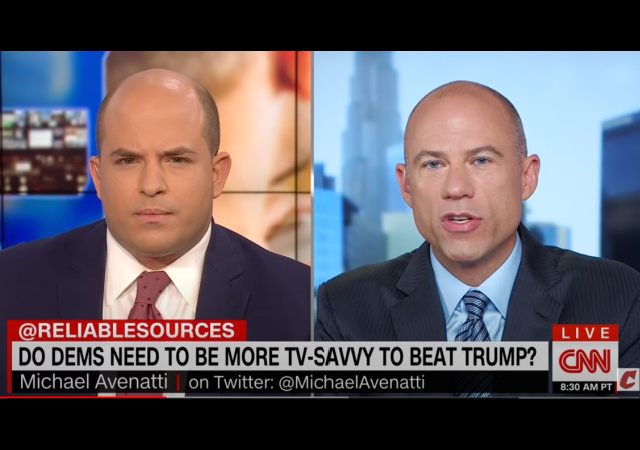 Avenatti is already in prison for five years “for his extortion and fraud convictions at two trials in New York.”

Selna ordered Avenatti to serve 14 years after he finished that prison sentence.

Selna also told Avenatti “to pay nearly $11 million in restitution for embezzling millions of dollars from four of his clients and obstruction.”

From The Los Angeles Times:

One of the law clients he robbed, Geoffrey Ernest Johnson, was a mentally ill paraplegic on disability.

Johnson won a $4-million settlement of a suit against Los Angeles County. The money was wired in January 2015 to Avenatti, who kept the bulk of it and lied to Johnson about it.

“I trusted him implicitly, I believed the things he told me, but it was all part of his plan to defraud me of my settlement,” Johnson wrote. “To this day, I have a hard time trusting people because of what Michael did, and I live in constant fear of being taken advantage of again, particularly given my physical disability.”

The left gushed over Avenatti when he represented Stormy Daniels in her lawsuits against former President Donald Trump. Former CNN host Brian Stelter even floated the idea of Avenatti running for president as a Democrat.

We all laughed then.

I’d laugh now if Avenatti didn’t leave so much destruction and ruined lives in his path.

He wouldn’t have been any worse than Biden.

With good behavior he should be on the 2036 ballot easy.

There’s nothing stopping him from running now, if he likes. He’s got as much chance of being elected now as he will then.

The collective IQ of democrats still needs to drop another 20 points.

Think Fetterman
And Biden for that matter…

One Dumb-o-crat hustler down; only a few million more to go.

Still waiting for Bankman-Fried to be criminally charged. Amazing how the media and Dumb-o-crats (but, I repeat myself) have collectively circled the wagons to protect and lionize this transparent con man, even after ample circumstantial evidence of his malfeasance has been revealed. It will be interesting to see how long Bankman-Fried’s “I didn’t know anything” act will hold up. I assume there are at least a few federal prosecutors who are ambitious enough to want to put a feather in their cap by charging and convicting this guy.

The only way Bankman-Fried is convicted is if Alyssa Milano and the The Bang-Me-Too (#Me-Too) crowd can prove he acted like Harvey Weinstein. Otherwise, free pass.

Avenatti? He’s gonna get a LOT of banging in prison over the next 19 years.

Federal Prison is not a cake walk, but it is not rape central. Avenatti will probably be popular as a jail house lawyer.

Avenatti is currently at a low level facility at Terminal Island in California. https://en.wikipedia.org/wiki/Federal_Correctional_Institution,_Terminal_Island

Bankman-Fried may end up wishing he was relatively safe in Federal prison. I would not be surprised if he took someone who is not too happy about it and in a position to do something about it. Alternatively, there are probably some Democrat recipients of donations that wish he would just disappear. Nothing like a little boating accident in the Bahamas.

Avenatti made the fatal mistake of.not stealing enough. The Biden family is living proof of this concept.

Not that he wasn’t stealing ‘enough’, he wasn’t kicking any of it to democrats upstairs. It’s that simple.

Well there’s timber .. and “Timber!” Sad,,, he would have made a better president than Joe Biden… less crime and more brains… sort of.

Avenetti is smarter than Obama, as corrupt as Biden, and socipathic as both of them. Obama and Biden both belong in prison with Avenetti. So does Hillary Clinton.

He will be pardoned

Isn’t this the guy who the left and Main Stream Media held up as an Icon against the Evil Trump?

Should give folks some serious doubts about their ability to choose their Icons.

So few news stories these days have a happy ending!

He is a good candidate for the Democratic Party.

They’re not only not the president, they’re not even clients.

If you don’t want to see Avenatti dont watch Hey Pepsi Where’s My Jet? On Netflix

But, but, but he can still run for Prezzy when he gets out — it’s only disqualifying if The Screaming D’s impeach you for it, right?

Asking for a supercut of the usual suspects. They gotta have hope.