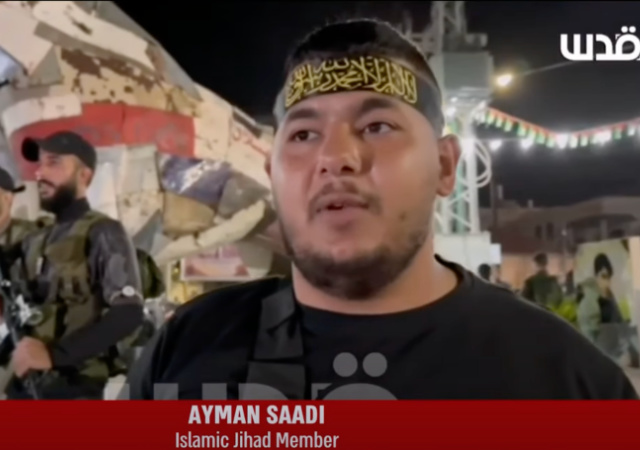 The Israeli security forces have killed a terrorist who masterminded the recent abduction of an Israeli teenager’s body from a West Bank hospital.

Mohammed Ayman al-Saadi, a Palestinian Islamic Jihad (PIJ) terror operative, was the “mastermind” behind the snatching of the body of a 17-year-old Israeli-Druze boy who was rushed for emergency surgeries to a West Bank hospital following a car crash nearby, the Israeli media reported.

Ayman al-Saadi was among the two terrorists eliminated during an overnight counter-terrorism strike by the ID, the media reports on Thursday confirmed. Several wanted terrorists were also reportedly arrested during the operation that took place in the Palestinian terrorist stronghold of Jenin.

Last Tuesday, Palestinian gunmen stormed a hospital, removing the boy’s body from life-support and abducting his body. They wanted Israel to release convicted terrorists in exchange for the teenager’s body.

The Palestinian terrorists were forced to release the body only after Israeli-Druze, a non-Muslim monitory in Israel that loyally serves in the IDF, threatened to march into Jenin to recover the body themselves. The Israeli military also vowed to conduct “large-scale operation” in Jenin, a terrorist stronghold, if the body was not returned to the family.

Large protests by members of the Druze community threatening to arrive at Jenin (PA) if the body of Tiran Pero, who was disconnected from the life support and kidnapped, is not recovered by morning (unknown credit, transferred via WhatsApp, I will try to add credit later) pic.twitter.com/mdLQWJC9gx

Two Palestinian terror group fighters were killed in clashes with Israeli troops that broke out during a pre-dawn IDF raid on a suburb of the northern West Bank city of Jenin.

The shootout in the village of Wadi Burqin ensued during a crackdown on wanted persons suspected of involvement in terrorist activity. Five suspects were arrested including Islamic Jihad operative Wassam Faiz who planned to detonate a car bomb against Israeli targets

Muhammad Ayman Al-Saadi,
Am Islamic Jihad commander, was one of the people behind the death and the kidnapping of the Israeli Druze youth Tiran Peru from the hospital,
Tonight he was eliminated. pic.twitter.com/dxFB5Q6H96

The Times of Israel reported the slain PIJ terrorist’s link to the body snatching incident:

A senior Palestinian terror operative killed during overnight clashes with Israeli troops near Jenin helped mastermind the recent kidnapping of Israeli teenager Tiran Fero’s body from a hospital in the West Bank city, according to a report Thursday.

Fero, a 17-year-old member of the Druze minority, was critically injured in a car crash in Jenin and taken to a hospital there, where he died and his body was snatched by unidentified gunmen.

Mohammed Ayman Saadi, a field commander for Palestinian Islamic Jihad, was present during last week’s abduction, the Ynet news site reported. He was involved in the act’s planning and in the decision where to hide the body, and directed the negotiations with the Palestinian Authority to release it, the report said.

A report last week said the head of the armed group that kidnapped Fero’s body was related to Zakaria Zubeidi, but he was affiliated with PIJ. Various armed factions are known to work together in Jenin against the Israel Defense Forces.

Photos Thursday from the funeral procession in Jenin for Zubeidi and Saadi showed both their bodies draped in PIJ flags.

Eliminating senior Islamic Jihad (PIJ) operatives could lead the enraged terrorists in Gaza to fire rockets at Israeli civilians, Israel’s security agencies believe. “Several army and intelligence sources [said] on Thursday that there is suspicion of possible rocket launches from the Gaza Strip after two Palestinian terrorists were killed in clashes with the Israeli military (IDF) in the West Bank,” the Israeli TV channel i24News reported.

The Iran-funded PIJ, which operates a Jenin and other West Bank cities, also coordinates terrorist operations with the Gaza-based Islamic terror group Hamas. In early November, the PIJ fired a rocket barrage into southern Israel, prompting the IDF to destroy a Gaza rocket factory.

Good news, but, with these Arab Muslim terrorist thugs being perennially enabled and lionized by European Leftists and American Dhimmi-crats who despicably pay deference to their fallacious and contrived victimhood propaganda mythologies, this game of whack-a-mole has gone on for longer than it would have if these useful idiot, western dhimmis finally stopped treating the terrorists as victims animated by legitimate grievances, and, instead, acknowledged that the terrorists’ hatred and violence is grounded in the supremacist, totalitarian and belligerent pathologies that are intrinsic to the ideology of “Submission.”

Taking out the trash. I still hope to live to see the head of the snake cut off and watch images of the Iranian mullahs swinging from lampposts.

“Last Tuesday, Palestinian gunmen stormed a hospital, removing the boy’s body from life-support and abducting his body. They wanted Israel to release convicted terrorists in exchange for the teenager’s body.”

They should definitely trade the bodies of the convicted terrorists for the body of that teen.

I think a 1:10 exchange rate would be good for starters. Just go Full Untouchables on them.

The Palestinians have two distinct groups, Hamas in Gaza and Fatah in the West Bank, who can’t even form a unity government. Whom could Israel possibly make a deal with? Israel has no peace partner! And let’s look at the distinct areas of Gaza and the West Bank. What sort of nation-building have these two areas done to show the world they are ready for a nation of their own should they even reach an agreement between themselves? Where is the infrastructure? Why has corruption run rampant at unprecedented levels? How is it permissible for Palestinian terrorists to be given pensions for killing their neighbors in Israel? Why are town squares and high schools in Palestinian areas named after suicide bombers who murder women and children? Is this the hallmark of a nation that is needed, especially in such a volatile area of the world? Would any country want this potential nation as a neighbor? Instead of building a state with its attendant political and economic institutions, they spent the better part of a decade turning Gaza into a massive military base, brimming with terror weapons, to make ceaseless war on Israel.
At this juncture, the Palestinians are incapable of statehood, based on the basic facts on the ground. One merely has to view what they have done, where they are, and their inability to have one voice. The Palestinians have been given offers of sovereignty an exhausting number of times over decades, enough is enough. The world needs to move on and live, as do the Palestinian people. Maybe one day they will be ready for a state, but playing victim and terrorizing their neighbors should not be rewarded with a pass to a nation of their own. It is time for Israel to reclaim its Land of Israel by removing all Arabs from the land in order to make a Jewish state with a Jewish majority viable from the Mediterranean Sea to the Jordan River. Israel should be established in this area and nothing else. In other words, no other state between the sea and the river.

Why does every story I see about this keep saying they ‘stole his body?’

All of the stories make it clear that they MURDERED him and THEN stole his body?

I’m a little confused by the reporting, too. They say that they removed his body from life support and took him away where he died and also that he was taken to the hospital where he died and his body was taken out. So, did the terrorists murder him in the hospital or did he live while they took him to Jenin? Maybe he was on life support, the terrorists stormed the hospital and removed him from life support not knowing just what bad shape he was in assuming they could hold him hostage for a number of days but he died before leaving and they took him anyways trying to salvage something from the situation.

What, he was killed without the aid of a tunnel collapse?

Sort of a feel good story. A feel great story would be killing terrorists without Israel’s youth being murdered.

Iran loves the terrorists. Getting near time to round up the Pali’s and ship them all to Iran and let them deal with them. Considering they have been kicked out of every country they showed up in (Egypt, Jordan, Lebanon) I’m sure that would keep the Iranians occupied for some time during which the Israeli’s can settle Jenin and all the other corrupt terrorist hellholes.

Good riddance! To paraphrase a greTi r from The Searchers, the only good terrorist is a dead one