Hillary Puts Pro-Lifers in the Same Category as Iran, Taliban, and Russian Soldiers

Hillary Puts Pro-Lifers in the Same Category as Iran, Taliban, and Russian Soldiers

“Literally under attack in places like Iran or Afghanistan or Ukraine where rape is a tactic of war, or under attacks by political and cultural forces in a country like our own when it comes to women’s health care and bodily autonomy.” 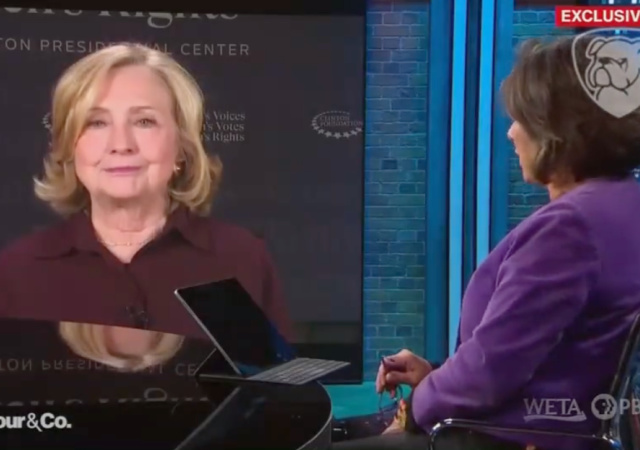 Christine Amanpour had Hillary on her program Amanpour and Company to promote “a summit on the status of women’s rights around the world” at the Clinton Presidential Center in Arkansas.

Remember, the presidential center is named for Hillary’s husband, Bill, not her. Not Hillary because President Donald Trump destroyed her in 2016.

Since September, women have been protesting the Iranian regime after a woman died in police custody. The “morality police” arrested her because she did not wear a veil, which is required in Iran.

We all know the Taliban treat women as objects, deny them education, etc. There are reports of Russian soldiers raping Ukrainian women in villages they have taken over.

But to Hillary, those who are against killing unborn human beings are on the same level as those three.

Amanpour had no problem with the ridiculous comparison. From MRC (emphasis mine):

HILLARY CLINTON: Well, what I think, Christiane, is that we have come a long way si [sic] I made that statement back in 1995 on so many fronts. But we are also in a period of time where there is a lot of pushback and much of the progress that has been, I think, taken for granted by too many people is under attack. Literally under attack in places like Iran or Afghanistan or Ukraine where rape is a tactic of war, or under attacks by political and cultural forces in a country like our own when it comes to women’s health care and bodily autonomy.

AMANPOUR: We’re going to go around the world with you in a second. But first, about — precisely what you’re talking about and where you are. Arkansas itself, I believe, rapidly moved to make a woman’s right to choose illegal in your state or your former home state and you are hosting this conference. Talk to me about the confluence of both these events. This pushback on American women’s rights at the same time as you’re trying to figure a way forward.

CLINTON: Well, you’re absolutely right. We are here at the Clinton Presidential Center. With an exhibit that is just astonishing and the breadth and depth of its look at the history of the fight for the vote. To raise our voices. To claim our rights. And I think that’s a conversation that should happen everywhere.

Not just with people who agree with you. But we have work to do to try to defend our rights, to stand up for them. And what we’ve seen particularly since the Dobbs decision across our country is that when voters, both men and women, but led by women have a chance to vote on these draconian abortion restrictions. They do not accept them. They overturned them. They certainly want to limit the reach of the government into the most intimate, private parts of our life.

Hillary is excited about the exhibit and hopes it keeps “the conversation going.”

Amanpour happily jumped on that thought (emphasis mine):

AMANPOUR: So, let me ask you about that because, you know, keep the conversation going. Persuade everybody, et cetera. But, I mean, how much persuasion can we expect when it comes to our — and I’m speaking as a woman, basic rights. Whether it’s in the United States or around the world.

As you said, they are human rights. At what point should these be enshrined even in the American law and Constitution even. I mean, I’m probably exaggerating. But it’s extraordinary in 2022 that this basic right of women, half the world’s population is still at risk.

CLINTON: Well, you’re right and it’s why the United States Congress just this week passed a federal law protecting the right of gay marriage, the right of interracial marriage. To try to enshrine at least a federal right to those fundamental human rights. And I think we have to have that conversation going because, as you could see, with that vote in the Senate, I think, a dozen Republicans voted with all the Democrats. That would not have happened 10 years, 20 years ago. I know.

So, in a democracy when things don’t go your way, when you suffer setbacks, you need to remember that there is no permanent political victory or defeat. You have to keep fighting for these fundamental rights. You have to try to enshrine them in law as best you can. And in our system, at both the federal and the state level.

Hillary Clinton goes on PBS and compares pro-lifers to the Iranian regime, the Taliban, and Russian soldiers raping Ukrainian women. Of course, Christiane Amanpour agrees, "This pushback on American women's rights at the same time as you're trying to figure a way forward." pic.twitter.com/5GznH9uK01

Is the kettle going to hang itself now?

A ‘right’ claimed exclusively for 1/2 the population is not a human right. It’s nice though that totalitarians, crooked grifters and others who seek to subjugate us are finally operating in the open where everyone can see exactly what they want.

Hey Hillary, you know what’s funny? You will NEVER be POTUS, you vile, lying, grifting c*nt. Now shut your f*cking mouth because every time you open it I’m smelling something nasty and musky. I’m pretty sure it’s Trump’s nut cheese.

And once more PBS demonstrates why we should use taxs to fund PBS,

Hillary puts me in same category as Iran, Taliban and Russian soldiers. I’m not going to tell you what category I put her in. However, I will entertain guesses.

Such a hate-filled woman. And there are still people who wish she’d won in 2016.

Easily the best thing Donald Trump accompanied is to be sure the Hildebeast never has a Presidential Library.

Back in the mid-90s, the Clintons were touring Chicago, and stopped for gas near Hillary’s old neighborhood. When Hillary caught sight of the station owner, she got out of the car and greeted him quite warmly. Later, Bill asked her what that was about. “That was Roger. We went to high school together. I dated him for a while, we were quite an item.” Bill chuckled. “Just think, if you had married Roger, someone else would be First Lady now.” “Actually,” Hillary replied, “I’d still be First Lady, but you’d be pumping gas in Arkansas.’

Spike Cohen:
A silver lining to the Biden administration labeling Libertarians terrorists is that the CIA will probably start giving us money and weapons now.

Why not? You help them get elected all the time?

No, they don’t. Every single survey to look at this has found that the Libertarian Party draws about equally from Republicans and Democrats.

What a false and completely irrelevant person.

She could have turned to mulch years ago and been more of a positive to the human race now.

What does that say about the platforms which continue to give her a voice?

I can’t wait until she is not capable of doing any damage to the country. We would have been worse than now if she won in 2016

I appreciate that you continue to refer to her as “Failed Democratic presidential candidate Hillary Clinton.” It’s probably time to just skip straight to Trump’s catchall description, “Crooked Hillary.”

You would expect nothing less from a pro-slave admirer of Margaret Sanger.

Coming from the woman that completely destabilized Libya, resulting in the invasion of Europe by “refugees,” she should really shut her pie hole.

So true. And, the whole reason she, Sammie Power, and the rest of team O destabllized Libya was to tell Dubya Bush “anything you can do, I can do better!”–including making a foreign policy disaster.

Too bad her mom didn’t practice a little abortion.

Democrats; HOW DARE TRUMP RIP BABIES FROM THE ARMS OF MOTHERS AT THE SOUTHERN BORDER!!!

Also Democrats: HOW DAAAAAARE YOU STOP US FROM RIPPING FETI FROM THE WOMBS OF BIRTHING HUMANS!!!

Oh, Biden’s found a great way to keep those cages from filling up with children.
He ships them to cartel pimps.

“I think you need to understand. We only get sued if we keep kids in care too long. We don’t get sued by traffickers. Are you clear?”

She talks about rights but doesn’t mention responsibilities, such as bearing a child and raising that person to be a responsible, productive member of society.
.

“Kill babies! Reduce the useless population! As long as the babies killed are brown and black, and poor whites, the most useless people in society!”

Note to POC. I am confused as to why you would support a party that demands that you lay your baby on the altar of abortion on demand. But keep doing it. You are making leftist white women in the suburbs very happy. At least they won’t have to send money your way.

Amanpour is another journo who followed the Rachel Maddow track.

I watched Maddow before she hit broad fame. She clearly had a PoV, but was none of a provocateur, apparatchik, or hack. She did actual interviews, and reporting uncovering actual facts. (It’s true. Also in The Before Times MTV played music, Prince was the weird one — not MJ, and Saturday Night Live was mostly funny.)

Maddow went full ‘Evil Booooooosh!” during the first Bush-the-Younger term. I’m not a fan of Shrub, but things happen in the world not directed from the White House, even in his term.

Amanpour was at one time a very useful source for all of what was happening in some weird, complex, consequential part of the world. Then, she went all “tag the bad guys” which got turned up to 11 when The Dowager Empress managed to anti-campaign herself out of a coronation. She forgot the “constitutional” part of “constitutional Republic.’ Sad.

We could use Amanpour 1.0 in Ukraine these days, but that version’s long gone. Sad.

These are two women that cannot see any view but the Left. The push by the Dems on Abortion has become their only issue since the Supreme Court ended the flawed national ruling by an earlier Supreme Court and gave the rulings back to the states. All Dems want abortion to be in poor areas and have the abortion clinics in Black and Hispanic areas as they love Margaret Sanger. Hillary will never become POTUS but will continue to try as it will bring money into the Clinton fold.

It’s alright. I don’t care what she says. She’s a hater. Her hatred is directed at people like me. I expect incivility and indecency from people like her. I don’t even notice her.

It is interesting and revealing that, to my knowledge, only ONE Catholic Bishop has taken issue with HRC’s statement that anti-abortion Catholics = Taliban. Another instance of great leadership from Pope Francis.