The wrapping paper is excellent, but Freedom Speaks Up has other patriotic items. 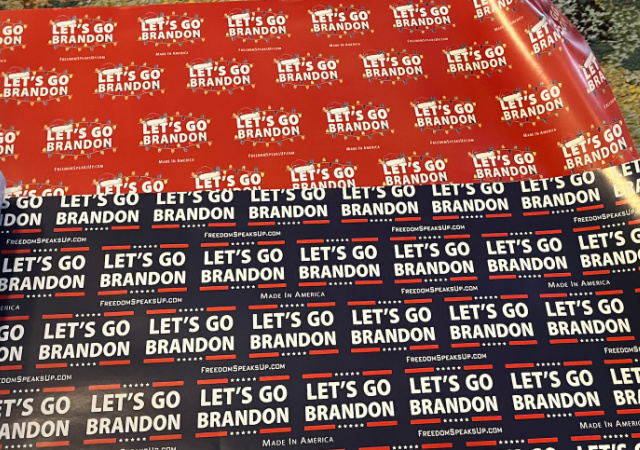 I started writing about the amazing sales numbers at Freedom Speaks Up regarding its Let’s Go Brandon wrapping paper a week ago but stopped because I ordered some of the paper and my parents a canvas of the Constitution.

I wanted to finish when I received the paper, and my parents got their present.

The items came in Thursday and Saturday! First, let me tell you, the Let’s Go Brandon wrapping paper is some of the best quality. It’s thick, smooth, and bright. I doubt sharp corners or weirdly shaped items will bust a hole through it. Second, it’s cheerful! 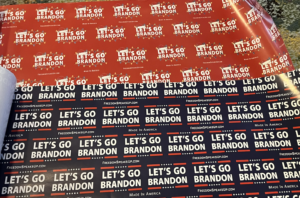 My parents plan to proudly display the Constitution! 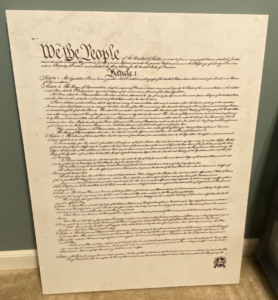 We all know the history of Let’s Go Brandon which started last year. We even marked the anniversary.

After the catchphrase took off, Weathers developed Let’s Go Brandon wrapping paper. The company made $1 million after selling 500,000 square feet (over 6,000 pounds) of paper.

The Washington Examiner reported that Weathers expanded his company and changed it to Freedom Speaks Up from BringAmmo.com after “Washington Secrets first reported on his company last year.”

It paid off because now Weathers believes sales will hit $2 million from the paper:

“We’re having tons of fun with this, there’s no way to spend $20 bucks and get more smiles on Christmas morning,” Weathers said in a statement.

But Freedom Speaks Up has a lot more than just the wrapping paper that put the company on the map. (I have to give a shout-out to my mom, aunt, uncle, and cousin, who introduced me to the paper last year!)

Grump! This article would have be way more useful at the BEGINNING of the month!

No worries. Buy some for next year. Assuming you have storage space, you’ll probably end up saving $$ on inflation. And even if Brandon’s no longer in the White House, and you decide not to use the gift wrapping, you’ll still have a collector’s item. Perhaps a family keepsake to remind of the bad old days

I’m too old any more to wait for collectors’ items to age. I’ve saved a pack of Kennedy Camelot playing cards for 60 years old and they’re still worth bupkis.

FJB and his Marxist minions.