It’s especially bad for babies who need a special formula. 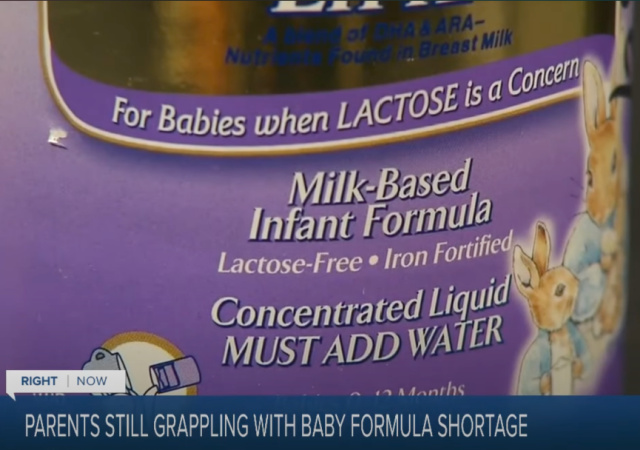 Reckitt, which makes Enfamil, thinks the baby formula shortage will continue to spring 2023.

The shortage began earlier this year when an Abbott Nutrition plant shut down in Michigan “due to reports of infants being hospitalized after consuming products from the facility.”

President Joe Biden’s administration tried to help with “Operation Fly Formula.” But the government hasn’t made any shipments since September.

Do you mean the government intervention doesn’t help? This libertarian is totes shocked!

Hannah Kroll, a mother of two, said on Varney & Co.:

“Parents can only buy two to four containers of formula at a time, depending on the store and those rules. That lasts a family about a week, a week and a half,” she explained.

She also said parents are not able to substitute certain brands, namely those in need of hypoallergenic formulas.

“Parents whose children are on Alimentum formulas or hypoallergenic formulas are not able to switch – and right now those are the ones that we are very much missing,” she stressed.

Thankfully some mothers can supplement with some breast milk.

From 10News in San Diego:

Laura Holloway’s 8-month-old son, T.J., is the center of her world.

“It’s a huge change, a wonderful change and there’s so much to think about. So much to worry about,” said Holloway. “Being able to feed your child — that isn’t something parents should have to worry about.”

But that became her family’s reality earlier this year, when a baby formula shortage stole her sense of security.

“It was terrifying,” said Holloway. “Our baby also got breast milk, and still does. And we got to a point where we were talking about rationing. Like, ‘This much breast milk, so we have this much formula left.’ It was just crazy.”

The good news? Parents and grocery stores say more formula is back on the shelves. But still, market research firm IRI says 12.5% of baby formula powders around the country are out of stock.

“I had the chance to talk to other parents looking for formula. They’re looking for different brands. You know, for kids who have allergies. And they’ve told me that those are still really hard to find,” said Holloway. “I can’t imagine the stress. It was hard on us for sure, but those poor parents.”

But you must remember some women cannot breastfeed, or they can, but the baby has a sensitive stomach.

For the last ten weeks, Kristi and Justin Weber have been focused on how to provide for their newborn baby boy.

“I think he may have fallen asleep here on dad,” said Kristi.

Reis is the Webers’ third child, and they had everything prepared – until Reis needed a special formula.

“Learning from our past boys that there’s a dairy protein that they are unable to tolerate. So regular formula doesn’t work for us for supplementing,” said Kristi.

Special types of formulas are getting increasingly hard to find.

The Emergency Infant Services has experienced a record-breaking year. Parents drive for hours and even have to switch formula brands:

FOX23 heard from dozens of mothers who have been impacted by the shortage. One mother said she had formula sent from out of state. Others said they drove hours, or to multiple stores to find it.

Some mothers say they’ve been forced to switch to other brands to make sure their infant is fed.

Jacky Escobedo is the Social Services Director at Emergency Infant Services. She says they are having a record-breaking year due to the shortage and inflation.

Escobedo is reminding parents to be cautious about switching formula brands.

“We definitely recommend that families are speaking with their pediatrician, that what they are using is an equivalent and safe for the baby to use,” said Escobedo. “Just making sure that it’s not something that could cause more damage.”

“Even with help from Biden …”

I think I found your problem right here.

“Even With Help From Biden the Baby Formula Shortage is Expected to Last Until Spring 2023”
Reminds me of the studies showing how the New Deal actually lengthened the Depression.

I don’t suppose babies born to any of the millions of illegal immigrants who fill up the maternity wards in the hospitals across the country have anything to do with it.

Just check out all the ER’s and ICU’s, 95% illegals

Spring 2023??!!?? That’s optimistic. Between economic collapse, energy shortages, political unrest, and collapsing supply chains [we have a shortage of diesel fuel, among other things. Trains and semi’s run on diesel.] Further, businesses are shutting down, which complicates things even more.

I think they prefer aborting them, although it may be a toss up for your average democrat. Thanks, Georgia, for putting democrats in charge of the senate, you should be proud of yourselves.

“Nothing makes Leftists happier than starving babies.” For once, it is not for the children…but for the planet! Less eaters and less CO2 emitters will fight climate change. I fully believe in global warming. In a few billion years the expanding sun will engulf the earth…. and nothing can stop that. For now, the winters in the northern hemisphere will bring more snow to add to hunger, cold, suffering and economic collapse…..but not for a certain basement in Delaware where there will be warmth and food to share with Uncle Joe.

Gosh it’s almost like they did exactly what I said.

Did ABSOLUTELY NOTHING to solve the problem and just staged a couple idiotic photo ops with their stupid airlifts that didn’t even make up a fraction of the supply needed, and the counted on the press to drop the issue after the photo op and never being it up again.

I think it worthwhile to point out that the enforced shutdown of the Abbott plant was based on zero evidence that the outbreak originated in the plant (they knew that more than one baby had never had Abbott formula) and continued long after it was proved that there was no trace of the outbreak pathogen in the plant.

FDA’s feeble reasoning was that because another, unrelated pathogen was found in a non-production area (i.e. a ladies bathroom in the office block) that the shutdown should continue, and did… until political pressure forced the re-opening of the plant.

Government caused the formula problem, continued it and now is incapable of solving it.

The question should then be “why did the FDA want a nationwide formula shortage?” It has no obvious connection to the WEF agenda.

Petty bureaucratism flexing its flabby muscles may be all the reason necessary. Dealt with these people in the dairy products industry at both the state and local level for years, and its clear that many inspectors are in love with the power they hold over industry.

There is no higher authority you can appeal to, and they ALWAYS support their own, even when egregious mistakes are made. Its a hellacious system and does little toward ensuring food safety.

I think they’ve under-estimated the impact of the President-ish’s help.

Can we set up a betting pool?