President Joe Biden told the Democrats he wanted South Carolina to be the first primary state to “ensure that voters of color have a voice in choosing our nominee much earlier in the process and throughout the entire early window.” 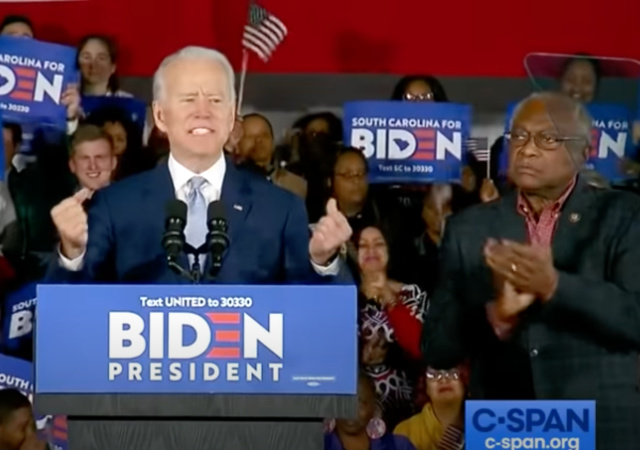 Under the new arrangement, the Palmetto State would hold its primary on Feb. 3, 2024. Nevada and New Hampshire will hold their primaries three days later, with Georgia due up Feb. 13 and Michigan following on Feb. 27.

The Iowa caucuses have been the first in the nation since 1972, while New Hampshire has led the way on the primary calendar since 1920. Republicans have already said that their 2024 nominating contests will follow the traditional order of Iowa, New Hampshire, Nevada and South Carolina.

The changes voted on Friday will still have to be approved by the full DNC in a vote likely early next year, but it will almost certainly follow the Rules and Bylaws Committee’s lead.

President Joe Biden told the Democrats he wanted South Carolina to be the first primary state to “ensure that voters of color have a voice in choosing our nominee much earlier in the process and throughout the entire early window.”

I wonder if Rep. James Clyburn (D-SC) had anything to do with Biden’s decision.

Clyburn is the #3 Democrat in the House. During the 2020 primary, Clyburn said he would endorse Biden if he promised to nominate a black woman to the Supreme Court.

James Clyburn, the No. 3 US House Democrat credited with boosting Joe Biden’s 2020 campaign, said the president called him Thursday to say he was recommending that South Carolina replace Iowa as the first nominating contest.

“He called me yesterday, before the dinner and he told me that’s what his decision was and I thanked him. And I told him I would see him later on in the evening and that was it. I was surprised,” Clyburn said in an interview Friday.

Holy crap, if they actually follow through with knocking Iowa off their high horse then maybe we can kill off ethanol. As it is the Presidential candidates and every Senator or member of the HoR who wants to be President is too scared of the Iowa caucus voters to do it.

I was thinking the same thing. Would be good for food prices, and good for internal combustion engines.

Aren’t we all voters “of color?”

The racist, race-obsessed Dumb-o-crats are the single largest and most stubborn obstacle to racial progress in the U.S., without a doubt. They will never acknowledge a scintilla of racial progress to be acknowledged, or, to take place. They are committed to the perpetual racial Balkanization of the U.S., via their racist and corrosive racial obsessions.

The Sons of the Green Mountain Boys are assembling as we speak, in Dixon’s Notch.

Now that michigan has gone over to being cali jr, they’ll cheat even more. I think I’m going to have to declare being a democrat and vote for the worst possible candidate.

I don’t have a problem with this though the reasoning behind it is garbage.

I think the primary dates for each state should be chosen before each election by drawing lots. That way it’s random and more fair.

Well, once they were forced to let black people vote, it was only a matter of time til the D-party decided that their votes matter.