Whelan’s brother congratulated Griner but also said: “How do you continue to survive, day after day, when you know that your government has failed twice to free you from a foreign prison?” 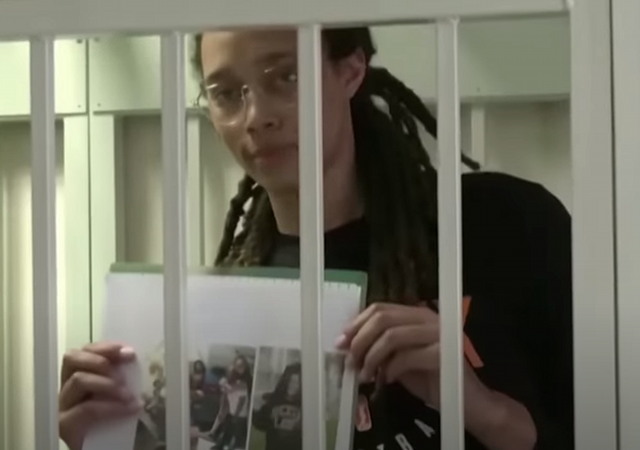 Griner was arrested at Sheremetyevo Airport in Moscow on Feb. 17 after Russian authorities said she had vape cartridges with cannabis oil inside her luggage. On Aug. 4, Griner was given a nine-year sentence after pleading guilty, arguing that she had been prescribed cannabis for her pain and inadvertently packed it. Her sentence was upheld in October, and she was later transferred to a penal colony.

Bout is known as the “Merchant of Death” and the possible swap for him was floated back in May. He was in the middle of a 25-year sentence in federal prison after he was convicted of conspiracy to kill Americans relating to the support of a Colombian terrorist organization.

He was dubbed the “Merchant of Death” because of his notoriety for running a fleet of aging Soviet-era cargo planes to conflict-ridden hotspots in Africa. His dealings inspired the Nicolas Cage film “Lord of War.”

But, once again, the United States government leaves behind Marine Paul Whelan.

The administration tried to offer 2-for-1, and when Russia said no, the officials said 2-for-2.

When Russia insisted on a 1-for-1, the American officials picked Griner.

Whelan is going on his fourth year in Russian captivity. They arrested him at a Moscow hotel in 2018, accusing him of spying.

A court convicted Whelan of espionage in June 2020.

Biden said the White House has “not forgotten about” Whelan.

Whelan’s brother David congratulated Griner on her release. However, he reminded everyone that this is “the second time the Biden administration had left behind Paul in a prison exchange, with the last instance coming in April.

David wrote: “How do you continue to survive, day after day, when you know that your government has failed twice to free you from a foreign prison?”

MORE: To secure Griner’s return, Biden has freed arms dealer Viktor Bout. Bout gained infamy as the “Merchant of Death” & was found guilty for conspiring to sell AK-47’s that would’ve been used to kill DEA agents.

MORE: Sources tell @CBSNews that news reports that the US proposed a 2-for-1 swap (Griner & Wheelan / Bout) were incorrect, and that in fact, the US had offered a 2-for-2. The Russians insisted on 1-for-1.

Moments ago I spoke to Brittney Griner.

So, the administration frees two people who hate America in a single bad deal for us?

They hate us. No doubt about it at all.

So does Griner—coming home to a land whose flag he despises.

Oddly, right after the Georgia election. What strange timing. Besides, Brandon gave $80 Billion of advanced weaponry to the Taliban so what did you expect.

Anti-gun, but frees an arms dealer.

Is that the “Lord of War” guy played by Nicholas Cage?

Its rather instructive on this Administrations priorities that they released the woke, hate America, lesbo instead of the marine. I guess they had feed back from various focus groups that the optics of getting Greener back first were better than getting the marine released.

Not only that but they freed the woman who had been there far less time and would have served far less time than the marine will unless there is an intervention for his freedom.

Wait, I must correct myself as I called it a woman. It is literally the best pronoun for someone that thinks they can wake up and be different genders on different days (no lie, this is what the crazy woke creature actually believes about itself…receipts online).

The administration narrative is Russia gave them a flat no on releasing the Marine, no matter what or who else they offered. So ‘m willing to let that explanation hang fire until it gets disproven. And right about now, I’d accept Putin saying otherwise in a TV interview as proof, over anything from Clown World on The Potomac.

This “exchange” by a D president has a ring of been-there,

Ya might get the idea that the Democrat Party hates the USA, lies when its elected members take the Article VI oath, and would like to have total government control of every aspect of life. Ya know, like Hitler, Stalin, Mao.

Biden is looking through the lens of his 2024 reelection bid. Griner appeals to his base: the LGBTQ+ community, Hollywood, and the celebrity athletes are thrilled meaning more contributions for his run. Cheating a win in an election is an expensive proposition and he needs all the money he can get.

KJP probably had a hissy fit. After she checked her notes, of course.

Griner appeals to a certain democrat political base. Duh.

After the Great Warnock “victory” Griner being released was a given.

After a court-martial conviction in January 2008 on multiple counts “related to larceny”, he was sentenced to 60 days restriction, reduction to pay grade E-4, and a bad conduct discharge. The specific charges against him included attempting to steal more than $10,000 in 2006 in Iraq and using a false Social Security number to create a false account on a government computer system to grade his own examinations.

As our Drill Instructors used to tell us, in any group of people there are always 10% who are sh*theads, even in the Marines.

He did indeed get the Big Chicken Dinner. Not a paragon of virtue but a spy deserving to be locked up in a cell? Doubtful unless his military troubles was a long term plan by the CIA to convince Russia he was a disaffected American with a grudge….hmmmm……

I’m certainly not trying to make a case for Griner to be released (at all), much less released before Whelan. But let’s not ignore what he really was while souping up the argument with emotive terms that patently do not apply to him like “hero”.

He was an admin clerk in the Corps before he was court martialled for theft and fraud, then booted out with a discharge that ranks just a hair above the one Bergdahl got for desertion in the face of the enemy. Ask any Marine you know if they consider him a hero with that record. The chances of him being hired by the CIA were exactly nil based on his conviction alone.

Don’t want to be used as a pawn in an international game? Then don’t screw around in an unfriendly country doing dangerous things with zero training in doing so. Don’t be a Walter Mitty ‘secret agent’ carrying around $80,000 in cash and a thumb drive containing info the Russians consider sensitive while on a supposed wedding trip to Moscow. Real CIA agents have diplomatic cover, he had none, thus he is in Lefortovo Prison in Moscow.

He’s not a spy for his country and he’s not a “hero”. He deserves the same support from our Govt as any other US citizen who gets themselves in trouble overseas. No more, no less.

“The chances of him being hired by the CIA were exactly nil based on his conviction alone.”
Or he was hired by the CIA first, and THEN had those charges spun up as part of his cover.
You aren’t paranoid enough.

There was a time when “little o” was the most despised person on the left….In less than 2 years joey has surpassed him.

I expected nothing less. With the USA viewing athletes as second only to gods, this choice was easy to make.

Entitled sport player vs some tourist who – through igornance – did Something Wrong: the tourist.

I’m going to go with gross negligence and general “f around find outedness” considering she played in a league there since 2014.

I’ve been all over the planet in and out of uniform. Know the laws wherever you go as some countries don’t play around and are not overly friendly with the US. Think stealing a poster for a memento is a little thing? Ask that kids parents after he came back from N.Korea braindead. A little graffiti? Slap on the wrist? Ask that kid how his caning in Singapore went.

Well, they’re illegal here, too.
So she had no idea stuff like that actually got ENFORCED..

Especially if he actually was spying for us, that would mean he served his country and was called back and answered the call to serve again.

If the USA views Griner as god, then this country is as far gone as I have feared.

She’s a WNBA player. Most people have no idea who she is.

What is the WNBA?

I suspect that Paul Whelan would have been home already if he was wearing drag clothes, using lipstick, changed his pronouns, etc.

Only 3 pronouns matter, She He IT

Doper-Marine?
Marine-Doper?
And Slow Joe’s regime picks the doper. No surprise for the anti American bunch.

Months ago Russia said no to a prisoner swap. So besides the prisoner, what else did Biden have to give Russia that we don’t know about?

Maybe Putin promised the same hookers that peed on Trump’s bed would do the same for him? Or it’s payback for the millions that Russian Mayor’s wife threw at Hunter in a paper bag?

A privileged protected-class “celeb” (WNBA is a stretch) plays fast, loose and dumb with laws of another country (with serious history of banging heads) and gets turned into a pawn only a US President can solve. Of course, after the election so no fallout for 2022 elections.

I imagine the deal is a thousand times worse than it appears. What else did the administration give Russia?

I wonder how much Russia has on Brandon via Hunter. We know Ukraine has a ton which explains the $100 Billion taxpayer money his payoff to China forcing the USA to buy Chinese Solar Panels while destroying our oil and gas industry and handing them all those tasty mineral deposits in Afghanistan with a large airport to fly in and out.

What’s not to love

I heard they swapped Griner for a man.

Well, you know what they say: Black Lives Matter.

There is no black, gay, pro athlete privilege. None….I wonder if she will thank America for saving her bacon or go back to bashing this country and flag. Don’t answer that.

This is outrageous. So a patriotic soldier who is later called back by his country to do an honorable and essential job (spying on a hostile power in difficult circumstances) matters less than a celebrity that actively detests our American traditions and regularly reduces the nation to series of racial groups who brings drugs to a country known for punishing drug offences severely?

One is a hero, the other……why on Earth did she get priority?

It isn’t illegitimate that Biden has priorities on who matters more, it is those priorities that is at issue.

Even if you don’t think he was actually spying for the United States so what he is still a former marine.

Now see, if I were a sporting person, I’d open an office pool right now.
There are so many possibilities for revenue!
How long will it take before Griner opens her yap again about how evil America is?
How bad will the smackdown be from normies when she does?
You can’t win if you don’t play!