In my JNS column, I argue that the White House meeting is designed “to give the impression the administration cares about increasing crime against Jews, when the evidence is, it doesn’t.” 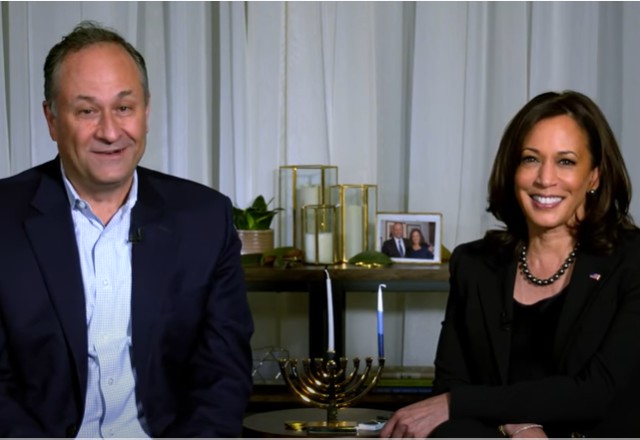 On Wednesday, December 7, Second Gentleman Douglas Emhoff will host a roundtable with Jewish leaders to discuss antisemitism. I wrote a column about it published by Jewish News Syndicate.

I was trying to figure out what Emhoff’s qualifications were to lead the session, and why President Biden didn’t delegate it to a senior White House aide. The column was the result.

This Wednesday @SecondGentleman will convene a roundtable at the White House to discuss efforts to combat antisemitism. He will be joined by @StateSEAS, @AmbRice46, and @KeishaBottoms.https://t.co/5TdhQ3y1vV

The background is, as hate crimes – including attacks on ultra-Orthodox and other Jews – have spiked, President Biden and Vice President Harris have mouthed occasional generalized condemnations of antisemitism. But, they’ve been reluctant to call out its perpetrators by name – except, of course, when they are or support the president’s political opponents. They have completely failed to take on antisemitism within their own camp. The White House hosted a hate-crimes summit in September, but failed to invite many leaders from the New York City Orthodox communities that have been so hard-hit by antisemitism.

Antisemitism is allegedly the motive for the Oct. 5 murder of University of Arizona Professor Thomas Meixner by a graduate student. The head of Secure Community Network publicly charged the murder could have been prevented if antisemitism were taken more seriously. Last April, two Lakewood Jews were critically injured in carjacking/ramming/stabbing attacks. In February, a Jewish Kentucky mayoral candidate was shot at. Last month, two men were arrested for planning to attack New York synagogues. An 18-year-old New Jersey high-schooler was arrested for threatening to attack Jews.

In New York City, it’s the most frequent hate-crime motive. The city reported 45 hate crimes in November, or one every 16 hours. That’s more than twice as many as November 2021. For January-September 2022, the New York Police Department reported 195 anti-Jewish hate crimes.

“From our perspective, we see the Jewish community getting it from all sides,” FBI Director Christopher Wray told the Senate Homeland Security and Governmental Affairs Committee during a Nov. 17 hearing.

Wray has probably seen the FBI’s 2021 hate-crime report. The public hasn’t. FBI statistics are usually released around mid-November to early December. Last year, they came out early—in August (later updated). Not this year…

Maybe the administration is slow-walking it [the FBI hate crimes report], to get ahead of the news cycle. Maybe that’s what Emhoff’s meeting is intended to do.

In reality, Biden’s record on antisemitism is MIA.

After nearly two years in office, Biden has yet to implement Executive Order 13899 on Combating Anti-Semitism. Signed by former President Donald Trump in December 2019, EO 13899 makes it easier to fight campus antisemitism by interpreting anti-discrimination legislation to clarify that it covers antisemitism. While antisemitism spikes on campus, the Department of Education has taken a lackadaisical approach to sanctioning it. It targeted this month—23 months after Biden took office—to issue a rule to amend its administrative regulations to implement EO 13899. To date, it hasn’t issued a proposed rule.

On Dec. 2, Biden tweeted a general condemnation of antisemitism that named no names. He didn’t identify or call out any of the several individuals who have publicly voiced antisemitism. Asked whom Biden was targeting, White House Press Secretary Karine Jean-Pierre refused to answer. Jean-Pierre herself has a dicey history with antisemitism. During the 2020 presidential campaign, she argued that supporting pro-Israel organizations like AIPAC wasn’t progressive. She then worked for MoveOn.org, which supports boycotting AIPAC and opposes anti-BDS laws. As Biden’s press secretary, Jean-Pierre has condemned Kanye West and Donald Trump for antisemitism, but said nothing about Kyrie Irving or others on the left.

Emhoff looks like the administration’s latest diversity appointment, selected for his religion. He holds no official position within the administration, and his mixed marriage will probably make him a source of angst rather than comfort for several in the Jewish community, including many ultra-Orthodox Jews who’ve been targeted in hate-crime attacks. On the other hand, it’s unclear whether they’re even invited to the Dec. 7 meeting.

More likely, it’s designed to give a platform to groups like Jonathan Greenblatt’s ADL, which can be relied upon to promote the interests of the progressive left rather than the Jewish people. And to give the impression the administration cares about increasing crime against Jews, when the evidence is, it doesn’t.

Postscript: Early reports indicate that the Emhoff meeting was just as inane as expected. Emhoff held forth about his personal feelings of being “in pain” about rising antisemitism. If any concrete policies were discussed, or if the administration is willing to take on its own supporters rather than simply pointing the finger at its political opponents, it isn’t apparent from reports about the meeting.

The vile Dumb-o-crats are utterly incapable of honestly confronting the virulent and pervasive Jew-hate and Israel hate/slander that now constitutes an unabashed and accepted part of the contemporary Dumb-o-crat ethos. It;s fair to state that the Dumb-o-crats (along with their European, Leftist ideological brethren) constitute the largest repository of Jew-hate outside of the Muslim world.

The Dumb-o-crats now funnel and rationalize their Jew-hate through the most dishonest, ignorant and unfair criticism of Israel, attempting to erase and delegitimize Jews’ historical ties to the middle east (ties which pre-date the founding of the supremacist and totalitarian ideology of “Submission” by millennia, let’s note), while granting contemptible deference and legitimacy to the most transparently fallacious and contrived Arab Muslim propaganda mythologies of alleged victimhood. This is an evil endeavor, make no mistake.

But, in truth, this ethos goes back decades, with the Party unable to summon the basic moral integrity to treat bigoted Jew-haters such as Al Sharpton and Louis Farrakhan as persona non grata, instead continuing to grant these despicable hate-mongers legitimacy, deference and plaudits.

The prominence given by the Dumb-o-crats to unabashed Jew-haters such as the vile Ilhan Omar, Rashida Tlaib, Raphael Warnock, Keith Ellison, Occasional-Cortex and many others, and, the Party’s inability to kick them to the curb, much less issue a scintilla of criticism, speaks to the Dumbs’ manifest moral cowardice and complicity in contemporary Jew-hate.

“I was trying to figure out what Emhoff’s qualifications were to lead the session”
Kamala’s office is a round file that sits on a desk instead of on the rug.
It’s whereJoe puts issues to die in the dark, like border security.

The first gentleman to be Second Gentleman who’s never experienced antisemitism is hosting a seminar on antisemitism. Okay.

Yet Jews, like Blacks, continue to almost exclusively vote Democrat.

Why its almost as if these sections of society have some kind of hard on for abuse??

The presence of an organization “We’re suing the Nazis and white supremacists responsible for the attack on Charlottesville.” (Integrity First for America) — and not one organization that publicly calls out Black, Islamic and BDS Jew-haters says it all.