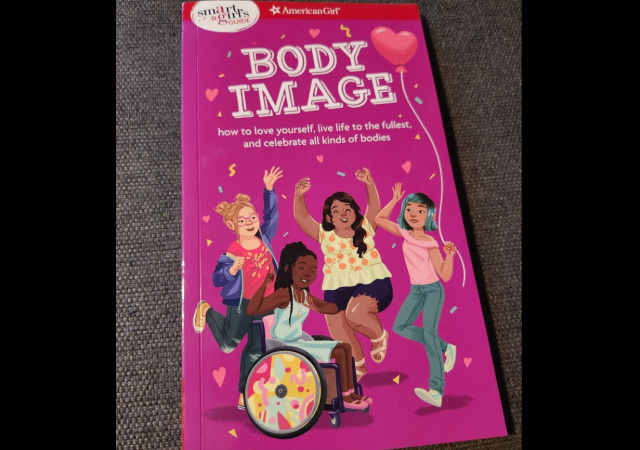 The American Girl book Body Image: How to love yourself, live life to the fullest, and celebrate all kinds of bodies (Smart Girl’s Guides) shows the importance of parents being involved in their child’s life.

The book, meant to help girls be comfortable with their bodies, is filled with leftist nonsense about gender, going behind the parents’ backs to change genders, and normalizing obesity.

Gender does not exist. Only sex: female and male. I cannot remember when gender became the go-to word, but I guess it’s because people felt uncomfortable hearing kids say sex. Even though context matters.

Parents posted pictures from the book so here we go! 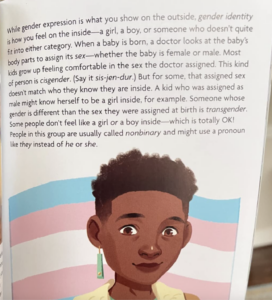 Page 37: “While gender expression is what you show on the outside, gender identity is how you feel on the inside – a girl, a boy, or someone who doesn’t quite fit into either category. When a baby is born, a doctor looks at the baby’s body parts to assign its sex – whether the baby is female or male. Most kids grow up feeling comfortable in the sex the doctor assigned. This kind of person is cisgender.”

The doctor doesn’t “assign” you a sex.

“Someone whose gender is different than the sex they were assigned at birth is transgender. Some people don’t feel like a girl or a boy inside – which is totally OK! People in this group are usually called nonbinary and might use a pronoun like they instead of he or she.” 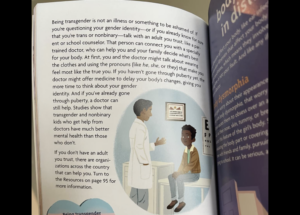 “If you don’t have an adult you trust, there are organizations across the country that can help you.”

Girls go through puberty at a younger age than when I was a girl (I was an exception. Thanks, Grandma.). That means Hammond encourages girls in 4th or 5th grade to change their gender.

Also, go behind your parents’ backs! 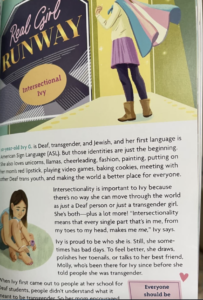 Page 43 introduces you to 10-year-old superhero Intersectional Ivy. She is deaf, transgender, and Jewish. She communicates with sign language.

“Intersectionality is important to Ivy because there’s no way she move through the world as just a Deaf person or just a transgender girl. She’s both-plus a lot more!”

“When Ivy first came out to people at her school for Deaf students, people didn’t understand what it meant to be transgender. So her mom encouraged her to create videos to educate people using ASL. Now people understand better. Ivy’s videos also help people in the transgender community better understand Deaf people.”

It’s weird American Girl left out Jewish when talking about why intersectionality is important to Ivy.

Coincidence? Professor Jacobson has written a lot about intersectionality. In one presentation, he talked about how the left has changed the definition of intersectionality (what a shock!) and now it’s used to drive anti-Semitism and anti-Zionism. 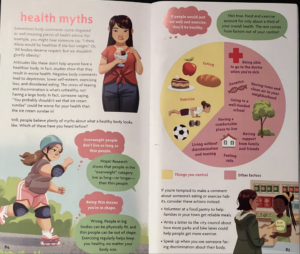 How about health? Page 84 tries to knock out some health myths: “In fact, someone saying, ‘You probably shouldn’t eat that ice cream sundae’ could be worse for your health than the ice cream sundae is!”

Yes, kids shouldn’t tease kids who are overweight or call them fat. It’s rude and awful.

But obesity is a health problem. However, a pie chart on page 85 shows that feelings are more important to your health than a healthy diet and exercise.

In other words, it’s not your fault you’re overweight!

Ought to be a big seller

Can they still call it “American Girl,” or are they assuming someone’s gender?

Back when the Equal Rights Amendment was in play, there was some concern about its wording: “Equality of rights under the law shall not be denied or abridged by the United States or by any State on account of sex.” Many people felt that was a reasonable statement when interpreted in terms of an attribute, but if interpreted as referring to an activity, it opened doors that no one had talked about opening.

“Gender” is a grammar term. It’s been hijacked (like everything else) to subvert normalcy and promote the Left’s agenda.

These are the same people who get their jollies mocking and ridiculing traditional religion. The snobbish mediocre mental cases of this pestilent cult laugh at the doctrine of transubstantiation, and they will claw your eyes out if you deny you can change your sex simply because you “feel” a certain way.

Yeah, but they don’t laugh at Muhammed. They don’t even draw cartoons.

And they do performance art pearl clutching at every Israeli misdeed while pretending like they feel “solidarity” for the poor oppressed Palestinians whose murderous intolerance they give a pass or tacitly admire. I’ve told gay lefty friends, “I think if given the choice of being stranded in either Tel Aviv or Gaza, we know which one you’d pick.”

What’s weird about this? You craft them early on to be the kind of livestock you wanna raise. We’ve been doing this chickens forever.

American Girl stopped being American when they got manufactured in China.

What better way for the ChiComs to contribute to the demise of their principal opponent than to corrupt their children.

“Gender,” as applied to humans vs. language, is just a delusional construct of the leftists. Sex is digital, not analog.

“…who know what they are inside.”

Learning what you are inside takes a long time and it’s not something that just conveniently pops into your head. It’s a lifelong journey.

I’m so old, I remember when the question “What do you want to be when you grow up?” referred to occupation and not identity/self- expression.

Devotees of grooming gonna groom. Indoctrination of children is grooming, maybe not for a paedophile to exploit, but this is absolutely done to condition children. There’s no other reason to introduce these concepts but to normalize them in the minds of children.

You can simulate gender (e.g. sexual orientation, secondary sexual characteristics, perhaps socially-ordered clothing), but you will never change your sex.

Speaking of demos-cracy, whatever happened to the underage handmaiden raped in the haze of immigration reform, who aborted the “burden” of evidence in the privacy of a sanctuary state?

She acted as the vanguard for a recent Veritas exposé about how the Biden Administration sends minors in batches to cartel “sponsors” who aren’t related to them, who then pimp the boys out to work and the girls out to sex-work.

And for a more direct answer, recent news:
https://pjmedia.com/culture/megan-fox/2022/12/07/new-information-in-ohio-child-rape-case-points-to-incompetence-of-child-welfare-and-mandatory-reporters-n1651386

This is truly evil, it’s hard core Leftism to break up families and turning their victims into a mental illness

Do not give your children any books without reading them first!

(The book’s title appears harmless, but its contents are pure evil!)

15 years ago the American girl books were a great resource to give to my daughters.
THey encouraged girls to be active and to do things that were actually heroic.
The Mexican girl in the American Southwest learned from her grandmother how to treat victims of snakebite.
The 1950s girl rescued her grandfather when the canoe overturned in the lake.
I Selfies are so much better than fairytales that taught girls to be passive and wait for Prince charming..
Alas, like every other good thing from my youth, American Girl has been ruined by woke.
Is nothing sacred?

I’m skeptical about the new release of “The Bobbsey Twins And The Secret of Lolita Island”… and if you were thinking of gifting any Hardy Boys novels instead, make sure it’s the original Hardy Boys.

American Girl books
Not I selfies

“When a baby is born, a doctor looks at the baby’s body parts to assign its sex “
Makes it sound like the Sorting Hat from the Harry Potter series:

“Hmm. Difficult. Very difficult. A snake-like appendage. A sack containing jewels. Now where shall I put you? Ahh! The BLUE bassinet!”