The actor notes that the leftists in Hollywood have wrecked his career and livelihood, as well as destroyed his faith in this country. 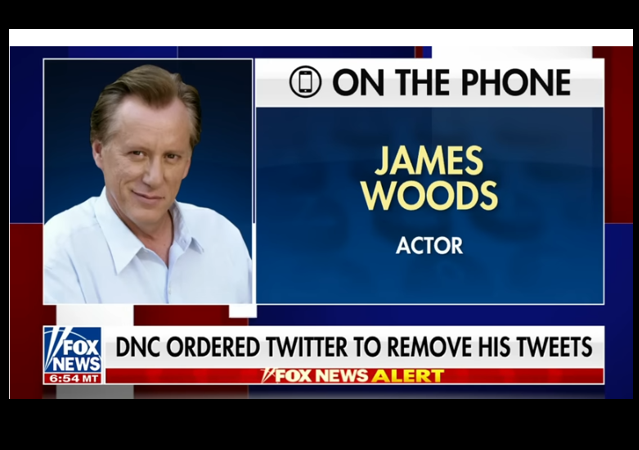 Many of us are following the Twitter thread from journalist and author Matt Taibbi in which he provided details of the way Twitter officials used the social media platform to suppress the New York Post expose on Hunter Biden’s laptop.

That was riveting, indeed. And while that thread was being uncoiled, Fox News Channel’s Tucker Carlson interviewed actor James Woods.

“Celebrities and unknowns alike could be removed or reviewed at the behest of a political party,” Taibbi wrote alongside a screenshot of an email exchange between Twitter employees.

In the screenshot, another Twitter employee replied on Oct. 25, 2020, “I grabbed the first one under SI…defer to Safety on the high profile second one.”

Both Tweets appear to have been deleted and user @stephen_liuhuan’s account is suspended.

Washington Free Beacon investigative reporter Andrew Kerr replied to the Taibbi’s Tweet, writing, “The Stephen_liuhuan tweet was a link to Hunter Biden weighing and using drugs, and another link to a Hunter Biden sex tape. The James Wood tweet is Hunter Biden smoking crack and getting a foot job.”

As noted in the above tweet, Woods has a spectacular body of film and television work, but he has said in the past that he was blacklisted in Hollywood. In this interview, he tells Carlson that the leftists in Hollywood have wrecked his career and livelihood, as well as destroyed his faith in this country. Woods goes on to describe how Hollywood’s producers fish through the social media feeds of acting hopefuls, blacklisting anyone who doesn’t fully embrace leftist dogma.

I will take this moment to direct anyone not familiar with Woods’ movies and television series to the Internet Movie Database, and review his body of work. Then, rent or purchase something from that catalogue. Anything you pick will be better than what Hollywood is currently producing.

And for those of you familiar with his work, please note your favorites in comments. Here is mine . . . Woods as Hades in Disney’s Hercules. Of course, it was produced before Disney deteriorated so dreadfully.

Woods is a good example of the kind of culture that the right needs in the forefront.

And don’t neglect his excellent job performance working at the Kwik-E-Mart,

Woods was like Michael Caine in that he always good even when the movie wasn’t.

“True Believer” is one of my favorites of his and the kind of movie that was a perfect showcase of his acting.

True Believer is underappreciated – a fine parable if the corruption and hypocrisy of the 60’s left, whose resurrection is the source of so many of our current travails.

“Woods goes on to describe how Hollywood’s producers fish through the social media feeds of acting hopefuls, blacklisting anyone who doesn’t fully embrace leftist dogma.”

Were I still in the job market, I’d consider listing my high school on my resume to be James Woods High in Quahog, RI.

For all its leftist writers, Family Guy seems to retain the ability to skewer anybody of any political stripe.

Woods is right. The question remains what will it take to finally persuade dupes?

The ongoing freak out by corporate media and various grifters, like the weirdos associated with the Lincoln Project, is likely to backfire. There’s too much there that can be proven, hell has already been admitted to.

I think Musk has created a new form of TDS in the left, MDS, if you will.

He has driven them crazy(er) and made them reveal themselves for the self serving socialists and repressors of speech that they are.

The fact that they refuse to report it is icing on the cake. The robotic (possibly literally) responses to his actions are predictable and telling.

And if it is true for one media outlet, it is most certainly true for the others. I imagine the leftists at Fakebook, Google and the like are scrubbing their emails as we speak.

I love Woods amd always appreciated his tweets and posts

But he’s wrong, President Trump unveiled the deep state first, but we need everyone that can do anything to co to us the fight to fight, like Musk.

I’m not sure about Musk, he’s in bed with some terrible characters, especially XI, and there is video of Musk in that country drooling at the mouth at the Chinese and XI, so I don’t trust him… and he k ow millions of slaves are working on his stuff in China, so there’s that…

But this tweeter release, it’s a good thing, but it’s just the rip of the ice berg and we all know it, amd so does he.,

Eisenhower warned us about the MIC, a branch of the DS so no, Trump was not first. Many others have warned about the “DS” including Andrew Jackson with his central bank fight, or all the warnings about the FED in 1913. History is rife with warnings about the “DS” and what has happened? It’s gotten bigger and far more sinister. What is Trump going to do about it? Nothing. Musk? LOL he is pushing really nefarious things in the open, like starlink (1.0 and 2.0) and neuralnet implants. I wish people would stop putting these people on plinths and worshiping them like gods, it will not end well for you.

In a world where people are put on pedestals on the basis of credentials and connections, it is quite notable when one actually earns our respect on the basis of performance.

Too many people consider it sufficient to fill their resumes with their CV and positions held – but speak little of what they actually accomplished to better the lot of themselves, their colleagues, and their employer, let alone how they advanced the state of their art.

Elon Musk has demonstrated, again and again, that he is up for the moment in what he takes on.

That is why he is respected by so many. Not worshiped, but respected with eyes wide open, as we respect Trump for acting with respect for our rights when he had the authority to do so … and loathe career politicians who talk a lot while our rights are trampled underfoot by those who Know Better™.

I liked James Woods when he played James Woods on the Family Guy cartoon. Doubt he’ll be back for that role. The first movie I saw him in was the Cat’s Eye back in the 80s. He’s a good actor.

Why is musk using this guy, Matt Taibbi, to
Release his Twitter report , one wants to know.

“As of now, only two things can be true about the rabidly left-wing Taibbi. He is either a misogynist monster or a fabulist who invents stories to sell books and burnish his reputation as a gonzo journalist — a junior-varsity Hunter S. Thompson”.

Were we holding out for Dan Rather?

Remember the film Contact? At the very end of the film the president’s chief of staff says to James Woods’ character something like .. the 18 minutes of static on the recording is … interesting.