“Medical School education is in crisis, with ‘social justice’ and race-focused activism being imposed on students, faculty, and staff.” 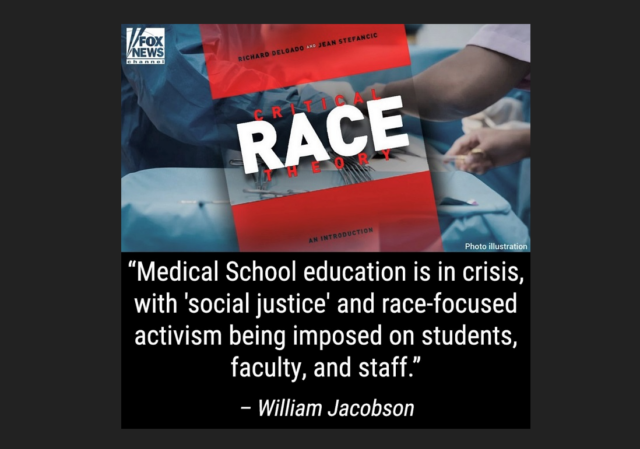 Today we published an expansion of the medical school database, our Top 100 Medical Schools.

“Medical School education is in crisis, with ‘social justice’ and race-focused activism being imposed on students, faculty, and staff.”

Here is an excerpt, head over to the Fox News link and read the whole thing:

CriticalRace.org, which monitors critical race theory (CRT) curricula and training in higher education, has expanded its Medical School Database and found that 58 of the nation’s top 100 medical schools have some form of mandatory student training or coursework related to the polarizing idea that racism is systemic in America’s institutions.

Earlier this year, the group uncovered that 23 of the 25 most prestigious medical colleges and universities have some form of mandatory CRT-related student training or coursework. CriticalRace.org expanded the study and found that 46 of the top 100 medical schools have offered materials by authors Robin DiAngelo or Ibram Kendi, whose books explicitly call for discrimination, according to Jacobson.

“Approaching the doctor-patient relationship through a Critical Race lens is being implemented under the umbrella of ‘Diversity, Equity, and Inclusion’ and other euphemisms, such as Ibram Kendi’s ‘anti-racism’ approach. ‘White privilege’ and similar concepts, pushed by Robin DeAngelo and others, are being infused into the medical school culture,” he said….

“A patient-centric ethos is being drowned out by politics and activism,” Jacobson said, adding that CRT being pushed on medical students is particularly alarming even compared to other areas of higher learning.

“Because there are only just over 150 accredited medical schools in the U.S., and they are so hard to get into, students really have no options. Unlike universities and colleges, where students may be able to avoid a race-obsessed campus climate, with medical schools students have to submit to race-focused medical education or give up their career hopes,” Jacobson said.

“We have analyzed CRT-related training in colleges and universities and elite private K-12. As bad as those institutions have become, things are much worse in medical schools because the stakes are so high. Patient care and people’s lives are at risk when doctors and medical providers view patients as proxies for racial or ethnic groups in sociological and political battles,” he continued. “Every person has the right to be treated equally as an individual, based on his or her medical condition, without societal racial politics influencing treatment. Yet increasingly we see the medical establishment, including the American Medical Association, demanding that medical students and physicians become race-focused activists.”

The subjects of mandatory training and coursework are worded and phrased differently at individual schools, but use terms including “anti-racism,” “cultural competency,” “equity,” “implicit bias,” “DEI – diversity, equity and inclusion” and critical race theory, according to CriticalRace.org.

For example,… University of Missouri-Columbia School of Medicine pushes incoming students to participate in “the Common Read Program to learn more about racial biases in medicine,” according to the study. The University of Illinois College of Medicine has a “Medical School Curriculum” subcommittee which will “plan the summer anti-racism reading/discussion group for incoming students and plan roll out across all phases” and “focus on reviewing the current curriculum content in all phases to remove biases and inaccuracies, identify deficiencies/omission… and to continue to incorporate the social determinants of health into the materials being taught,” the study found.

But these are only a small sample of the plethora of examples found by CriticalRace.org.

The Fox News article got a big reaction, with over 2.5k comments (as of this writing).

We will continue to increase the depth of research on the CriticalRace.org and to expand coverage as warranted.

It’s great to see Professor Jacobson, Legal Insurrection and CriticalRace.org gain such wide exposure yet again. Our country needs this, and it needs a responsive House, too.

My first thought was, why even single out medicine?
My next was, PLEASE don’t single out the one issue where the federal government is salivating to exercise even more control.

CRT is lipstick on a racist pig.

Have they started rejecting Asians, whites and Jews yet? That was the bulk of the class makeup in the courses I taught.

Medical schools can only capture current and future enrollees. What about the remaining hundreds of thousands of physicians who have already graduated and are practicing medicine? Well don’t worry, they’ll be coerced as soon as the state medical boards, the specialty societies, and the board certification industrial complex figures out how to ensnare us.

A LARGE number of present docs are already in the fold. No coercion required and ready , willing and proven able to attack fellow physicians who do not align with the woke. Over 100 physicians in Anchorage petitioned the state medical board to revoke licenses for docs prescribing IVM and HCQ in an outpatient setting…. despite significant success in treating early covid. Add to that the willful lying by the FDA on the human use of IVM… pawning it off as only a horse wormer.

You can forget about the University of Illinois–since the current chancellor took over, it’s all woke all the time

Law schools have already been infected with this Marxist propaganda

Yes, Kevin McCarthy will get right on it. Though in reality, he’s overdosing on Xanax already.

The Xanax thing is what be been saying for years now. I think more people in the US are popping pills everyday that directly or indirectly affect their ability to think clearly. We have normalized psych drugs decades ago with Prozac, Xanax, Ativan, Ritalin (we forget we’ve been pumping kids – who are now adults – full of this crap for decades), etc. we are a nation of sedated/brain-altered people.

I have no high hopes for the RINO Squish leadership doing *anything* substantive in this regard.

This is obnoxiously Maoist, totalitarian and coercive indoctrination in the vile Dumb-o-crats’ utterly corrosive and dishonest racial obsessions and demagoguery. And, it results in predictably corrosive and evil real-world consequences, such as government officials brazenly promoting racist and unconstitutional racial preferences for receiving medical treatment (as was instituted by New York State, after the Wuhan virus onset) and other similar idiocy.

There is no other way to rationally construe this utterly pernicious phenomenon as anything other than an utterly evil, Maoist conceit.

This whole movement guarantees that I get the best medical care possible. I just do whatever it takes to consult only straight, male, white doctors at top hospitals. The fact that they survived this insane running of the woke gauntlet testifies to their utter genius and indispensable skills. After all, there must be some competent doctors to tend to the hypocritical politicos who burden us with the medical dross.

Medical people… please join, actually I don’t think that’s even necessary, just be concerned
It’s your and your families lives at stake

Personally, I don’t go to Drs under 40

I’ll have a bit more “faith” if Big Zir were to once proclaim; “Better if we stay out of this one.”

They don’t even have to explain why out loud; ‘This here is to important, too subtle, and to personally varied for the ham-handed, politicized and shallow action we’re capable of.”

Maybe they can get Trey Gowdy back to act as general counsel for the committee.

If you haven’t seen “The Death of Stalin,” parts of it reflect where medicine is headed in this country. Single payer is another way to say single control.

Yes, what is taught in medical school is of critical importance. I would argue to the House of Representatives that of equal importance is:
1) Whether DEI is used as a factor in medical school admissions (Bakke case) or faculty hiring.
2) Whether DEI has affected the practice of medicine in the Veterans Administration, which is one of the largest health providers in the US.

As a parent of a white cis Hetero ( did I get the verbiage right?) male son applying to medical school it is plain to see he is at a disadvantage just getting admitted