A line from Robocop comes to mind: ‘You have twenty seconds to comply.’ 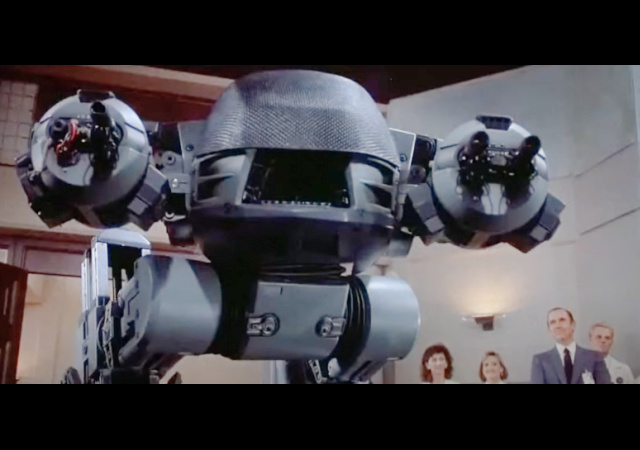 I’ve seen the movie, and it didn’t end well.

The San Francisco Police Department submitted a proposal that would give robots the ability to use deadly force in dangerous situations.https://t.co/PUobApEYiV

Terminator Model Number T-3.5 has now been activated……… Coming soon to a city or Town near YOU! 👀🧐🤔🤨👇🏿👉🏿 SFPD authorized to kill suspects using robots in draft policy – Mission Local https://t.co/aRevyFiOkc

The SFPD is not alone in wanting its very own ED-209. In Oakland, California, the police department discussed whether cops should be able to kill people with shotgun-armed robots. Thankfully, they decided against the absolutely horrible plan.

OPD is not adding armed remote vehicles to the department. OPD did take part in an ad hoc committee discussion with the Police Commission and community members to explore all possible uses for the vehicle.

The shotgun-toting robots prefer to be called “percussion actuated nonelectric disruptors,” and the Oakland Police Department wants some, though is currently offering a compromise measure where they'd only be armed with pepper-spray. https://t.co/MzYKENoAZs

What robot-killing machine movie is better, RoboCop or Terminator? Let us know in the comments!

Don’t see the big deal here, these aren’t fully autonomous robots, these robots are controlled by a human somewhere. These human controllers would be under the same scrutiny as if they were deployed in person. Just because they authorize a robot the ability to use lethal force, that same human operator would still be liable for any illegal actions taken by the robot.

With blammy robots, will there be enough work remaining for those 87,000 new IRS guys willing to shoot? (It was in the damn text of the bill; and in the recruitment ad.) Gotta get them enough practice to keep them sharp.

Depends are scattered all over the White House.

Definitionally, guns are tools not robots.

Even drones are not robots, despite what breathless press sometimes say. The crux of the distinction is how much autonomous action the device has. A self-driving car is a robot. A fly-by-wire airplane is not.

An aircraft may become a “robot” depending on how much it makes vs. implements flight choices. As an example the Boeing 737-800s of recent, lamented memory sit right on the cusp of the distinction. Their “flight safety system” usurped commands from the pilots to the aircraft — effectively making decisions, being robots. One perspective on that flurry of crashes was two entities trying to control the aircraft: the pilot and the “safety system.”

Technically, if it’s under full (remote) control by a person, it’s a drone, not a robot.

I’d understand wanting shotgun drones for breeching purposes. Better that the first one in be made of metal instead of flesh and bone.

Actual robots with guns would sound like a great idea, right up to the point that first poor kid gets blown in half by buckshot when his exuberant play is misinterpreted as “advancing in a threatening manner”.

I don’t know if it’s good or bad yet. I liked how the Dallas PD used a remote vehicle to blow up a shooter that killed multiple police officers. depends on who the use deadly force against.

IOW, what matters is the person behind the robot, not so much the robot.

Robots are tethered via hardwired e-stop circuitry to provide a failsafe deactivation in the event of human entrapment.

The 1st Law of Robotics according to Asimov: “A robot may not injure a human being or, through inaction, allow a human being to come to harm.”

As others pointed out, these are more akin to drones controlled by human handlers, not autonomous robots. Still, if LEO in the field can mistake a firearm for a taser, or the entire malignant gas light system attempt to frame a good cop for murder of a violent Ferguson teen, and the FIB is the personal STASI of the democrat party, it isn’t much of stretch to say, “Oops. Rogue robot. Our condolences. Move along, Nothing to see.”

Yup. This has BAD IDEA written in big letters from coast to coast.

I am trying to think of any positive example from our body of speculative /science fiction that would support this. Not coming up with any. That body of work might be fiction but collectively it represents a good deal of thought by a large number of bright people.

When we remove human beings from the immediate consequences and substitute even a drone we risk desensitized violence. In wartime on a battlefield that might be acceptable. IMO, this is a bad idea for domestic law enforcement.

We get exactly the effect you name when we use humans as actuators, implementing directives from elsewhere.

The example form Science Fiction that came to my mind is toward the beginning of Farenheight 451. The “robots” were fleshy, not machines, but doing as directed without any sort of guard rails.

The perfected this technique with the “rogue censorship algorithm.” Now comes the real lead.

Well, this is just further along the path from “Peace Officers” to “Law Enforcement.”

Any more, even calling them “Peace Officers” again wouldn’t help: they’d be all about inflicting “peace” for the overlords’ sake, not keeping peace for us proles.

As long as they’ re not programmed with the principles of the Pro-Choice ethical religion, then this may be a viable Choice… choice.

So equipping these robots with gaydar is not likely to be an option?

In SF? They’re probably going to require a gaydar notch filter if you expect the electronics to operate at all.

This is a slippery slope we don’t want to dance on.

Yes, what they’re talking about today are ‘drones’ not fully autonomous ‘robots’

But this would set a precedent taking us one step closer towards a very creepy future.

I think that is misstating their (current) proposal. That implies that the robot is making the decision, why so far at least, isn’t true as it’s a drone. A human being still controls it and pulls the trigger. It’s a weapon system which reduces cops exposure to return fire.

I don’t like the fact that they are trying to sensitize us to robocops, so lets not help it along.

Pro tip – use the preview feature so you don’t sound more idiotic than you should… or add maybe petition the boss for an ‘edit’ feature. 😉

Get rid of police, then have drones replace police because it’s too dangerous for live bodies.
It won’t end well

Looks like my (possibly overlong) cut-and-paste from Randy Weaver’s testimony about his own personal encounter with an FBI shotgun robot (30 years ago nearly to the month) got snipped, so y’all can find it here. Search for the string “After Vicki was shot and Kevin was shot” to read how the nice men with the shotgun robot took care of business with the Weaver family.

The problem there wasn’t the robot, but the police employing it.

They could be programed to go after woke,
Give the programming contract to Elon….

YOU CALL THIS A GLITCH?! Your ‘temporary setback’ could cause us fifteen million dollars in interest payments alone!

Think of Gort on a bad day. Remember 0bama was quite comfortable with drones doing the killing/murdering as it was the drone doing the deed. Oops…pushed the wrong button…or got the wrong target.

Except it never was the drone doing the killing. There was a controller who fired the missile.
IN EVERY CASE.

So, another post about this that actually doesn’t address the question that the headline puts in everyone’s mind:
Are we talking autonomous machines that have the authority to shoot you?
Or, just a remote weapon the police can directly employ against a bad guy behind cover?

This is a serious distinction. The first is obviously problematic, and would be reason to employ all the RoboCop and Terminator references. The second … well, it’s exactly what the Dallas cops did to that sniper taking out cops a couple of years back. They ran in a robot with a small explosive, iirc, and BOOM! I really don’t see the problem with it – just another tool for getting to a bad guy.

But enjoy all the pop culture references, y’all!