Palestinian terrorists demanded release of convicted terrorists in exchange for the body of the 17-year-old. The IDF vowed to launch “a large-scale operation in the West Bank” to retrieve the body. 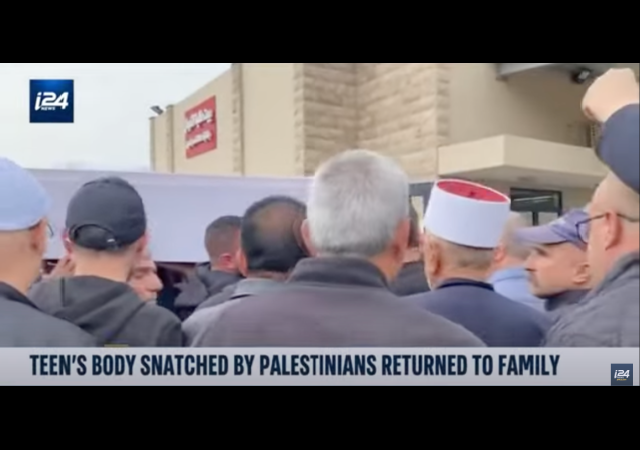 The boy, who was an Israeli national belonging to the Druze minority, “was still alive” when Palestinian gunmen stormed the medical facility and took away his body, The Jerusalem Post reported Wednesday. “He was in critical but stable condition and removing him from the ventilator is what killed him, the father and uncle Hady Ferro claim,” the newspaper wrote, quoting his family members.

After he was critically injured in a car accident, he was taken to a hospital in Jenin. When Palestinian terrorists discovered that he was Israeli, they disconnected him from a respirator. pic.twitter.com/XDLTfTDj4J

Finally, on Thursday, the Palestinian captors were forced to relinquish the body. “Tiran Fero was laid to rest in his hometown in northern Israel on Thursday after Palestinian gunmen returned his body following the kidnapping on Tuesday,” the i24News reported. “The funeral was held later that day in the town of Daliat al-Carmel, a Druze community located on Mount Carmel southwest of Haifa.”

“Anger over the snatching among Druze Israelis intensified Wednesday night, with thousands attending a protest march and blocking off a major highway near Daliyat al-Karmel,” The Times of Israel added. “More than one member of the community cited by the Walla news site said that if Fero’s body was not returned soon, they may attempt to enter Jenin and retrieve him themselves.”

The streets are flooded in the Israeli Druze town of Dalit El Carmel.

Residents are marching to protest the kidnapping of 18-year-old Tiran Pero by Palestinian gunmen.

The family is holding the Palestinian Authority responsible for returning his body.pic.twitter.com/NtJZeMne7V

The Israel Defense Forces (IDF) also reportedly vowed to launch a military operation to retrieve the boy’s body. “In the background of the diplomacy was a warning from Israel and the IDF that if the body was not returned, Israel would launch a large-scale operation in the West Bank,” The Times of Israel reported Friday, citing an Israeli media report.

The Jerusalem Post reported the end of the standoff:

Tiran Fero, the Druze teen who was kidnapped by Palestinian terrorists in Jenin on Tuesday, was laid to rest in his hometown of Daliat al-Carmel, on Thursday afternoon.

The 18-year-old’s funeral was held in the northern Israeli town on Thursday after his body was returned to his family, following 30 hours of negotiations between Israel’s defense establishment and the Palestinian Authority. (…)

The negotiations to return the body of the 18-year-old Druze-Israeli came after close to 30 hours of intense talks between Israel’s defense establishment and the Palestinian Authority. His body was transferred at 4 a.m. to his famil in Israel through the Salam Crossing.

The Druze's ultimatum: if the body of Tiran will not be return by tomorrow morning. They will go to Jenin by themselves pic.twitter.com/yqYEWFdkoN

Unsurprisingly, the heinous incident transpired in the Palestinian city of Jenin. The city, governed by the PLO-controlled Palestinian Authority, has emerged as a stronghold for the Iran-backed Palestinian Islamic Jihad (PIJ) terrorist group. PIJ operatives based in Jenin have conducted several deadly terrorist attacks inside Israel in recent months.

Druze: At the Forefront of Defending Israel

With a population of about 140,000, Druze make up less than two percent of Israel’s population. Members of this small minority have distinguished themselves in the Jewish State’s military, social and cultural life.

🔴 #BREAKING: Israel secures release of Druze Israeli boy Tiram Fero, whose body was detached from life support by Palestinians from a hospital in the WB and taken hostage in Jenin. He is being returned home for burial in Israel, on what would have been his 18th birthday. pic.twitter.com/mSy3FKb5Tj

Unlike other non-Jewish minorities in Israel, Druze, who are of non-Muslim Arab ethnicity, have taken it upon themselves to do mandatory service in the IDF.

The official IDF website states, “[e]ighty percent of the Druze population in Israel drafts into the IDF and among the Druze soldiers who are currently serving, thirty nine percent are in combat roles.”

This is apparently higher than Jewish men’s participation rate in Israel. “Among Israeli Jews, 75% of men and 57% of women currently serve in the military or have served in the past,” according to Pew Research Center in 2016.

The world would be a Better place without Muslim

The world would be a Better Place™ if the Israeli government finally had enough of the arab terrorists and moved in and cleaned the whole nest of terrorists out and took back the territory they ill-advisedly handed over to these same arab terrorists. (And no, I don’t want to hear from Milhouse how the Israeli government can’t do that. They can. They’ve tried for decades to negotiate peaceful co-existence with the arabs. They don’t want it. They can suffer the consequence as a result.)

All of these headlines, including the LI headline, seem misleading. They didn’t steal a “body”, they kidnapped a living kid who subsequently died and then they tried to hold his body hostage.

They killed the kid.

It sounds like the order of events was that they killed the kid disconnecting the ventillator, then absconded with the body.

But still, the murderers should be hunted down, and the headlines should reflect that he would be alive but for their actions.

The Palestinian Authority is remarkably consistent: it turns out they are all for any “decency” that prevents them from getting killed themselves.

In this they are consistent with their predecessors, colleagues, and sponsors, now and of long standing.

Somehow, I suspect that “negotiation” was mostly about: “You can hand over the body, or we can come get him.”

…and while doing that we will create a lot of bodies in retaliation.

“Kidnapped his body”? Where did that shit come from?

They think they’re so brave! I dare them to come over here and steal that body out of the White House. Oh my! The Democrats would be so upset! They plan on using that body for four more years.

Doubtless there would be a vicious hit piece in the New Atlantic Post. What would the armed nihilists do about such criticism?