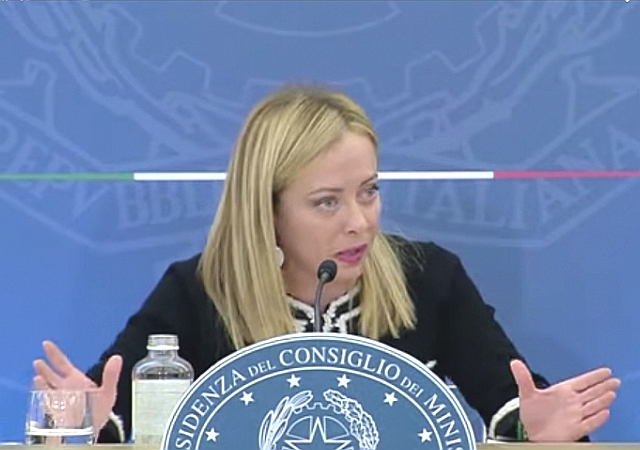 “The changes announced Tuesday would knock eligible workers out of the system after eight months or after they refuse a job offer, and requires recipients to actually live in Italy,” The Associated Press reported.

Europe’s Welfare benefits are one of the main reasons behind surging illegal migration. The migrants are often poorly-educated and unemployable young men from the Middle East and North Africa.

“Meloni presented the government’s first economic policy initiatives Tuesday, announcing 21 billion euros in budget tweaks that would be used to help industry and families cope with soaring energy prices, as well as measures to incentivize couples to have more children and businesses to hire more women,” The AP News added.

Meloni, who was much maligned by the mainstream media as “far-right” and outright “fascist,” appears to have allocated the country’s financial resources based on common sense policies.

Giorgia Meloni, Italy’s new prime minister, is to clamp down on a poverty relief scheme called the citizens’ income, arguing that it encourages idleness and has been widely abused, including by convicted mafia criminals.

The initiative was introduced in 2019 by the Five Star Movement, a populist party that was part of a previous government but is now in opposition.

More than 3.5 million Italians receive the €780 a month payment, with more than 2.3 million living in the struggling south of the country, including Sicily and Sardinia.

Announcing her first budget, Ms Meloni said she would pare back the scheme, saying that it had reduced incentives for people to find jobs and that those able to work should no longer be eligible for the handout.

They will be granted the welfare payment for a maximum of eight months next year, after which the whole system will be overhauled, starting in Jan 2024.

“We’re keeping our pledges with respect to the citizens’ wage, which is a bad measure,” said Ms Meloni.

Since the scheme started, there have been numerous cases of the minimum wage being claimed by people who have no right to it.

In August, police in one part of Sicily arrested more than 100 people, including several with convictions for mafia-associated crimes, for fraudulently claiming the citizens’ income to the tune of €1.5 million.

Earlier this month the finance police announced that while carrying out routine checks of yacht owners, they had found several who had been claiming the citizens’ wage, despite being wealthy.

The Guardia di Finanza carried out the checks on boats cruising along the coast between Rome and Naples and discovered 13 individuals who had fraudulently pocketed the handout, including a company director.

Meloni is not only fixing the country’s welfare system, but she is also restoring sensible immigration and border regulations.

Her government has pledged to close the country’s ports to illegal migrant boats coming from north Africa. “Italy’s new right-wing government has vowed to stop the tens of thousands of migrants arriving on Italian shores each year,” the German state TV channel Deutsche Welle complained earlier this month.

The UN Refugee Agency (UNHCR) issued a statement appealing for all those onboard the blocked vessels to be allowed to disembark. “Those stranded need to be disembarked swiftly without any further delay. We call on states in the region to protect the lives of those rescued by ending the current impasse and offering a place of safety for disembarkation,” the UNHCR said.

The European Commission highlighted the need to ensure international laws were being observed.

“In line with international norms, every effort should be made to ensure that the time is minimized for the people remaining on board of these ships … we encourage all relevant authorities to cooperate with each other in providing a suitable place of safety for the people on board in order to ensure the disembarkation.”

Musk-Meloni, ’24!
Citizenship? You can’t be serious!
I have a laser printer, and I know how to use it!

Kurt Vonnegut Jr. wrote, “a sane person to an insane society must appear insane” in Welcome to the Monkey House.

“A time is coming when men will go mad, and when they see someone who is not mad, they will attack him saying, ‘You are mad, you are not like us’.”

“Since the scheme started, there have been numerous cases of the minimum wage being claimed by people who have no right to it.”

It’s a worldwide phenomenon. Create an opportunity to commit fraud and by George, some people will commit fraud.

Based on the fraud in the US, you’d think that the number of small businesses had doubled based on all the claims for payroll protection. The key part of a crisis is that everything has to be done faster than it’s legitimacy can be checked.

You mean like Trump, DeSantis, MTG and Kari Lake?

Exactly… but but orange man and his posse bad

However, DeSantis is not part of the posse, despite his doing some very good things, it’s all part of the plan to
Make the sale to MAGA people. His 280,000,000 million from Griffin and co, his endorsements from non other than the Paul Ryan gang…

DeSantis is a fake MAGA and that will be shown even to those who do not believe it now….if they follow the money and see who he has surrounded himself with

An endorsement from the likes of Paul Ryan (when you look up “RINO” in the dictionary, his picture is there) should be a disqualifying kiss of death.

Even the Bible says those who will not work shall not eat. (2 Thessalonians 3:10). Nice to know Italy will soon be up to speed.

Couldn’t these folks disembark in Algeria, Morocco, Libya, Egypt, Tunisia, Jordan or Syria? Oh I get it, those Nations aren’t EU members, don’t have a bloated social welfare budget, do not really care about complaints re human rights nor worry over much what the world thinks about them.

Italy seems to have selected a leader who refuses to be held hostage to her western ideals by those who seek to undermine the society which created and the institutions that maintain those same ideals.

She reminds me of the Money Honey. Is she the new Ballsy Honey?

It seems that only the western countries have a “duty” to take in people that put themselves in harm’s way by launching ships into the Mediterranean, knowing they will be picked up.

Since the France 24 story mentioned Libya, should it not be also noted that it was Hillary that blew up a relatively harmless Khaddafi, uttering “we came, we saw, he died?” Libya was relatively stable before that, was it not?

Isn’t this EU mandated “duty” essentially an unfunded mandate to the member countries? Does the EU compensate them for food, housing and dealing with the inevitable crime wave? Is there a maximum number of “migrants” that can be accommodated, or do they just keep dumping them in the countries until something breaks, e.g. the election of Meloni?

I see far too many analogies to our southern border and the leftists that are supporting its porosity.

Given the stance of the Vatican perhaps sending them there, along with a ring fence to make sure they remain, is appropriate.

Curious how the EU had nothing to say until Yet Another Boat Full of Migrants had to dock and disembark. in La Belle France.

Macron particularly beclowned himself, which is remarkable given the competition from his prior foolishness, and the likes of Canada’s Brille Creame El Duche.

The boat held several dozen, vs the tens of thousands received into Italy already this year. I suppose it’s easy to be charitable with someone else’s stuff.

Rev 2 /meta: Sometimes an obvious upgrade is obvious. So: “Just like last night, only better.”

Curious how the EU was silent until Yet Another Boat of Migrants disembarked in La Belle France. I wonder what would happen if they off-loaded in Germany?

Macron hit peal beclowing on this one, which is remarkable given the level of his prior shenanigans, and competition from the likes of Canada’s Brille Creame El Duche.

The boat of outrage-y outrage held several dozen vs. the tens of thousands debarked in Italy already this year. I suppose it’s easy to be charitable with someone else’s homeland. Who are they to think it’s theirs anyway?

I’d guess she and Kari Lake would make a terrific team. Both are much tougher than the republican men.
And to even the playing field, the LI team should always refer to the press as the left radical stenographers for legacy media. You just can’t let them keep defining the right and not fight back so they have to waste time defending themselves.

“In line with international norms, every effort should be made to ensure that the time is minimized for the people remaining on board of these ships…:

I agree. With all haste, turn the ships around and get them back to where they came from. Our open southern border the same thing. Feed them and find out where they come from then send them back

Exactly!! None of this “touch the soil and you gain all of our Constitutional right” crap. They exploit the refugee laws by skipping through acceptable countries of refuge and head directly to the U.S., where they are welcomed (but not vetted) by leftist arms.

Send them back to Guatemala or wherever with a gun and ammo. Let the chips fall where they may.

And don’t say this is an innocent “migration;” how do they “walk” over 2000 miles with no supplies etc. to get to the U.S. border??

“Feed them” can be defined as handing them on MRE each.

I ate them for years and I’m still kicking. BTW, when you find out what country they came from bill the country for the amount it takes to feed and transport them.

“In the Carboniferous Epoch we were promised abundance for all,
By robbing selected Peter to pay for collective Paul;
But though we had plenty of money, there was nothing our money could buy,
And the Gods of the Copybook Headings said: ‘If you don’t work you die.'”