At the border, the Air Marshals have been tasked with “Hospital Watch, Transportation, Law Enforcement Searches, Welfare Checks, and Entry Control.” 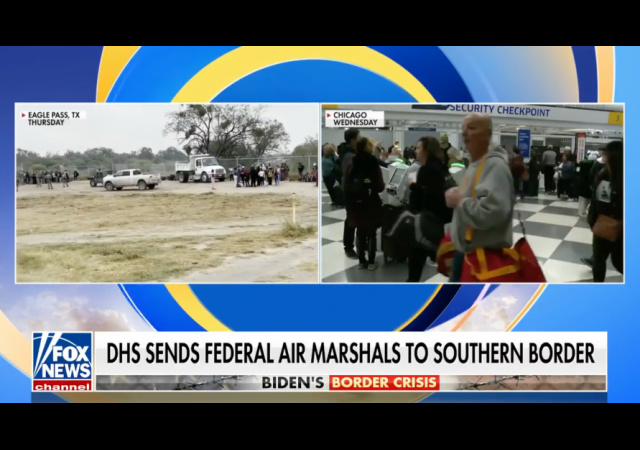 Sonia Labosco, the executive director of the Air Marshal National council, warned President Joe Biden’s administration that air travel is “becoming less safe” since he is sending them to the border.

Labosco wants Biden to stop sending Air Marshals to the border, especially since air travel will become busier due to the holidays.

“We have been decimated. We have been depleted. We’re on less than 1% of flights. These ground-based duties that they’re pulling us out of the sky to go to the border are just demolishing our chances at stopping another 9/11.”

Labosco said Americans will suffer because many believe they’re safe in the presence of a trained air marshal, but “they’re just simply not.”

Labosco said marshals feel “torn” about being at the southern border while not doing the job they were trained to do.

“They have a humanitarian heart. We empathize with what’s happening at the border as human beings. However, it does not take away the responsibility or the oath that we have as air marshals to protect our aviation domain.”

Labosco said the council hadn’t heard back from Biden. The board sent Biden another letter this weekend because marshals encountered Level Four and Level Three incidents.

“Level four means that they tried to breach the cockpit,” explained Labosco. “Level three, we had two of those, which means there were life-threatening behaviors on one of those aircraft. An individual had a straight razor to a passenger’s throat. So these are very serious incidents.”

“As part of a DHS wide effort, (LE/FAMS) has been called upon to redeploy Federal Air Marshals (FAMs) to the Southwest Border,” Tirrell Stevenson, Executive Assistant Administrator and Director of the Transportation Security Administration’s Law Enforcement/Federal Air Marshal Service wrote to Air Marshals in a November 14 email shared with the Herald.

According to Stevenson’s email, it may be “operationally necessary” to assign deployments to Air Marshals from “all field offices and Headquarters assignments” despite a history of some Marshals voluntarily assisting Border Patrol agents.

“A transparent, equitable and consistent selection process and deployment plan has been developed and agreed to by all LE/FAMS Supervisory Air Marshals in Charge,” Stevenson wrote.

David Londo, the council’s president, told The Boston Herald that he filed a complaint because sending Air Marshals to the border “is both a waste of their ‘highly specialized’ training and a violation of the law.” More from The Boston Herald:

Pekoske and Stevenson are sending Marshals to El Paso, Laredo, and McAllen, Texas, as well as San Diego, California and Yuma, Arizona, according to Londo. While there, he told the Inspector General, Marshals are performing “Hospital Watch, Transportation, Law Enforcement Searches, Welfare Checks, and Entry Control.”

“The agency documents never describe or mention that these duties have any relation to TSA’s core mission of transportation security. Instead, the duties relate to assisting migrants who have crossed the border into the United States,” he wrote.

The border is out of control. Migrant encounters grow each month, consistently setting new records. Migrants are abandoning dogs at the border.

The solution to the problem is simple: Put the air marshals on the same plane as the illegals and fly them across the border.

Good idea for 87,000 IRS agents, their useless to the country, oh wait, their robbing the country for the government.
Hoods Robbers

“Sonia Labosco, the executive director of the Air Marshal National council, warned President Joe Biden’s administration that air travel is “becoming less safe” since he is sending them to the border.”

John Lott reports that “although one-quarter of the flights out of Reagan National have air marshals, the level is close to 1% for Baltimore-Washington and Dulles International Airports flights and essentially zero over most of the rest of the country. Only a small fraction of flights to Europe are being covered and then only one day a week.” Reagan National serves the bulk of federal poohbahs, with Baltimore and Dulles handling the overflow. The much-vaunted air marshal program isn’t to keep US safe — it’s another personal security force for our arrogant federal masters.

“Labosco said Americans will suffer because many believe they’re safe in the presence of a trained air marshal, but “they’re just simply not.”

You’ve been lying to them all this time anyway. It’s just that you can’t hide it anymore now.

“Council?” Bunch of people gathered to make airy pronouncements and wring their hands about how things should be(tm)?

“Concsiousness raising” only works when it’s a solvable problem, with people already inclined to solve it. Otherwise you have to figure out some new stuff, convince people, or both. Way harder, and not nearly as much fun.

Chaos on purpose.
And not enough care.

They have a humanitarian heart.
Then they’re in the wrong job.

Level four means that they tried to breach the cockpit
Level three, we had two of those, which means there were life-threatening behaviors on one of those aircraft.
And you give an example of exactly ONE of the lesser level. Why no transparency on the other incidents you claim? What were they? Why haven’t they been in the press? Does this mean TSA isn’t doing its job properly?

sending Air Marshals to the border “is both a waste of their ‘highly specialized’ training and a violation of the law.”
Now this part is serious. They’re just sending down agents with special training to actually shoot people inside an airplane to … do paperwork on illegals? That doesn’t even stop them from entering the country? Yeah, definitely a waste of our tax dollars.

As to the razor incident: Remember when we said “Yeah, no one will ever be able to take over a plane with a box-cutter, again!”? Where were those people when this guy pulled out a razor?

TSA is “security theatre.” No more, no less. They took the existing monkeys who worked for the individual airlines and who failed to stop the 9-11 hijackers, and rewarded them with federal badges, uniforms, and pensions. Mission accomplished!

As for the cockpit rusher, my money’s on a common, drunk, self-important asshat. (Beto?)

I always tell people that years ago I was getting on a plane and had a bottle of water in my bag that they made me throw away despite me being willing to drink part of it in front of them.

When I got on the plane I realized that I had my Leatherman with a 4 inch blade in my carryon bag that they let pass through. But thank GOD they took my bottle of water!

All of their procedures are a complete and utter joke. They are staffed with the absolute dregs of society that are unemployable anywhere else and are INCAPABLE of independent thought, they can do nothing but slavishly follow their procedures and orders no matter now nonsensical they may be.

Everybody who pays even the slightest attention knows that the TSA routinely fails 90%+ of security inspections by the feds when they bother to do them, but the government doesn’t care because they know its all just for show anyway.

I’ve flown to NYC, twice, inadvertently carrying a canister of pepper gel in my backpack. TSA didn’t notice it, either time.

Bruce Schneier I think coined that term “security theater”, at least in general use around TSA shenanigans.

He’s pretty much required reading around security, especially information security and electronic / digital stuff. He has a gift for making the esoteric ins and outs understandable, including their relevance.

Every time you listen to this guy, you’re way smarter about what’s going on, what can be done, and what can’t. They don’t have him testify much; don’t put him on a lot of commissions and committees. I wonder why?

“Where were those people when this guy pulled out a razor?”

At the border lol

So the air marshals no longer get paid to sit on a plane all day in the off chance that something MIGHT happen?

TSA is a joke, and I seriously doubt the air marshals are much better. Even in their statement they can barely come up with a single example of an incident they prevented.

The fact that they sent them down to the border tells me that the left knows the air marshals are worthless where they are, and it gives them a fig leaf of ‘doing something’ about the border with minimal risk.

I don’t know about this. I’ve never heard of air marshalls preventing a single hijacking or terrorist event. The idea of putting them on airplanes started in the 70s while I was still in the Air Force. Several people I knew were detached to fly as air marshalls. My late son-in-law was a Border Patrol agent who switched to air marshalls. They’re probably doing more good on the border than riding around on airplanes.