“For the first time in decades, a Republican has a good chance to win a congressional seat in Rhode Island” 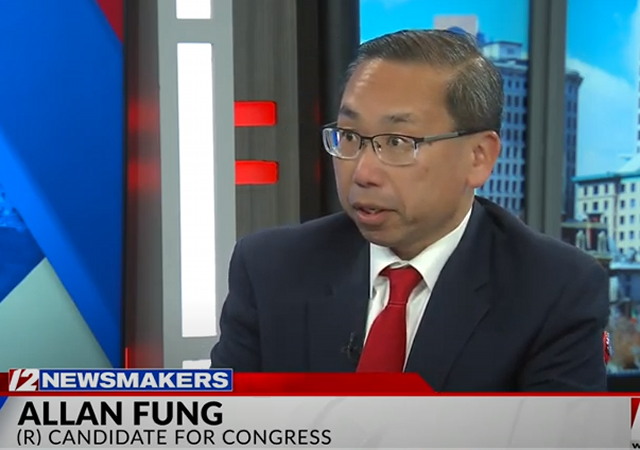 Republican Allan Fung is leading Democrat Seth Magaziner in the race for the 2nd Congressional District in Rhode Island, according to a new poll.

This is pretty big news. For anyone not familiar with New England politics, Rhode Island is very blue.

Republicans remain positioned to win a congressional race in Rhode Island this fall for the first time since 1992, but Democrats still have a shot at holding the seat, an exclusive 12 News/Roger Williams University poll released Thursday shows.

The survey of 254 likely voters in Rhode Island’s 2nd Congressional District finds Republican Allan Fung at 46% and Democrat Seth Magaziner at 40%, with 9% of voters undecided and 4% supporting independent candidate Bill Gilbert, who will appear on the ballot as “Moderate.”

The poll shows Fung’s lead is built in part on his outsized strength with Democrats, 24% of whom are backing him. “If he can hold onto that he’s going to be in a decent position, because normally Republicans don’t get a quarter of the Democratic vote,” Fleming said.

Professor Jacobson was quoted by the Washington Examiner in an article about this race:

“In difficult economic times when people are worried about inflation and taxes, I don’t expect the abortion issue to be decisive, since Rhode Island already has liberal state abortion laws,” William Jacobson, a Cornell professor and conservative blogger from Rhode Island who helms Legal Insurrection, told the Washington Examiner.

“For the first time in decades, a Republican has a good chance to win a congressional seat in Rhode Island,” Jacobson added. “Magaziner, by contrast, is living off of the name recognition of his father, who was a powerful Clinton-aligned Democrat. He doesn’t have any real base.”

This is a fun ad from the Fung campaign.

🚨New On TV🚨 Our superhero in khakis talks about his energy plan at the iconic Twin Oaks! #FungForCongress 🇺🇸 pic.twitter.com/qjoBaagHdW

If a Republican is competitive in Rhode Island, we may see a red wave.

Fung isn’t a great choice, but he’s the only choice.

That’s the way to govern, moderate conservatives in increasingly blue districts, and keep them hard conservative in deep red districts.

Liz Cheney and Mitt Romney are an example of us not adhering to that practice.

The big tent works, just need to be smart about it.

Absolutely right. Collins is probably the best we can do in Maine. But not Murkowski and Mittens in AK and UT.

Democrats are allowed to go off the reservation so long as the Party doesn’t need the votes. If the vote is needed, they vote the Party line. And, they never challenge the leadership. Recall, when Bill Clinton was impeached the Democrats in the House and the Senate showed up at the White House to support him. Every last one of them.

I don’t care what a CongressCritter votes for on stuff that doesn’t matter. On stuff that does, then I care, because it matters. Romney and Cheney should be fed into industrial strength shredders along with about a dozen other “Republican” House members and Senators.

It’s not about which way he goes on specific votes. It’s all about which party controls Congress, and to do get control of Congress, republicans need to win some seats in purple and blue districts. True conservatives can’t do that, but “moderate” Republicans can.

Everything inside me sez NO but if not there might be some salvation for the wretched “Ocean State!”

If the left was really leading why are they always on the ropes?

The d/prog are going to lose some seats in places they probably could have won but for some bad votes demanded by Pelosi and Schumer. They won’t admit it’s due to bad policy choices because that indicates bad leaders. So they blame d/prog donors.

Ain’t just right versus left, red vs blue. Its sense vs nonsense.

Why do Republicans voluntarily reside in RI?? Sounds like a bizarre type of self-inflicted harm.