“We got him on tape saying the same things they’re saying in public. WE GOT HIM” 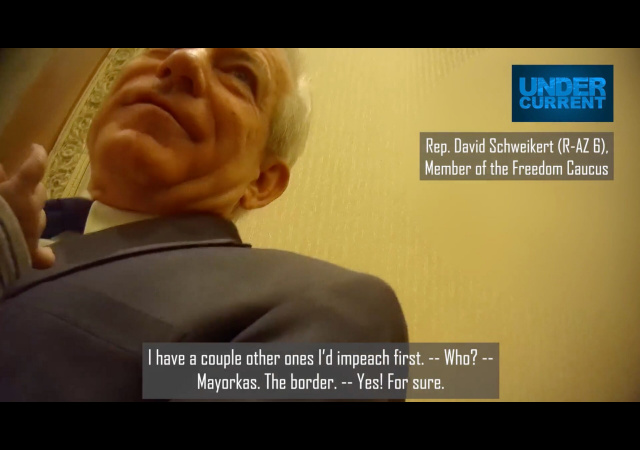 An undercover video meant to harm an Arizona US House candidate has turned into a campaign ad in a weird turn of events.

It started when Scott Dworkin from The Democratic Coalition tweeted a video of GOP Rep. Dave Schweikert “talking about breaking up the FBI and impeaching members of the Biden Administration if GOP wins House.” He also pushed to make the video go viral.

GOP Rep. Dave Schweikert was caught on undercover video talking about breaking up the FBI and impeaching members of the Biden Administration if GOP wins House. Let’s make this viral.
pic.twitter.com/xLHtZtEW3J

The internet is working on that request, but things aren’t going as expected for Dworkin. Unfortunately for Dworkin, the comment thread is filled with “where do I donate” Tweets.

Thanks for the tip! Contributions taken here ! https://t.co/nHEskTUVJ1

The complete disconnect between Democrats, who think this makes Schweikert look bad, and Republicans, who are ready to toss him a donation, is incredible. Most on the right don’t see much wrong  with Rep.  Schweikert talking about impeaching Secretary Mayorkas and FBI Director Christopher Wray.

The comments are gold; we had to share some of these for your entertainment.

And all while holding a sweet little baby. Love this guy!

“We got him on tape saying the same things they’re saying in public. WE GOT HIM”

They mock what we believe in, and then they do not understand why we still support our beliefs.

Which is why we must defeat them like no other, so badly they never are able to reform, or else, we must have a breaking up because this dog will no longer hunt

I’m tired of being grief stricken everyday, worried about my family, especially the children and grandchildren to the degree I am.

Take a few days off why don’t ya? Well I do and then I come back and it’s 3x as bad
Mtheses people are insane, they want to destroy this country, cut the breast off our children and pump them up with chemicals

They are making monsters out of their own flesh and blood.

You can not reason with this evil and they are EVERYWHERE!!!

Democrats just have no fucking idea how normal people think! They just haven’t got a clue 😂😂

Memo to Scott Dworkin: This is ARIZONA out here, you dipshit.

I hold to the principle that you gotta remember to reward ’em for good behavior — the carrot is important. So I just sent him some carrots.

Just remember whatever we win in the senate the chance of a filibuster proof (let alone veto proof) majority is nil but this does seems to show that man believes what he says so when 2024 comes around he will be more than worth having in congress.

The left can’t meme or sting.

Hilarious that the left think that’s a gotcha. If anything this representative is going to win by a bigger margin now.

That’s a wonderful interview — for him. He’s so honest and intelligent too. Can they run him for Senate?

Those actually sound like really good ideas. Disbanding the Gestapo is definitely a good plan as is impeaching the bald communist in charge of DHS.

Making the video go viral is a good idea.

The complete lack of recognition on the part of dems in AZ is really, really funny. Nothing is guaranteed any more, of course, but Schweiker looks like a pretty good bet to return to DC.