One man described Friend as “a model example of what FBI agents nationwide should be.” 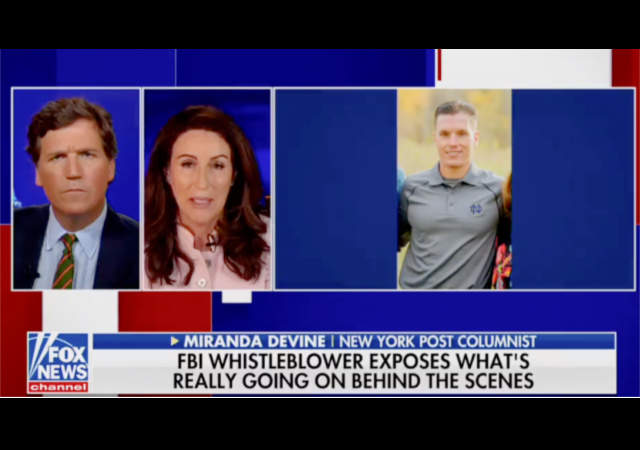 “It’s time to stop the FBI from being the enforcer of a political party’s ideology,” says Ernie Tibaldi, a retired agent from San Francisco. “We need to re-establish the FBI as the apolitical and independent law enforcement entity that it always was.”

He expressed gratitude to Friend “for having the courage to stand up to the corruption that has taken over the leadership of the FBI.”

Many former agents hailed Friend, a SWAT team member in Florida, as a “hero” after he was punished for refusing to participate in what he regarded as unnecessarily heavy-handed SWAT raids over Jan. 6 misdemeanors.

Terry Turchie, a former deputy assistant director of the FBI’s Counterterrorism Division, said he didn’t use SWAT when the FBI arrested Ted Kaczynski, known as the Unabomber. He killed three people and 23 others.

Turchie came to Friend’s defense, describing him as “a model example of what FBI agents nationwide should be”:

“Moral courage, leadership in the face of pressure, and true to the Oath of Office FBI agents take to defend the United States Constitution and protect America and its citizens.

“I am beyond proud to offer him my support in the decisions he had to make.”

“No real FBI agent would defend the position of using SWAT teams to arrest non-violent senior citizens and others with political opinions not currently tolerated by this administration, compounded by the idea that many of these cases involve misdemeanor criminal charges.

“This activity actually generates tension in communities and increases the potential for tragic results and injuries to FBI agents and citizens.”

Turchie even said: “The FBI has been collapsed into nothing more than a police agency for the Democratic Party. Many of us feel that over the decades [we have seen] the complete compromise of the bureau.”

Urey Patrick, a supervisory special agent who served in the FBI from 1973 to 1996, says: “The FBI has mutated over the years. [When I joined, it] was an independent investigative agency essentially devoid of political partisanship, subordinate to but not subservient to the DOJ … Since then, it has inexorably devolved into just another supplicant agency doing the bidding of whatever political regime is in control of the DOJ.

“I don’t know if that is irreparable or not, but I do know that, if there is to be a restoration of FBI integrity, honor and calling to duty, it will be only because of men and women like you [Friend]. For what it is worth, I am with you … in any way I can be — as are countless others.”

The FBI suspended Friend on September 19, who served as an agent and SWAT member for 12 years. They stripped him “of his gun and badge” and escorted him “out of the FBI field office in Daytona Beach, Fla.”

The FBI declared him “absent without leave last month for refusing to participate in SWAT raids that he believed violated FBI policy and were a use of excessive force against Jan. 6 subjects accused of misdemeanor offenses.”

The left cannot point to Friend’s politics because he did not vote for Trump in 2020:

This American hero, the father of two small children, has blown up his “dream career” because he could not live with his conscience if he continued to be part of what he sees as the unjust persecution of conservative Americans.

Friend, who did not vote for Donald Trump in the 2020 election, said he told his immediate boss twice that he believed the raid, and the investigative process leading up to it, violated FBI policy and the subject’s right under the Sixth Amendment to a fair trial and Eighth Amendment right against cruel and unusual punishment.

WATCH: @mirandadevine & @TuckerCarlson report on FBI Whistleblower Steve Friend’s protected disclosures about FBI misconduct in J6 cases. @EMPOWR_US has been helping him, but now that his identity is public, the retaliation will likely intensify. pic.twitter.com/lY4BTLclqV

Give them the freedom not to round up their fellow Americans.

Sounds like some agents are talking about how it used to be. I’ve heard enough from the current leaders to know the FBI is broken.

I wonder, though… did it ever used to be, or was it all Efrem Zimbalist, Jr.?

And we will see those 30 names in the NYTimes, WaPo etc. exactly when?

The leftists have destroyed the FIB, from within and without.

Once again the fabled ‘good men and women’ are nowhere to be found.

They can be found in comic books, bedtime stories and old black and white tv re-runs.

Crooked to the last man as it drives the honest out.

The same process impacts corporations. A new CEO, followed by importation of the CEOs trusted associates. Some of those CEOs are disreputable, within a few years, a company’s culture is a cesspool.

Cops follow their paychecks, not their oaths.
Change my mind.

Who has allowed and enabled the culture to deteriorate to the point where the Serpico syndrome rules and doing the “right thing” is punishable?

The GOPe and the left.

Once again, “we the people’ need to attack the problem at the source.

Garland and Wray are both insane. Their political mono-fixation has allowed their minds to embrace the dangerous criminality of Peter Strzok, but to a degree unimagined by the founding fathers as it is unchecked. Neither the courts nor the legislature can reign in any, not a single, Federal Department or agency. Those few judges that dare, are quickly relegated to the judicial sidelines. Congress not only has a majority that embraces a one party state run by a perpetual bureaucracy, but has a minority party run by a crooked scoundrel and a shallow, useless RINO who is working for corporations and bankers.

They simply think that the Democrats have successfully rigged elections so that they will never be removed.

Big fingers , that should be a down vote, they really are insane, criminally insane with power

If the FBI is to be restored to its proper role and function, it will take current members to speak out in large numbers all at once.

No. It will require complete abolition of the FBI, with a new force created after a few years gap. A department to investigate crimes without arrest power. Anything they find to be turned over to local authorities or other federal law enforcement agencies as appropriate. Smuggling? CBP. Kidnapping? Marshals Service. Counterfeiting? Secret Service. Etc.

Eliminated and with extreme prejudice.

“We need to re-establish the FBI as the apolitical and independent law enforcement entity that it always was.” […] [When I joined, it] was an independent investigative agency essentially devoid of political partisanship,

It would be nice to believe that, but I’m skeptical. I think it far more likely that it was always like this, but more subtle, so that people on the inside could pretend not to see it.

Since then, it has inexorably devolved into just another supplicant agency doing the bidding of whatever political regime is in control of the DOJ.

Um, no. It doesn’t matter who’s President or Attorney General; both DOJ and the FBI act as Democrats.

So once again, Trump Derangement Syndrome has revealed the leftist infection in yet another American institution.

The way to fix this is for Friend to gather together those supposed (we’re told they exist) active agents who are sympathetic and have them sue the FBI in civilian courts. A publicity campaign will provide exactly that – publicity. Congress will howl, pontificate, do interviews in front of TV cameras in the Rotunda, interviews with Tucker Carlson, and perhaps even have hearings, all of it meaningless. If there’s anything – anything – the country should have learned by now it’s that the government is not capable of fixing itself. Whistleblowers, IGs, special prosecutors, congressional committees, congressional hearings . . . they are all meaningless, useless theater.

Engage some hard nosed lawyers (avoid the beltway) and take named individuals to court, make them defendants. Make it personal.

Don’t come back and tell us it’s all about ‘principles.’ We get lectures about principals and conscience every day. If it’s not personal, it’s meaningless. Cautiously sympathetic, my guess is that this will end up being one more side show that will be replaced by the next one in a few weeks. Many would like to believe it will come to something, it won’t.

Understand, it would be wonderful to see dozens of FBI and DOJ lifers, apparatchiks, and bureaucrats named and standing in the dock, but that will, can, only happen if they are made defendants in a criminal case in a civilian court. Nothing else matters.

> Turchie even said: “The FBI has been collapsed into nothing more than a police agency for the Democratic Party.

I would add one adjective there:
… nothing more than a thought-police agency