“the two candidates are now polling inside the margin of error, according to a new survey shared exclusively with POLITICO” 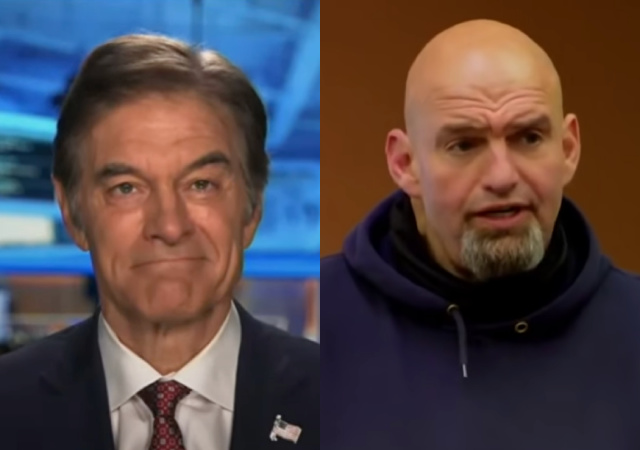 Just a few months ago, it looked like this race would be an easy win for John Fetterman, but that has changed significantly. Dr. Oz has worked very hard to change the odds and earn support.

Two weeks ago, the Cook Political Report changed the status of the race to ‘toss-up.’

The Real Clear Politics average of polls still shows Fetterman with a 3.4-point advantage, but RCP projects the race as a GOP hold.

Even Politico is taking notice and seems to be preparing their liberal readers for a possible upset:

Oz closing in on Fetterman in Pennsylvania Senate race

Republican Mehmet Oz has narrowed Democrat John Fetterman’s lead in Pennsylvania’s bare-knuckle Senate election, and the two candidates are now polling inside the margin of error, according to a new survey shared exclusively with POLITICO.

Fetterman is slightly ahead with 48 percent of likely voters, while Oz has 46 percent, the poll by AARP found. That’s a shift in Oz’s direction since June, when Fetterman, the state’s lieutenant governor, was leading by six percentage points in the AARP survey.

In recent months, Fetterman has come under heavy negative advertising by Oz and his allies, who have accused him of being soft on crime.

Oz, meanwhile, has boosted his favorability ratings since June, when he was emerging from a brutal GOP primary in which his opponents drubbed him as a carpetbagger and faux Republican.

Meanwhile, Fetterman has not done himself many favors lately. His sit-down with NBC News was so disastrous that people in the media went after the reporter who conducted the interview.

In fact, Gisele Fetterman’s presence in her husband’s campaign is so strong that people are starting to wonder if she is the actual candidate.

When you go back and watch this old video, all the warning signs about Gisele Fetterman were there. We should have seen it much sooner.

She dominates. She’s the candidate. https://t.co/HbBAHZO0YK

If Fetterman wins, can’t do the job after a few months, and steps down, the governor can appoint his replacement. If the new governor of Pennsylvania is the Democrat Josh Shapiro, who do you think he will pick? More importantly, do you think Gisele Fetterman won’t volunteer to serve out her husband’s term?

Pennsylvania voters should consider this possibility because it’s plausible.

Unbelievable… Fetterman LITERALLY has a scrambled brain AND he advocates for some of the most idiotic policies imaginable. And yet he is still in the lead? WTF is wrong with people in PA?

or you could ask why can’t the Republican party field winning candidates?

They ALWAYS project big wins for the communist initially and then the race “tightens” as election day approaches. This is by design.

Subjectively, the polls always seem like:
–Six months out: Democrat wave forecast, Republicans might as well not even run.
–Three months out: Democrats are really kicking, look how far ahead they are.
–One month out: Most Democrats are still ahead by a large margin
–Three days out: Narrow margin, but Dems still ahead across the board
–Post election: Republicans eked out a win in a few… well, most precincts, which nobody saw coming.

With a better candidate this would have been a slam dunk.

Oz gives off flaky vibes from his TV days as a know-it-all with little substance in his show.

Yeah, the mentally retarded Marxist idiot who sponged off his parents until he was in his 40’s seems like a legit better choice. /smh

He didn’t say he wants the stroke patient to win but his comment does beg the issue of why Republicans can’t field better candidates in states like PA.

One would think that people see the dementia patient in the WH and ask themselves why they would want someone with even less brain power in the Senate but clearly we need to provide better alternatives even under these insane circumstances.

Or South Carolina, or North Carolina… Oz is no worse than what we have, any of the 4.

I think the point completely sailed over your head. I know that you and a few others really want Oz to win because he was endorsed by Trump but ask yourself if you really thought he was a good candidate sans that endorsement?

Dr. Oz was a daytime TV clown….what does he really offer that makes you confident?

Again, to spell out the point for you, Fetterman is SO BAD that this should have been a slam dunk.

Nope sorry, we have biden in the white house and that puts to rest any notion that a better candidate would improve things. Half the country, 30-40% at least, are complete dopes and would vote for a dog turd with a “D” after the name.

Within the margin of fraud.

Oz is not really gaining. Fetterman is going backwards.

I’m not amazed that Fetterman is leading. I’m amazed that he’s holding office right now. The majority of PA voters must be suffering from traumatic brain injury also.

With the system two-party captured, the Feckless-R’s are the only opposition game. And they are as much an opposition as The Washington Generals.

The game is to use the R’s for access to push for a legit game. AND, full-court-press. Every step; every play; every time. Make them beat Oz with Frankenstein’s monster. Win or lose on any given event, it grinds down the machine a little more, every time.

If he’s within the margin of error then there is no lead. No one is winning or losing. They are tied for purposes of that poll. Doesn’t matter if one has a higher percentage. That’s what margin of error means, statistically.

“In fact, Gisele Fetterman’s presence in her husband’s campaign is so strong that people are starting to wonder if she is the actual candidate.”

In the “Classic Disney” version of this story, Fetterman loses the election, but swallows his pride and asks Oz to remove the Volkswagen from his neck, and everyone lives happily ever after.

Except Gisele, who goes on a nationwide Craigslist quest for Dalmatian puppies.

Just noting that the poll cited is an AARP poll. The AARP is functionally a branch of the Democrat party. If they are even reporting this, even with their biased polls, things must look bad for Fetterman. Doesn’t mean that Oz will win, because it will incentivize more blatant cheating, but it means a chance.

Fetterman should change his name to Frogman because he’ll croak before he can finish his term.

A malformed retard and a Turkish snake oil pitchman. What a choice. This one confounds the lesser of two evils argument- stay home or vote a third party candidate.

And keep the Dems in power in the Senate. Stupid.

Gee, cardiac surgeon or a leftist bum who has never been employed? Tough decision…