Security cameras caught the cowards in the act. I’m shocked they didn’t make any references to handmaids. 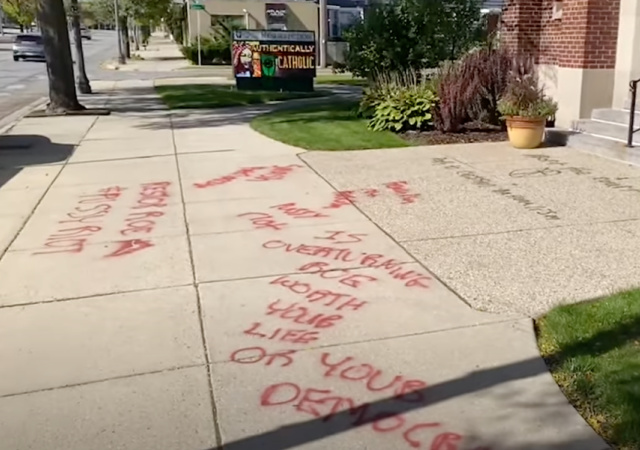 A security video caught three people vandalizing the Church of the Resurrection in Lansing, MI, with pro-abortion and anti-Catholic graffiti.

You are so edgy and original trashing a Catholic church because no one has ever done it before:

The words “Abort the court” and “Death to Christian nationalism” were spray-painted in black on the walkway in front of the steps at the Church of the Resurrection. The vandals also painted a cross with a slash through it between those two statements.

Two upside-down red crosses were left on two of the church’s doors as well.

More red graffiti on the walkway spelled out “Feminism not fascism,” “smash patriarchy,” “Restore Roe,” and “Is overturning Roe worth your life or your democracy?”

Other graffiti, both on the walkway and the church’s LED-lighted sign, contained explicit language. A photo shows young children being exposed to the language as they walked out of Mass on Oct. 9.

One of the messages on the church’s sign read, “Kill all Christian nationalists.”

In true Catholic spirit, the church’s electronic sign states, “To whoever [sic] vandalized our church: We forgive you and we are praying for you.”

Mattson said, “a parishioner had offered her testimony of conversion and healing after having procured an abortion years ago.”

“I think in a spiritual way, this [vandalism] happening that night was a certain sign to us that the healing that the Lord offers is something Satan hates,” Mattson explained.

God bless the parishioner. It also shows that Catholics, and pro-lifers in general, don’t demean or condemn women who have abortions. We know most of them are scared and/or pressured to have an abortion. They need love and compassion. We embrace them and offer them help and support.

I wonder when vandals will learn that trashing our churches does nothing but make us more determined to spread the truth about abortion. Mattson confirmed the attack “encouraged” the members “in their pro-life values.”

But all hail satan that the FIB has executed dozens of swat raids with guns brandished against pro-life pastors and peaceful activists who dare to pray on the sidewalk in front of abortuaries.

Rest easy. The republic is in good hands of ‘devout catholic,’ Joe Biden.

Not just that, but it appears that these Einsteins committed the bulk of their desecration on the public right of way, meaning it’s some government’s problem to clean up, not the church’s.

They said they were anti-Christian but stupidly attacked a Papist place instead.

It’s always interesting watching the various denominations attack each other.

That would indicate that this is genuine and not a hoax.

I am a traditional Catholic so I would use the strappado to elicit confessions from these sinners. Let’s go all Spanish Inquisition on these punks.

The big double lie….. local Cali Dem candidate ad for House of Representatives states the Supreme Court took away the “right” to an abortion and paved the way to a national ban. The guy is a prosecutor also. I’d call him out for stochastic terrorism.

How is that a lie? There was a “right” that the Supreme Court created 49 years ago, and now it has taken it away. And yes, that decision did pave the way for a national ban, should Congress decide to pass one.

Does that include the comfy chair and the soft cushions?

No FBI raids on the perpetrators I am very sure

I am sure the three males in this video will get extra credit for their gender studies class.

I recall in my youth that shotguns full of rock salt used to be an outstanding deterrent, and a long lasting, stinging lesson.

Shotguns filled with buckshot leave a much longer lasting impression.

This graffiti is nothing compared to the indescribably obscene pro-abortion constitution amendment on the ballot in Michigan. And the public as a whole appears blissfully ignorant on what this measure will allow.

More on the creepiness of Americans and how shallow we’ve become:

We are not going to make if politics is the prime factor in how we define ourselves. And it doesn’t help that churches and entire Christian religions have been surrendering to modern culture for decades. I was an altar boy when Vatican II came out and that took all of the mystery and grandeur out of going to mass. Hootenanny masses? Really? Then politics crept in and the endless recurring pedophile scandals didn’t help either. I eventually stopped attending.

I don’t think these attacks are symbolic. They can’t possibly do more harm to the Faith than have the popes, cardinals and bishops. We need another Reformation.

Correction: I don’t think these attacks are anything more than symbolic.

So these Democrats happened to be the only ones with spray paint who could spell?

Yes. They had the good spelling beaten into them with rulers, under the stern eye of Sister Ursula! /ducking

I don’t understand Christ and nationalism together in the same sentence.

It is a pejorative.
You aren’t supposed to understand it.
You are supposed to be muzzled by not wanting to be associated with anything Nationalist.
I consider myself a Christian Constitutionalist. The Constitution was written to keep the Government from being our God or from imposing beliefs on anyone. God wants an individual relationship, which is inconsistent with the idea of a State Church and utopian based social systems. Salvation only comes with God’s Grace and your relationship with Him, not any good works that you perform or church membership.

Are they FBI or from the DOJ?

So why isn’t the Garland DOJ making sure to investigate, indict, and prosecute these terrorists for their actions to these religious places of worship.

The leftist children seem to be enthralled with those.

This vandalism does none of those things. It’s a crime, but as far as I can tell not a federal one.

Any bets on whether the perpetrators are ever caught? (Let alone punished!) The DOJ will probably ask the FBI to investigate—the parishioners, as domestic terrorists.

Nothing says love and tolerance like advocating killing unborn babies. These turds probably curse their mothers for not killing them.

Yet another example of the fact that the human frontal lobe doesn’t fully develop until the mid twenties.