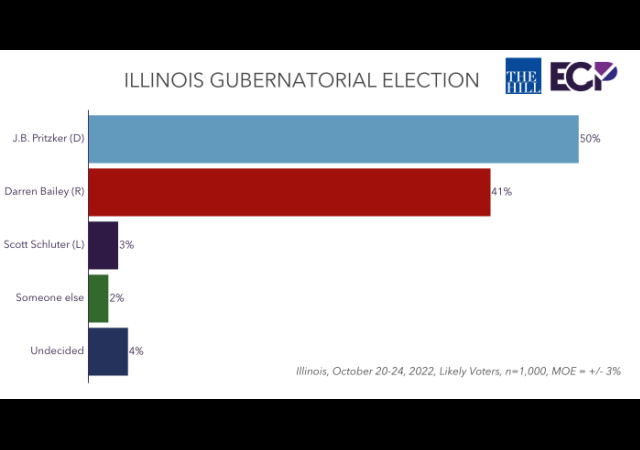 Before I get to the gubernatorial race, here’s a massive surprise in the poll. 46.1% disapprove of the job Joe Biden is doing. 45.9% approve of him.

Geez. Biden crushed former President Donald Trump in 2020, which was no surprise.

Bailey will not win.

But I must write about the race because incumbent Democrat Gov. J.B. Pritzker might only squeak out the win.

The election is less than two weeks away. The latest WGN/Emerson poll shows Pritzker at 50% and Bailey at 41% Bailey gained five points, and Pritzker lost one point since September.

4% of the respondents said they were undecided. But 33% of those chose Bailey, and 27% chose Pritzker. The Libertarian candidate got 5%.

Illinois has had Republican governors, but they are what I call Democrat-Lite.

Former President Donald Trump backs Bailey. He supports the 2nd Amendment. He is outspoken about his pro-life views. He is not Democrat-Lite.

So the fact that Bailey is only nine points behind Pritzker blew me away.

It won’t last long because The Chicago Way will interfere and “fix” the wrongdoing.

The question is why and how? NBC Chicago reported a lack of voter enthusiasm:

Early voting in Chicago is also off to a sluggish start compared to the 2018 election. At this point four years ago, there were 29,000 residents who had cast early ballots, compared to 19,000 this year, according to the Chicago Board of Elections.

Those election returns come as a new poll, commissioned by WGN and Emerson, shows the governor with a nine-point lead. Pritzker received 50% of the vote in the poll, with Bailey receiving 41%.

A month ago, the same pollster showed Pritzker at 51% and Bailey at 36%.

The same poll found that 52% think Illinois is headed in the wrong direction. The state continues to bleed residents (I refuse to move back even though it will always be home).

66% of those in Chicago and 52% in the metropolitan area support Pritzker. 53% outside of Chicago choose Bailey. 40% of the prefer Pritzker

Those numbers show the true colors of Chicago. Illinois would be red without the city of Chicago. Yes, the metropolitan area is for Pritzker and other Democrats, but the hold is not as tight.

Illinois is practically the birthplace of ‘election fortification’.

Bailey would need at least a 5 point pre-fortification margin to win.

So if Boss Hog Pritzker wins by less than 5 it’s safe to assume he only won because the election was heavily ‘fortified’.

As many as it takes.

Still too many stupid people in Illinois. Somebody has got to figure out how to get accurate voting results quicker from the outlying cemeteries.

Correction: Still too many stupid people in $#!+cago.

Please don’t confuse the rest of Illinois with that boil-on-the-butt-of-humanity… it’s an insult.

Particularly those of us who hail from, as the local dialect puts it, “Sudden Elannoy”.

Shitcago is the cause, the cure is exodus. Make it the next Detroit.

So if the horse only loses by 5 lengths when it was expected to lose by 10, that’s a moral victory????? Naaaah.

1) Ads airing are 90%+ by D’s, and by the same percentage are attack ads, overwhelmingly on abortion, some of them hysterical and all of them obviously directed at an ignorant, low info voter.

2) The Ds here could run Satan with a piece of lawn furniture as his running mate and still get 60% statewide, with 90% in Cook County.

3) If it wasn’t so pathetic it would be funny how the party of the working man and minorities are always running white guys. In this case an obese billionaire. Darren is a regular guy and has no chance.

Democrats are great at classical conditioning. No matter how bad things get, they still vote in the same people, but expect a different outcome. There was a recent article written about a town that over a span of 30 years went from a blue collar working safe community to a crime ridden town with no businesses. But will faithfully vote for the Dem’s because the other guy doesn’t want you to have an abortion, even though you are beyond child bearing age.