‘Give Me Back My City’: Parents of Murdered NYC Paramedic Confront Mayor Eric Adams

‘Give Me Back My City’: Parents of Murdered NYC Paramedic Confront Mayor Eric Adams

“[Adams] stood there, his face was flat.” 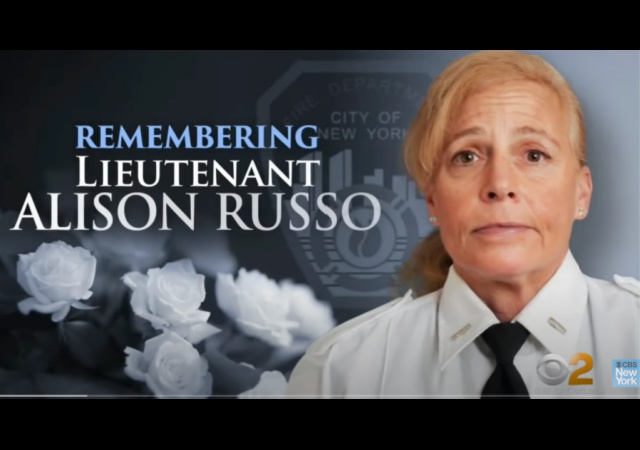 The parents of murdered EMT FDNY Lt. Alison Russo-Elling confronted NYC Mayor Eric Adams at her wake over the violence engulfing the city.

Russo-Elling was stabbed to death in broad daylight in Queens while buying food. Authorities charged Peter Zisopouloss, 34, with murder and weapon possession.

Suffolk County Legislator Leslie Kennedy saw Frank and Catherine Fuocco’s interaction with the mayor. She described it as “courteous.”

An EMS worker said the “parents didn’t hold back.” Their comments included anger and jokes, “but they definitely let him have it.”

Catherine Fuocco did most of the talking, telling the former NYPD cop-turned-Hizzoner, “You know what to do.

“Weren’t you a police officer for 30 years?” Catherine told Adams, according to Kennedy.

When Adams replied “yes,” Catherine said, “You know what to do.

“Please, give me back my city,” the mom said, according to Kennedy.

“It was courteous — they were saying what we’re saying: ‘Make my city better, make my city better.’ [Adams] stood there, his face was flat. At the end, he said some brief statements that were comforting and accepting of what was said to him,” Kennedy said.

Zisopoulos allegedly followed and slammed Russo-Elling to the ground and stabbed her over 20 times last Thursday around 2:20 PM in Queens.

Authorities have Zisopoulos undergoing a psychiatric evaluation. The New York Post reported he “allegedly confessed to the crime.”

Russo-Elling’s EMS unit transported Zisopoulos to a hospital in April 2018 “after he made anti-Asian threats online.” Doctors “diagnosed” him “with a serious mental health condition at the time.”

New York City is a dumpster fire. I’ve noticed a lot of it is because of the lax bail reform laws and progressive district attorneys:

I’d be okay with that if we actually DID move forward. I haven’t experienced the “forward” since the Giuliani Administration.

Andrew Guttman is right. They’re never getting their city back.

It will turn into an irredeemable, violent, dystopian, Marxist sewer.

Or a Democrat socialist utopia…

One and the same.

Adams doesn’t care. Allison Russo is just another “cracker” like he called his white colleagues at the NYPD. He’s also too busy chuckling about NY city’s brand.

Exactly as predicted, Adams spewed some BS about being ‘tough on crime’ to get elected and doesn’t give a crap because the standard liberal position is now that criminals are just ‘misunderstood’.

This is what your city wanted and it wasn’t even CLOSE. Adams got 67%.

Spare me the ‘give me back my city’.

He’s giving you exactly what you voted for.

I keep hearing this word progress being used. All I see everywhere is regression.

Religion is a behavioral protocol: morality in a universal frame, ethics its relativistic sibling, and law their politically consensual cousin.

Faith is one of four logical domains, notably of trust.

Inconvenient when the people living there start having opinions about what they think they’ve contracted & paid you to provide them.