“recent developments that have uncovered additional concerns with department operations” 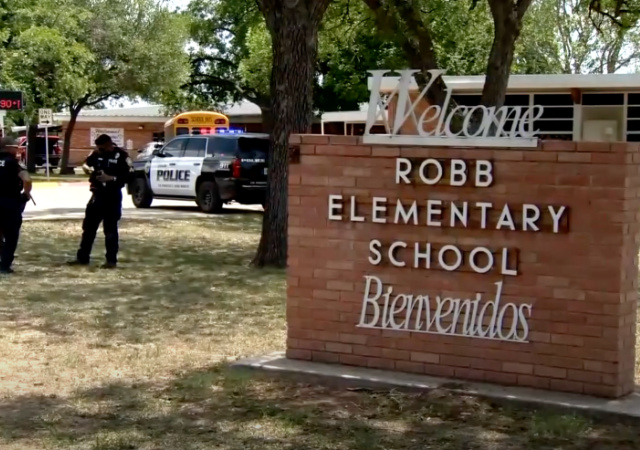 Criticism poured on the department after a May shooting at Robb Elementary School due to incompetent officers. 376 officers responded to the shooting, but none of them took action.

An investigation found that no one stepped up to the gunman due to “‘systemic failures and egregious poor decision making’ by nearly everyone involved who was in a position of power.”

The district also fired Crimson Elizondo, the “recently hired district officer who was revealed to have been among the first state troopers to respond” to the shooting.

I wonder if Elizondo is one of the “recent developments that have uncovered additional concerns with department operations” the district cited in its explanation for suspending the department’s activities.

From The Texas Tribune:

Lt. Miguel Hernandez and Ken Mueller were placed on leave, and other officers employed with the department will fill other roles in the district, according to a Uvalde Consolidated Independent School District press release issued Friday. Mueller decided to retire, the release said.

The release did not specify why Hernandez and Mueller were placed on leave. A district spokesperson did not immediately return phone and email messages.

The school district asked the Texas Department of Public Safety “for extra troopers for campus and extracurricular activities.”

The decisions also came after parents and family members of the victims protested and camped outside the school district headquarters for days:

“245 hr update!!! We did it! And we are going home!” he Tweeted, referring to the 10 days he was camped out at the district headquarters demanding action. Cross added: “They weren’t going to make a liar out of me again.”

Cross previously said school district officials made a liar out of him when he promised his son he would always protect him.

Gosh and it only took them 5 MONTHS to do it, and they’re only doing it because a video went viral.

They should have all been suspended the week after it happened.

Here is the score so far.
How long before purple America figures out that depending on law enforcement to protect their lives and the lives of their loved ones is every bit as prudent as playing three-card street monty?

I support this decision. Should have happened sooner. As angry and disgusted I am about all those police there, what many people still don’t know is that the shooter got 100+ of his 140 or so shots off in the first 2.5 minutes, before any officer was on the scene. If you have a police force specifically for a school system and zero police at a school, please tell me why the hell do you have that police force in the first place?

Unfortunately incorrect. A police officer saw him and his weapons BEFORE he got inside the school, but he decided to ask ‘permission’ from his supervisor to shoot him and by the time he got it, the shooter was inside.

I don’t recall – was that officer a school officer, assigned to the school detail, or just a cop that saw the kid.
And why on earth would an LEO need to stop and ask permission when watching an armed individual heading into a school?

For all practical purposes, 375 other cops did precisely the same thing he did.
And nobody did nuthin’.
What does the average cop make in a month? What’s 376 times that?
What are you paying for, taxpayers?

Why shoot him? Go knock him in the dirt and handcuff him. If he points the weapon at you, you no longer need permission.

Most of the fussing about the law enfocement response is misquided and lacking in merit. Most of the shooting occured in the first 3 minutes,

This is not correct about who it was.

“The officers testified to the Committee that it turned out that the person they had seen dressed in black was not the attacker, but instead it was Robb Elementary Coach Abraham Gonzales.”

From the Texas House report.

So it’s a damn good thing they didn’t shoot him! I suppose Olinser would have shot him without consulting anyone, and would be on trial for murder.

Reports I heard said the “first responder” reported encountering a kid with a rifle. Doesn’t sound possible to mix that up with a coach dressed in black.

From the report again:
“The analysis provided to the Committee strongly suggests that of approximately 142 total rounds fired by the attacker in the building, approximately 21 of those rounds can be identified as being fired after officers entered the building. The first 11 officers to enter the building did so over the course of approximately 6 seconds. It thus appears to be virtually certain that over 100 rounds were fired before the arrival of the first responders.”

Even when police are assigned to be on site, it appears the old adage that “the cops are only minutes away when you need them” now is true.

Meaning no disrespect to you, here is the concept: When seconds count, the police are just minutes away.

Its true at this school, and true acros the entire spectrum on law enforcement. The bad news is that the public cannot afford to have the number of police officers necessary for instant response to such incidents. A balance must be struck. .

“The bad news is that the public cannot afford to have the number of police officers necessary for instant response to such incidents.”
By inspection, the public paid to have 376 officers available for response.
The problem was that their response was actually worse than useless.
Not only did they not stop the shooter or save any of his victims, they arrested parents who wanted to stop the shooter and save some of the potential victims.

Henry– That number -376- is the total number of LE officers who responded to the incident, not the number of officers employed by the school district. In reality, there were only maybe two officers at the scene who had any chance to short circuit the shootings. Of those, one had to ask for permission from someone not on scene (as I understand it) to act; that indicates a hiring/training issue. As noted in earlier comments almost all the shooting/killing was finished within 3 minutes of the shooter’s arrival.

The cost of having a couple officers present at every school, every school-day is more than most districts (if not all) can afford. I stand by my initial statement.

I realize that not all those cops were paid by the school system. But they were all paid by tax money out of somebody’s budget, and not one of them was any more effective than any other. There were enough of them to full a damn ballroom, and they stood around like an annual convention of the “Uh-Oh Squad.” Two, or even one, incompetent cop could have “done nothing” so much more efficiently than the 376 who showed up to rubberneck on the public’s dime.

Some of the report is questionable – because it is based on the testimony of officers who were there. For example the “man in black with a gun” was the school coach who was unarmed.

And it’s quite likely one or more of the initially wounded bled out before their delayed entry. SWAT doctrine may be to not force entry until overwhelming force is available so as to prevent a hostage taker from STARTING shooting the hostages. But if he’s already shooting the hostages that goes out the window.

Then theres the fact that even before any report was compiled the department was caught lying about what happened. Not just mistaken but lying.

I have great respect for most police officers but no belief that misconduct is not possible. Our local North Syracuse police chief went to jail after it was proved he tried to frame a police whistleblower (cops were turning in false time cards) by planting seized drugs in his locker. Another cop during a traffic stop unnecessarily tasered a Mom in a minivan in front of her kids when the Mom disputed his allegation that she violated the asinine NY “no driving while phoning” law and she vocally challenged him again when he changed his story to “OK, I stopped you for speeding” then. I know the traffic lighted intersection in question. Based on his own story and where the minivan stopped the minivan would have had to have the acceleration of a sports car to manage it. Testosterone poisoning.

The mass shooting response here was inadequate and the aftermath actions were flat out “cover our @ss”. This is a one-off Defund THIS police department situation.

Mary Chastain, a proofreader would be of help.
“The gunmen killed 19 children and two children.”
“gunman” and I think it was two adults.
Thanks for reporting on this topic, it is an important one.

Easy, now….you are o a slippery slope to federal police.

Unfortunately, this plays into the hands of the “De-fund the Police” crowd.

This is a police force that needs complete defunding.

Every officer that showed up and did nothing at that school while a gunman was busy murdering children should be thrown off the force and never be allowed in law enforcement again.

I’m trying to wrap my brain around the concept of a school district in a small Texas city having its own police department.

Many local school boards are questionable at running the schools, why are they trying to run a law enforcement agency on top of it?

Yeah, I have never got the whole concept of school police, university police, airport police, etc. I don’t understand why anything smaller than a county needs its own police force. And I’m not even sure why state police aren’t enough.