Meek covered many sensitive topics in his career. Did he come across something that frightened the government? 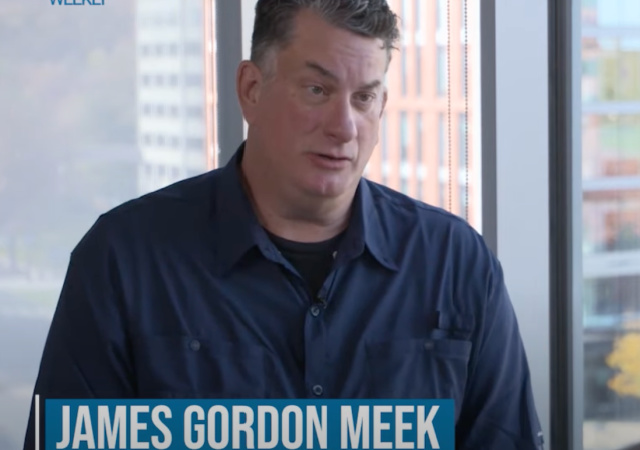 In April, the FBI raided ABC investigative journalist James Gordon Meek’s apartment. People “believe the raid is among the first — and quite possibly, the first — to be carried out on a journalist by the Biden administration.”

Are we in China?

No one knows for sure why the FBI targeted Meek, who once worked as a senior counterterrorism advisor and investigator for the House Homeland Security Committee.

No one has seen or talked to Meek since the raid.

Believe it or not, Rolling Stone broke the story five days ago. John Antonelli described the raid at the Arlington, VA, apartment complex. It sounds like something right out of a movie, someone who committed a vicious crime:

The first thing Meek’s neighbor John Antonelli noticed that morning was the black utility vehicle with blacked out windows blocking traffic in both directions on Columbia Pike. It was just before dawn on that brisk April day, and self-described police-vehicle historian Antonelli was about to grab a coffee at a Starbucks before embarking on his daily three-mile walk. He inched closer to get a better vantage, when he saw an olive-green Lenco BearCat G2, an armored tactical vehicle often employed by the Federal Bureau of Investigation, among other law-enforcement agencies. A few Arlington County cruisers surrounded the jaw-dropping scene, but all of the other vehicles were unmarked, including the BearCat. Antonelli counted at least 10 heavily armed personnel in the group. None bore anything identifying which agency was conducting the raid. After just 10 minutes, the operation inside the Siena Park apartment complex — a six-story, upscale building for D.C. professionals, with rents fetching about $2,000 to $3,000 a month — was over.

“They didn’t stick around. They took off pretty quickly and headed west on Columbia Pike towards Fairfax County,” Antonelli recalls. “Most people seeing that green vehicle would think it’s some kind of tank. But I knew it was the Lenco BearCat. That vehicle is designed to be jumped out of so they can do a raid in that kind of time. It can return fire if they’re being fired upon.”

A new policy from last year says the federal government cannot take a journalist’s documents…except when the deputy attorney general approves the warrant. That means U.S. Deputy Attorney General Lisa Monaco would have approved the search warrant for Meek’s apartment if the raid was about classified information.

Rolling Stone reported that “[A] federal magistrate judge in the Virginia Eastern District Court signed off on the search warrant the day before the raid.”

Could the raid have anything to do with Meek’s last tweet? It implied that we have been helping Ukraine much more than the administration told us. In fact, the help has been happening since Russia invaded Ukraine in 2014.

Definitions of the acronyms:

The outlet explained that Meek was a prominent name at ABC (emphasis mine):

But his track record of exclusives was undeniable, breaking the news of foiled terrorist plots in New York City and the Army’s coverup of the fratricidal death of Pfc. Dave Sharrett II in Iraq, a bombshell that earned Meek a face-to-face meeting with President Obama. With nine years at ABC under his belt, a buzzy Hulu documentary poised for Emmy attention, and an upcoming book on the military’s chaotic withdrawal from Afghanistan, the 52-year-old bear of a man seemed to be at the height of his powers and the pinnacle of his profession.

Could the book have anything to do with the raid and disappearance? The book’s details changed after the raid:

Even stranger, in the months before he vanished, Meek was finishing up work on a book for Simon & Schuster titled Operation Pineapple Express: The Incredible Story of a Group of Americans Who Undertook One Last Mission and Honored a Promise in Afghanistan, which he co-authored with Lt. Col. Scott Mann, a retired Green Beret. Meek even featured a picture of the soon-to-publish book in his bio on social media and frequently tweeted about his involvement. But post-April 27, the book-jacket photo disappeared from his bio, and Simon & Schuster has scrubbed his name from all press materials. The first sentence of the jacket previously read: “In April, ABC News correspondent James Gordon Meek got an urgent call from a Special Forces operator serving overseas.” Now it says: “In April, an urgent call was placed from a Special Forces operator serving overseas.”

Early press materials, available on the Wayback Machine, gushed about Meek’s credentials: “He has covered the rise of Al Qaeda since 1998, from the Millennium Plot to reporting from the ground outside the Pentagon after a hijacked plane hit it on September 11, 2001, to combat embeds with US and Afghan Special Forces in Afghanistan. James has looked terrorists in the eye including 9/11 mastermind Khalid Shaikh Mohammed at Guantánamo, ‘shoe bomber’ Richard Reid and ‘dirty bomber’ Jose Padilla inside the Supermax federal prison, and Zacarias Moussaoui at his trial.”

The book was published in August. Mann is promoting the book but hasn’t heard from Meek:

“He contacted me in the spring, and was really distraught, and told me that he had some serious personal issues going on and that he needed to withdraw from the project,” Mann tells Rolling Stone. “As a guy who’s a combat veteran who has seen that kind of strain — I don’t know what it was — I honored it. And he went on his way, and I continued on the project.”

Mann says he hasn’t heard from Meek since.

Eugene Gorokhov, Meek’s lawyer, said his client “is unaware of what allegations anonymous sources are making about his possession of classified documents.”

Gorokhov continued: “If such documents exist, as claimed, this would be within the scope of his long career as an investigative journalist covering government wrongdoing. The allegations in your inquiry are troubling for a different reason: they appear to come from a source inside the government. It is highly inappropriate, and illegal, for individuals in the government to leak information about an ongoing investigation. We hope that the DOJ [Department of Justice] promptly investigates the source of this leak.”

Rolling Stone outlines Meek’s career, who appeared to be on the way to winning an Emmy for his documentary 3213 Un-Redacted:

It is unclear what story, if any, would have put Meek in the FBI’s crosshairs. Meek worked on extremely sensitive topics — from high-profile terrorists to Americans held abroad to the exploits of Erik Prince, the founder of the infamous military contractor Blackwater. In recent years, some of Meek’s highest-profile reporting delved into a 2017 ambush by ISIS in Niger that left four American Green Berets dead. Meek and ABC then adapted the story into the feature-length documentary 3212 Un-Redacted, which debuted last year on Veteran’s Day on ABC’s sister company Hulu.

A robust Emmy campaign began prior to Meek’s disappearance, with events like a screening and Q&A at the Motion Picture Association in D.C. that the journalist attended with one of his daughters. The story was particularly incendiary because it undermined the Pentagon’s official narrative of what happened on the ground in the African nation, and presented “evidence of a cover-up at the highest levels of the Army,” according to the film’s logline. Adding intrigue, sources say another ABC News investigative journalist, Brian Epstein, also abruptly and inexplicably left the network a few months before Meek. Epstein also worked as a director, producer, and cinematographer on 3212 Un-Redacted (Hulu stopped Emmy campaigning after Meek apparently went AWOL, and the documentary ultimately failed to receive a nomination). Epstein told Rolling Stone, “I’m not commenting on this story,” before abruptly hanging up.

Meek’s apartment is apparently vacant. His ABC colleagues have no idea where he is now. An ABC spokesperson claimed Meek “resigned very abruptly and hasn’t worked for us in months.”

The White House press corps should ask Karine Jean-Pierre about Meek every day. Every administration official should be asked about Meek when addressing reporters.

Where is James Gordon Meek?

You can see how fanatic the Marxist/Communist run media is in this country that they have been completely silent about the state kidnapping and possibly killing one of their own.

To them, protecting the narrative and the march to the radical Socialist/Communist utopia is more important.

You see how everyone sat there, stone-faced as Hu Jintao was dragged away? That’s basically the same thing. This is how dirty wars are carried out.

I sincerely hope he “self disappeared,” rather than our government doing it for him.

I would not be surprised though, since Biden seized power.

“People “believe the raid is among the first — and quite possibly, the first — to be carried out on a journalist by the Biden administration.”

Obama was using GPS Fusion to take out an investigative reporter that I heard on NPR in July of 2017 who was coving the drug lords in Central America. I wish I caught his name. Claimed CIA ops were part of it. What about Gary Webb?

Was that James Rosen? I can barely remember as well.

WH press useless except Peter who should get moving on this.and be on Tucker And Watters shows every night until Meek found.

Could be an Intel plant that works for interest or is special ops and is on task now.

I wonder what the threat was that put him on the lam with the federales? He was long gone when they raided and took his entire apartment “downtown”

First Jan 6, now a bald-faced kidnapping. It appears that all due process has been short circuited.

If that’s the case, then the FBI thugs put it there.

I don’t think they would just let him disappear, he knew too much

This is scary beyond belief

Said he had a daughter, wonder if she k owns where he maybe

Probably not, if he is free, which I doubt, and if he’s not, they will make sure he never resurfaces again…

This is our America now

Interesting how ABC just sat on their hands and didnt ask any questions what so ever eh.

Why its almost as if these clowns are in on the action as well.

There’s a Russian word that comes to mind from the Soviet days. Vzyali.

Sorry, I can’t bring that one to mind. I am thinking that he was made an “unperson” or was disappeared. We may see a lot more of that after early November.

Died during the raid, either tazed to death, shot, or had a massive stroke or heart attack. That has to be hidden. No doubt he is in a barrel of cement at the bottom of a river or lake by now.

Samizdata is a thing.

This sounds familiar. A raid over supposedly classified documents where the FBI can hide what the actual accusation is.

Samizdata was the Soviet-era term for unsanctioned, suppressed information. Info leaking out: suppressed, unofficial, limited, ad hoc, but getting out anyway. People and venues pop up, then fade away. Stuff gets away from the narrative-controllers.

Nobody much heard of this journalist, or what he was on about. But that’s out now, even after they disappeared him, n stepped on his content. The most compelling example of this that I know is Sharyl Attkisson. You can’t stop the signal.

Resigned very abruptly? Got that in writing, or is that a bizarre euphemism for “disappeared”?