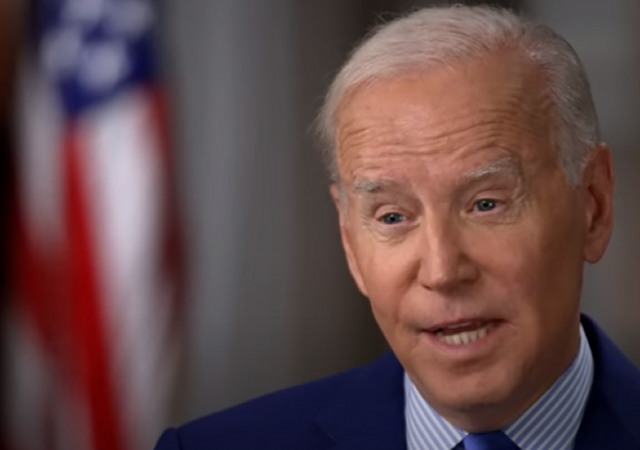 During an interview on ’60 Minutes’ this week, Biden said that American soldiers would defend Taiwan from an invasion by China. It was shocking that Biden said this out loud, and the White House quickly walked back his comments.

Once again, we must ask. Who is in charge here?

Last Thursday, the same day 60 Minutes spoke to President Joe Biden, Vladimir Putin met with China’s leader, Xi Jinping. There’s concern that Russia’s war in Ukraine could inspire China to attack the island of Taiwan. U.S. policy since 1979 has been to recognize Taiwan as part of China, but remain silent on whether the U.S. military would defend the democratic government there. 60 Minutes correspondent Scott Pelley asked Mr. Biden about that.

“What should Chinese President Xi know about your commitment to Taiwan?” Pelley asked the president.

“We agree with what we signed onto a long time ago,” the president said. “And that there’s one China policy, and Taiwan makes their own judgments about their independence. We are not moving– we’re not encouraging their being independent. We’re not– that– that’s their decision.”

“But would U.S. forces defend the island?” Pelley asked.

“Yes, if in fact there was an unprecedented attack,” Mr. Biden said.

“So unlike Ukraine, to be clear, sir,” Pelley said, “U.S. forces, U.S. men and women would defend Taiwan in the event of a Chinese invasion?”

This is not the first time Biden has contradicted his administration on Taiwan.

For the third time since August of last year, the White House walked back comments by President Biden on Monday implying the US would aid Taiwan if the island nation came under attack from China.

During a joint press conference with Japanese Prime Minister Fumio Kishida, Biden was asked if the US would be prepared to defend Taiwan if such an attack took place.

“That’s the commitment we made. We agree with the ‘one China’ policy. We signed on to it,” Biden added. “All the attendant agreements [were] made from there. But the idea that that can be taken by force, just taken by force. It’s just not — it’s just not appropriate.”

It’s not just Taiwan. Who is running this show?

He is not in charge. pic.twitter.com/XWzIhpjEIx

I sincerely hope young voters pay close attention to Biden’s Taiwan comments. Trump is a diplomatic dove compared to Democrat leaders, but Dems and the media have convinced them that Trump threatens their safety.

It is not new news that Biden is not in charge but his video comments can be put to good use by the opposition should they decide to do so.

What this likely tells us is that Brandon’s handlers would not approve were he to order US military to act in defense of Taiwan. Brandon is the one who signs the orders, not Susan Rice. So how does China interpret this? Depends on what Gen Milli Vanilli illegally tells them. It’s the new multi-channel protocols that nuclear powers use to communicate with each other during potential WWIII situations.

Don’t worry folks, it’s like Kamala says: we have been clear, are being clear and will continue to be clear… Everything is under control.

Joe cannot even get to the Queen’s Funeral on time. So, he has to sit at the back. That is Biden in a nutshell. As the Oscar Winning Rabbit says, “What a maroon.”

Every time Biden talks to the media the WH walks it back within 24 hours.

SOP for the Biden regime.

At least Jerry Ford stumbled DOWN stairs. Everybody has done that.

I can’t wait for Kareen to inform the press corps that Joe Biden in no way speaks for the Biden Administration.

Who is this ‘White House’ guy who repeatedly overrules our CEO, our Commander in Chief, the figure to whom our vast military answers…. who is this person ‘White House?’ Don’t remember his or her name being on the ballot. Where does he or she get the right to say that The President is wrong? Why, it’s almost like Biden is just a marionette whose strings are being pulled by some unseen manipulator behind the scenes…. Say it ain’t so, Joe

Clearly, it’s Senator Sheldon Whitehouse. We are all f*ked.

If the President were actually a marionette then he wouldn’t keep saying things that had to be walked back. The problem is he’s not a marionette, so no matter how well they drill him every so often he goes off script and says what he really thinks. And then they have to tell everyone “No, we won’t let him actually do that”.

Not particularly reassuring, is it?

Their fault for choosing a retarded pedophile as a marionette.

“Joe Biden is stupid. He has been making “gaffes” for over 45 years. The dinosaur media, a wholly owned subsidiary of the Democrat party, have been covering up for him for decades. Now he has demintia. His family and party are commiting elder abuse.”

All true but remember Biden was “chosen” BECAUSE of all that.

He is no functionally different than a hologram and that’s exactly what the puppet masters wanted.

When he appears he repeats: “Please state the nature of the situation and the propaganda you would like me to spread”

Like every other program, every once in a while he glitches and says something he thinks then they have to walk him back.

Biden is the political equivalent of the Alzheimer patient wandering far from home in his pajamas….

The federal agencies are in charge, each one with a Democrat at the helm. On the world stage, the CIA, DIA and Joint Chiefs of Staff are in charge. The world knows that our Vegetable in Chief runs nothing but his mouth.

Scads of unelected officials who cannot be voted out of office. Welcome to Democracy, Democrat Party-style.

They were all appointed with the senate’s consent, and can be removed by a majority of the house and two thirds of the senate. Or by the president.

He will defend Taiwan’s border, but not ours. Got it.

Clean up in Aisle 4…

This analysis is silly. Of COURSE Biden is in charge. He is completely, absolutely and thoroughly in charge. His in-chargeness is as strong as his historic election win was legitimate.

LI needs a “sarc thumb” vote.
Like Yelp’s “Funny,” which has been repurposed by users to indicate the much-needed, “You’re full of it.”

Maybe the recipients of Biden’s student loan forgiveness should be first to be drafted to defend Taiwan. Give them a chance to show their gratitude to the U.S. taxpayers.

Most young voters wouldn’t know the difference between China the country and china the dinner plate.

I see nothing wrong with defending Taiwan. What’s stupid is to say the quiet part out loud, but that’s Biden’s most dependable feature….that and speaking nonsense.

By the by, when Trump said anything about other countries, far more benign than this, wasn’t he often accused of giving away national secrets?

Feckless Biden and his administration are going to cause wars and, yet, Americans don’t see it coming. It could easily happen with Russia/Ukraine, as the US continues to ratchet up support for Ukraine and Putin becomes more desperate. It can easily happen with Taiwain/China, either through intent or mistake. It certainly will happen with Iran/Israel/Middle East/Europe, etc., etc., when Biden returns untold billions of dollars to Iran. Biden is a catastrophe. A lot of people are going to die because of this man. And given that Republicans seemingly cannot run decent candidates, it may go on for quite a long time.

That blithering idiot will natter us into a war.

Don’t be a nattering nabob of negativity, Griz.

That’s not negativity, that’s reality. Someone eventually is going to decide it’s worthwhile to test the dementia-riddled, retarded pedophile and then we’ll have the war the establishment has been looking for.

Not for nothing but have you heard about Ukraine and the US sending them billions in weapons, military advisors, providing Intel and imagery assistance, imposing economic sanctions, applying to enough pressure to kick the Russians out of the normal international financial settlement systems, pledging to continue all this support until there is a regime change in Russia as well as SR members of the Admin, members of Congress and Biden himself stating that the US is ‘at war’?

I say we just walk back the Biden presidency. They will thank us.

Actually, if you think about it, this is all good.
For the last 50 years the point of US policy on Taiwan has been ambiguity. We don’t want to say either that we will defend them or that we won’t; we want to keep the mainland Chinese guessing. Well, what better way to do that than for the president to keep saying one thing and his staff to keep walking it back? Now nobody knows what we would actually do, so the PRC certainly can’t know.

In a way, yes. In a way, no. I believe I’ve seen it described as ‘Strategic Ambiguity’ before. In short, we SHUT UP about it. China maintains its fiction of One China, Taiwan remains a free and democratic trading partner, Communist China remains a trading partner, and nobody gets nuked.

Bro…that’s fine for grade school but not for Nations or are you being sarcastic?

Speak softly and carry a big stick works much better than speak loud gibberish and carry a water balloon.

considering only the lines of supply, chinese forces are what 90 miles from their mainland stocks/personnel? come on

regardless, what must the free world think of a moron that is liable to say anything only to be corrected/have it walked back by his nanny/staff?

I think you are correct. Much like the Dems in the House and Senate went around Trump I believe that is happening now with Biden fir different reasons

Can someone stop Silver Alert Joe before we enter WW3?

They’ve really got to be getting tired of the “cleanup on aisle Pedophile.”