“…whiteness is behind ‘every case of borrowing [she] looked at and white supremacy in some form was a reason why the borrowing was harmful.'” 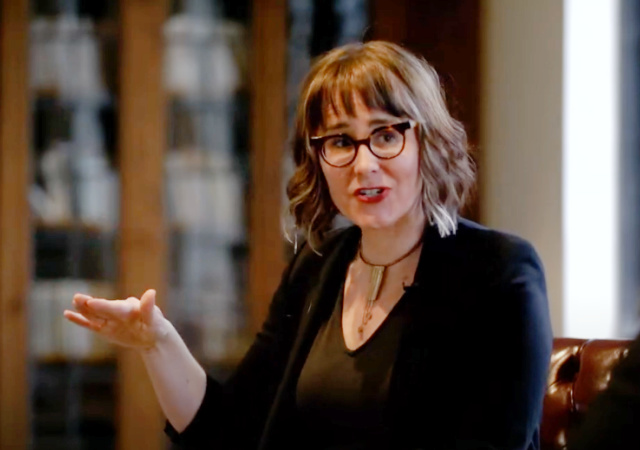 Man, white people suck. Guess I’ll have to tell my rheumatologist I have to stop doing yoga even though it helps with my RA.

Do you know what’s funny? The professor is a yoga teacher.

A professor at Northeastern University says that, like with cultural appropriation, “whiteness” also is behind religious appropriation.

According to Liz Bucar, whiteness becomes apparent when “practices associated with bodies of color are adopted by white agents, when histories of racism are erased, and when forms of appropriation position white Americans as the proper interpreters of the ‘true’ meaning of a practice.”

Bucar (pictured) told Religion & Politics that progressives aren’t as in tune with appropriation of a religious nature as they are with that pertaining to culture.

“Religious combining is not only common, but also encouraged [as] a method to get the spiritual benefits of religions without losing individual autonomy,” Bucar said.

In her book “Stealing My Religion,” Bucar argued whiteness is behind “every case of borrowing [she] looked at and white supremacy in some form was a reason why the borrowing was harmful.”

The book looks at three cases in particular: Showing “solidarity” with a religion (like wearing a hijab), “learning about a religious rite of passage through firsthand experience,” and therapy based on a religion, like yoga.

When it comes to yoga, Bucar argued in order for it to become “mainstream” it had to be “scrubbed of its devotional meanings and presented in spaces that are comfortable for white people”:

For example, when my mom discovered yoga in the early 1970s it wasn’t from an Indian guru, but Lilias Folan, a white woman in a leotard whose popular PBS show introduced yoga to a generation of white American women. Folan’s postures and simple meditation techniques seemed slightly exotic at the time, which was part of their appeal, but they were also packaged in way that was accessible and comfortable for my white Protestant mother.

Rumya Putcha, a South Asian scholar of performance studies, shares a powerful story on her research blog, Namaste Nation, that illustrates the role of yoga in creating public white spaces. When Putcha lived in Texas, she was a member of a local yoga studio. Another member who was a white woman used a pun, “Namastay together,” which offended Putcha as a desi woman. But when she voiced her concerns, the white member tattled to the studio owner, and Putcha was asked to leave the studio. This illustrates what can happen when white privilege is triggered.

Wiping out history? Ever hear of the 1619 project?

Cultural “borrowing” or appropriation? Hey, Liz! The other dizzy Liz lives in Cambridge and pretended to be an Cherokee to snag a job at Harvard as a “person of color.”

Do tell us more.

P.S. And why aren’t you giving up your lofty position in the Ivory tower to make it a “tower of color?”

A friend pointed out last year that Juneteenth was Fathers Day minus one.

So now even knowledge must be segregated while we “diversify?”

Does any of this surprise you?

From the Northeastern U. page:

Liz Bucar is a leading expert in religious ethics. Her research and writing covers a wide range of topics—from sexual reassignment surgery to the politics of religious clothing–but generally focuses on how a deeper understanding religious difference can change our sense of what is right and good. She is the author of four books, including her most recent, Stealing My Religion: Not Just Any Cultural Appropriation (Harvard 2022) and the award-winning Pious Fashion: How Muslim Women Dress (Harvard, 2017). At Northeastern Bucar teaches courses on sexual ethics, Islam, cultural appropriation, and the popular comparative religion program in Spain that includes a 150-mile hike on the Camino. Her public scholarship has appeared in The Atlantic, The Los Angeles Times, and Teen Vogue. Bucar is Director of Sacred Writes: Public Scholarship on Religion, a grant-funded project that provides support, resources, and networks for scholars of religion committed to translating the significance of their research to a broader audience.”

Any of this a surprise? And save her image for Halloween…

As a white woman, she has no business talking about appropriation. Her entire existence is a result of Western Civilization learning and adapting what it encountered to strengthen itself. Cultures that don’t “appropriate” and adapt die.

whiteness is behind religious appropriation

I wonder what the millions of people and dozens of cultures violently erased by Islam think of this idea.

“Folan’s postures and simple meditation techniques seemed slightly exotic at the time, which was part of their appeal, but they were also packaged in way that was accessible and comfortable for my white Protestant mother.”

Next time she orders Chinese takeout, I hope they deliver her Pig Brain, Fried Bee Pupae, and Dog Hotpot.

I wonder how the professor responds to the notion that White Christians are borrowing Middle Eastern religion given Christianity originated amongst the Jews?

Obviously, all those minor religions would have arisen to evangelize the world if only the proper people had been allowed to flourish.

And, yes, they’re white. After all, Larry Elder is the face of black white supremacy.

Why are academics so illiterate? Borrowing, or rather adopting, adapting, and improving, is a fundamental element of ‘White’ culture dating back to at least the Romans. This professor is thus trying to argue that the very concept underpinning what made the ‘White World’ so successful and allowed for global dominance, is somehow harmful. Perhaps she’d’ve been happier if the Britons had remained half naked blue painted savages worshipping a bloody pantheon, and the world never advanced beyond the so called Dark Ages?

In her world (where the sky is not blue) the proper races would have arisen to conquer the world and bestow upon us their beneficence, if only the evil white folk hadn’t stolen everything from them.

I notice she didn’t mention the modern “entertainers” and “singers” who wear a cross necklace while screaming words to their “songs” that say exactly the opposite of the ideals of Christianity.
.

The crosses should be upside down…

What, is there a fixed amount of yoga in the world so if I do it some poor Hindi in India can do less of it?
I don’t get it.

So she is her own worst enemy? She should just kill herself for her woke crimes.