One girl asked an employee to make her a sandwich. 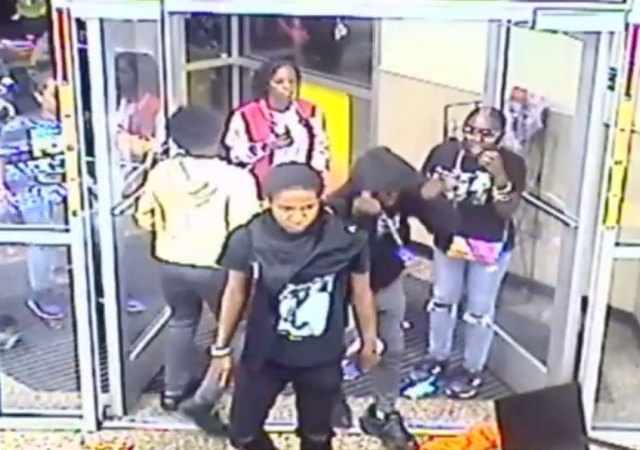 A Wawa in northeast Philadelphia, a city run by Democrats, gave the police a new video showing 50 and 100 juveniles pillaging and plundering the store over the weekend.

The ransacking is similar to the smash-and-grab crimes across the country.

Chaos erupts as a large group of people trash the Wawa at Tyson & the Blvd in NE Philly.@CBSPhiladelphia pic.twitter.com/v2wgxv1ZLZ

A woman asks a Philadelphia Wawa employee to stop recording and make her sandwich while the store is being ransacked around her..!! pic.twitter.com/cejScAz7Fg

The situation began in a nearby skating rink:

Police say the mob came to Wawa from the Rolling Thunder Skating Center next door. An employee there says the mob broke tables.

When police arrived, they broke up the crowd, but there were outnumbered and unable to make any arrests.

“We have to be cautious because if we just had officers running in and just grabbing kids, we would be having a whole different conversation today. And then that’s the unfortunate piece,” Philadelphia Police First Deputy Commissioner John Stanford said.

Here’s the aftermath of a group of clear white supremacists ransacking the Wawa on Roosevelt Blvd at Tyson Ave in Philly. pic.twitter.com/D9jyCxLWcK

These thugs will get away with this, there will be no punishment.

Then the stores will wake up and realize they’re being robbed blind, so they’ll close these stores.

Then the woketards will cry about a ‘food desert’ or some other such nonsense.

Nice… but YouTube has Idiocracied itself to the point where the ad is longer than the video.

I had to think about that for a second. It’s been almost a decade since I saw an ad on screwtube, then I remembered, I have an ad blocker that actually works.

All retailers should stop servicing dens of thieves. When those thieves start whining and blaming racism as the cause, they should be force fed the fact that mostly one race in America is the of cause of decline of cities.

There did seen to be a predominant demographic there.

Oddly enough, the same demographic has those fights in McDonalds, robs the Neiman Marcuses, etc.

Is this what they call “reparations?”

Race?
They was “juveniles.”
“Yutes.”
“Teens.”
OK, some of them weren’t old enough to be teens.
But that’s how the NYT and WaPo couches it, and that’s good enuf for me.

I have no doubt that their free haul is considered partial reparations for their legacy of slavery.

The food desert nonsense is a perennial complaint here in town. A few years ago, a Walmart Neighborhood store was going to be built in said desert. However, the local race hustlers and loser district reps on the city council made so many stupid demands that Walmart pulled out of the deal.

Just bask in the diversity, people! This is utopia!

From the coverage I’ve seen the police are barely even pretending they’re investigating this.

Which is exactly why it happens. Because the thugs know they can get away with it.

This is the behavior of thugs in a society that has decided that enforcement of laws is ‘discriminatory’.

If you want more of this—do nothing.

This is the future in those places where this has been allowed or more importantly the conditions that led to this have been deliberately created. It’s a natural consequence and until the leadership of these areas are forced to reverse their foolish decisions this will continue.

Looks like parents are failing miserably at bringing up their children in the admonition of the Lord. The rod has been woefully spared and you see the results

They should have been wearing Fetterman t-shirts.

And then, in the future, someone will simply start “taking out the trash” in these places. And the media and the self-righteous will scream about “vigilantism” and “no due process” and “how dare they!”

And the rest of us will simply hope the people back the vigilantes and learn their lesson about abandoning power to “elites”.

I warned several years ago that bringing back bell-bottoms would have dire consequences. The entire rest of the 70s came along, including malaise, gas lines, and Death Wish. Yay.

I though it was the bee-hive hairdos, myself…

I am concerned about not seeing enough white people in the videos.

Clearly the white supremacy of the person taking the video is why the video disproportionately filmed African Americans.

If properly reported, “50 and 100 [knee-gro] juveniles pillaging and plundering the store.”

a lot of obama’s kids at play

Young Trayvon like kids. Child rearing in many, if not most black communities, is atrocious.. America deserves much better.

Honestly, child-rearing in America sucks overall.
The pathologies are simply different depending on the underlying culture.

AWFL culture gets you this instead of the above:

Some groups suck far, far more than others.

One of the few things that came out of the pandemic that I appreciate, is online ordering with curbside pickup. Walmart, QFC (Kroger), Home Depot. Grocery works well for everything but fruit, veg, meat where we like to choose our own. QFC makes it easier with keeping track of what we bought with a re-purchase button.

It wouldn’t surprise me if in the next 10 years stores move to that model as a defense against ransacking gangs – with security patrolling the pickup / fulfillment parking areas. That will create another hardship for low-income … computer access with internet and debit/credit cards for payment. No doubt the dems will eventually champion some form of gov’t subsidized home/community internet and terminal access, and forms of digital payment. Ransacking gangs will just re-target delivery trucks when stores turn to secure warehouses.

That happened years ago, with the rest of us paying for it.

One of our many privileges.

It happened years ago? What I meant was a terminal / PC in every home with broadband internet connection. That’s a reality?

Well, unless they use fentanyl.

I like that someone said make me a Sandwich while this was goin on. In other news a big fight at the roller rink makes teens hungry and thirsty. /s.

Wawa’s fault. The teens were no doubt addicted to Wawa’s bacon, egg, and cheese on a croissant “sizzlis”. Like me. They entice you with a “buy one get one free” offer, and they they withdraw it.

(My grandmother-in-law would have smacked me hard for saying that, given their culture of good food and providing for others.)

Sausage, egg, and cheese on a waffle for me, thanks. I’ll take the bagel if I have to.

“And the police just can’t go in grabbing and arresting the kids, there would be a different conversation”

I say fire his a$$, get someone who will arrest their collective ass’es…

Then call in more police. The idea that they do nothing is simply cowardice. Allowing a mob to decide who gets arrested is what got them to this point in the first place.

Yep. Wade in and start cracking.
If you arrest at least some of them, you can sweat a few more names, and you’ve at least provided the chance of consequences for committing this act.

Nah, they would be turned loose almost immediately.

This is a “defund the police” city, which has lost a lot of officers and who is not going to get them back for a long, long time if ever at all. The cops still there know if they do anything to offend the Left and their Protected Classes, that the cops will end up in prison. This is the beginning of the process of the dissolution of the city. To the extent that it is not a matter of vote fraud, it is the choice of the people of Philadelphia that these things happen. If these kinds of things upset you, either fix the city or leave.

It’s either CRT is pushing they are owed reparations or Democrats declaring crime is not to be stopped.

Paid volunteers are working center city trying to get suckers to donate to law and order cause. I called out their BS and told them the current DA is terrible. No amount of money donated to liberal causes will fix their problem. So These youths will not face charges in Philly even if arrested.

The big retail chains should very publicly announce that they will close any store that is looted by an uncontrolled mob. The store will only reopen if/when the criminals are arrested and tried.

Announce the policy, and then stick to it. Teach the voters who re-elect the Demoncrats who support the criminals that choices have consequences.

What if it’s looted by a controlled mob?

The FBI isn’t interested in grocery stores, they can rob banks now.

I grew up in that neighborhood blocks away from that store. It was a rock solid blue collar/middle class white Irish Catholic neighborhood where young Philadelphia couples bought their first houses and raised a few kids who played wiffleball and street hockey on the corners and were watched like hawks by the neighborhood moms. It was a great place to grow up,

In recent years Chinese real estate vultures have swept into the neighborhood and bought up all the row houses. They get Section 8 vouchers and rent to ghetto trash. Since the takeover the neighborhood police district went from one of the calmest to the busiest in the city.

Everything they touch turns to absolute shit and Soros puppet DA Larry Krasner enables it and encourages it while he lives comfortably in the most expensive zip code in the city behind walled security. Philly sucks.

This and every other flash mob like this define the reason for signs reading “white only”, “no Negroes”, or, “Restricted clientele” back when privately owned businesses on private property were not “public accommodation”.

If you want to solve a problem, shine a light on it.

The fact is, and this is VERY newsworthy, 100% of such events are perpetrated by mobs of BLACK people.

Why is that? What’s anyone doing about it? Well, what absolutely everyone is doing is censoring the facts of the case, and pretending this isn’t a nationwide phenomenon that’s been going on for a couple decades already.

Think you’re helping anyone by whitewashing the relevant facts? No. Absolutely not. You are part of the problem.

The phone company and/or google could track any of the miscreants and identify them to the authorities. Why won’t they? Note that they couldn’t wait to turn in every peaceful protester in the vicinity of the Capitol on January 6 2021

Reminds me of cancer metastasizing.

What the hell is a Wawa?

It’s now allegedly “racist” to demand that black youth comport themselves in accordance with laws and civilized norms of behavior.

The behavior in the video is the product of fifty-plus years of Dumb-o-crats’ enfeebling, racist paternalism towards, and, infantilization of, black Americans, combined with broken families, kid-gloves treatment by schools and prosecutors who are too afraid to discipline disruptive youth, and, of course, the utterly corrosive, contrived narrative of alleged victimhood/perpetual grievance that gives black youth carte blanche to act as savages, without any fear of punishment or other serious repercussions.

There appears to be one point of commonality in this mob event same as 100% of the other videos of “smash & grab” and similar occurrences. It is taboo to explore it.