Over 2 million Floridians ordered to evacuate as the storm strengthened to a Category 4 hurricane. However, some residents plan to “thug it out.” 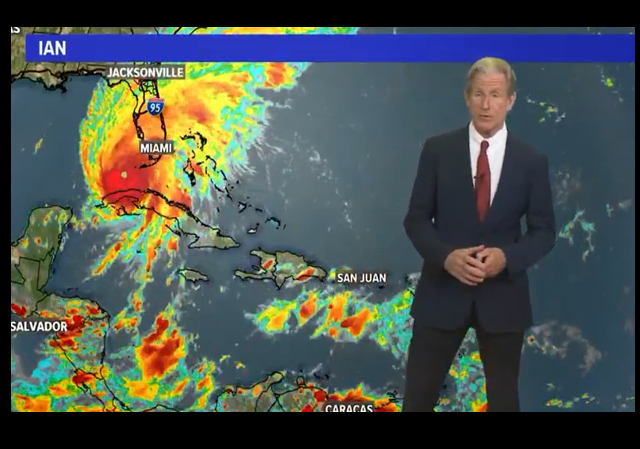 Residents of Florida are now bracing for Hurricane Ian, which has strengthened to a Category 4 hurricane after slamming into Cuba. It is moving north/northwest:

n a 5 a.m. EDT update, the National Hurricane Center said that the center of Hurricane Ian was located about 125 kilometers west-southwest of Naples, Florida.

Hurricane hunters found that the storm had strengthened into an extremely dangerous Category 4 hurricane.

Maximum sustained winds have increased to near 140 miles per hour, with higher gusts.

The agency warned that it was expected to cause life-threatening storm surge and catastrophic winds and flooding in the Florida peninsula.

Ian was moving toward the north-northeast near 10 mph, with a reduction in speed forecast on Wednesday before turning north on Thursday.

The center of the hurricane is projected to approach the western coast of the Sunshine State and move onshore later in the day.

On Wednesday evening and Thursday morning, the center will move over central Florida, before it emerges over the western Atlantic by late Thursday.

Some fluctuations in intensity are possible, the center noted, before Ian reaches the coast and weakening is expected after landfall.

In Ian’s potential path, evacuation orders have been given for over two million people.

“You don’t get a mulligan when your personal safety is at risk,” he said at a briefing. “And so we know this thing is going to be hitting the state directly sometime tomorrow evening.”

Even if Tampa avoids a direct hit, water from the Gulf of Mexico will be pushed up Tampa Bay, leading to potentially widespread flooding, state officials warned.

Some Floridians are choosing to ignore those orders.

Many have decided to stay in their homes despite the warning, which means if they do get into any issues then the emergency services will not be able to assist them.

One woman posted on TikTok: ‘I have no evacuation plan except for thugging it out. I’m going to post updates until I drown or survive.’

Others appeared to joke that they only had one bottle of water to last them for the entire storm, after being woken up by an evacuation siren.

They said: ‘I have one propel, I’m not good at swimming, I got a shark rod so I can f***ing catch fish if I need to eat and I got a couple of granola bars. Lock in boys.’

“Don’t get gas for your generator. A generator ain’t gonna help you if you ain’t got a roof”
“I have no evacuation plan except thugging it out”
“I now have two bottles of propel”

Things I’ve heard on tik tok from people staying in Tampa for the hurricane. #HurricaneIan #Florida

Biden spoke with DeSantis about how the federal government could help the state prepare for Hurricane Ian.

Many are watching how the media will cover the storm as it slams into Florida, anticipating it will be used as an opportunity to target the popular governor.

“We hope Florida gets wrecked and DeSantis blows the recovery efforts” https://t.co/AIsHAqoyKN

Here’s hoping our Florida friends “thug it out” in safety!

TY Leslie. My step son is a little east of Tampa, and we invited him here. He does not want to look like a “pussy” (his own term) SMH Seems like he may have dodged a disaster, as the storm heads a bit more south, towards Punta Gorda.. That reminds me of hurricane Charlie, 2004. Bless and keep the people in this storm’s path. This will be a long day.

At least the “migrants” won’t be on MV if it comes up this way….

Dark Brandon has bypassed DeSantis to communicate directly with the mayors. So it is now confirmed. Brandon is not only a dictator but a petty dictator. Probably doesn’t matter since DeSantis is working well with FEMA and Brandon just screws things up. But it speaks volumes about what a small man our POTUS is.

It makes me wonder about the puppet masters real PR/PA department and how much sense they really have.

They would have to know this only paints Brandon in a very petty and even juvenile position and actually makes DeSantis look like the real adult. (especially after FEMA made it clear they don’t go to the President for guidance)

I think in addition to fear, they are now losing control of the narrative.

The left hoping you hat Florida gets wrecked and that DeSantis blows the recovery is clearly evil. Wishing severe suffering on your fellow citizens just to score political points for the Dems this midterm and wound DeSantis’s presidential aspirations proves they have no soul.

Correction: *The left hoping that Florida*

Every single death, or all of the serious destruction, will be laid at DeSantis’s feet,

Probably not by Floridians, and their opinions are the ones that count. On the other hand, if FEMA blows it will that get hung on Biden?

No, after all the damage Trump did to FEMA (insert claim here)- all blame for everything will be laid at his feet.

IDK, shouldn’t they have been laying the ground work on that already? Not that logic, facts or even basic I/O prep would prevent the attempt to make this about DJT. Same song different day.

This does have the potential to be bad. Lots of new Floridians inexperienced with hurricanes alongside the usual jackassery of hurricane party folks.

Now why would you “think” that? Based on what, exactly? What are you doing here?

Sure but wouldn’t it have been more effective to try and link DJT to this prior to landfall? Of course that would mean comparing Puerto Rico and the continued abysmal performance of their corrupt govt to do much beyond steal supplies, arrange crony contracts and bitch on TV.

I had some friends who had to deploy to assist Puerto Rico last time, which they still haven’t recovered from, and the stories were the same. Mainland sends supplies. Govt of Puerto Rico had no plan beyond receiving it. Distribution of aid or restoration of services outside places with a runway was not a priority. Those outside the cities were and remain effed.

IMO they will attempt to spin the response at State level as fubar but FL has too much experience and competence for that. Sure this is a powerful hurricane but beyond the initial damage and loss of life it won’t be NO after Katrina.

Plus that is a very fine line to walk. Lay it on top thick and the Federal response comes into question. Those man in the street hits could very well end up with folks giving props to DeSantis v thanking Biden.