“According to the Bronx District Attorney’s Office, Hernandez was out on bail on his three cases in the borough at the time of the St. Patrick’s incident.” 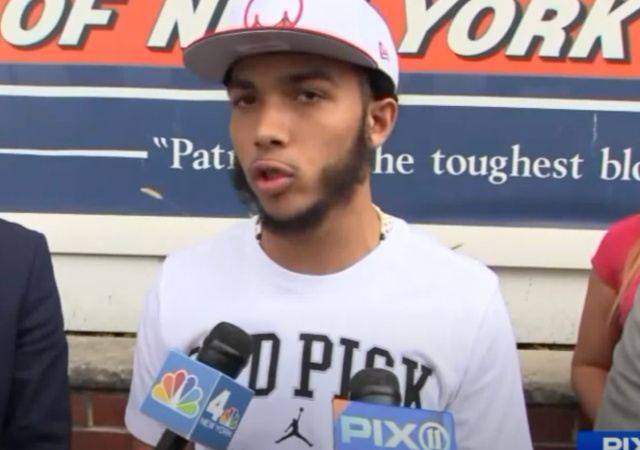 The police arrested career criminalPedro Hernandez, 22, on an attempted murder warrant. From The New York Post:

Hernandez was tracked down by cops and arrested when plans to have him surrender after nearly a month on the lam fell through, sources said.

He was charged with attempted murder, attempted assault, reckless endangerment and criminal possession of a weapon, police said.

Hernandez was being sought on an attempted-murder charge stemming from an Aug. 28 shooting outside St. Patrick’s Cathedral during a dispute over a three-card monte game.

This is what allegedly happened:

In the latest case, Hernandez allegedly tried his hand at three-card monte — a notoriously rigged urban sidewalk hustle — around 5:45 p.m. Aug. 28 and lost cash and a gold chain.

Irate over his loss, he followed the two men pulling off the hustle to their red Mercedes-Benz and fired a single shot into the vehicle — then chased the car in his own black BMW, cops said.

The chase ended up at the parking garage of the Palace Hotel, where one of the three-card monte operators dropped his cash and jewelry on the ground before running off.

Hernandez then allegedly grabbed his items off the ground and left the scene — and cops had been looking for him since.

A witness got cold feet, so the Bronx prosecutors had to drop the case.

But Hernandez didn’t go away. He’s been arrested five times since 2017: “He was busted four times for driving with a suspended license and other motor vehicle offenses, authorities said. He was also nabbed for slashing a person during a Bronx robbery in 2019, police said.”

According to the Bronx District Attorney’s Office, Hernandez was out on bail on his three cases in the borough at the time of the St. Patrick’s incident.

He was free without bail in the second misdemeanor.

He’s a good boy, just starting to turn his life around. He wants to go to college and learn to code.

An “aspiring rapper,” as Howie Carr would …

You left out his stopping at the old folks home to read to them.

And open a restaurant with disadvantaged yutes as employees!

Dude didn’t know playing 3 card monte is a loser. As the saying goes, life is harder when you’re stupid.

Seriously, it actually breaks my brain how somebody could possibly fall for a con that laughable and obvious with the internet at your fingertips. You have to be downright STUPID to fall for it at this point.

Heck with any street hustle you honestly have to be downright stupid to fall for it with everybody having a phone connected to the internet.

1 – if you are gathered around a street hustler and don’t see the sucker, YOU are the sucker

2 – anybody that tells you ‘how to win’ is a shill and in on the con. If they actually knew how to win they’d be taking the guy for everything they’re worth themselves instead of telling you how to do it for free (incidentally this applies to a WHOLE HOST of ‘do it yourself’ scams – if it worked they’d be doing it themselves and living large, not hawking it to others for $49.99)

The only successful game of 3 card monte is in Payday 2, and that’s a video game.

should be able to get out again if he just explains that those three card monte guys were wearing MAGA hats.

This is why 3 strike laws existed, for career scumbags exactly like this trash.

And also why Democrats screamed and cried and stamped their feet to get rid of them – because it was doing exactly what was intended and putting career criminals behind bars where they belonged.

And actually falling for the 3 card monte crap just demonstrates how pathetically stupid he is to fall for such a laughable and obvious con.

I am so SICK of this bleeding heart crap.

If this thug had been in prison where he belonged from the get go MAYBE he would have decided he didn’t want to spend his life there and change something, but letting him loose just let him pile up more crimes and victims.

The Left were screaming how stealing a piece of pizza put someone in the slammer for a long time…. what they didn’t and don’t want to face is that these types are career criminals and even more crime is being done …. not just a slice of pizza when there are multiple convictions in the past that prove career crime. A shoot out after and MB/BMW chase…. crime pays.

Somebody stupid enough and criminal enough to steal a piece of pizza when they know they already have 2 strikes DESERVES prison, that’s the entire point.

Its hard to believe that a seasoned street thug would play 3-card Monte as a mark (not as the game operator or shill). In CA 3-card Monte is identified by name as a form of theft, not a gambling game. [Section 332, CA Penal Code.]

Why is it hard to believe?

Anybody that knows law enforcement that deals with these scumbags can tell you – they’re not ‘seasoned’, smart, or clever. The bulk of them are downright stupid. That’s why they’re street thugs.

“career criminal Pedro Hernandez, 22”
So young to be such a success in his career!

Especially his being an oppressed minority and all.

How do these guys afford BMW’s and Mercedes Benz’s? I have never been able to afford cars like that. Least of all when I was young.

After Hernandez resolves his legal troubles, Merrick Garland will no doubt have a job waiting for him at DOJ, where he can join the totalitarian Dumb-0-crats’ messianic quest to save America’s soul from the evil “MAGA Republicans.”

Maybe they can find a good-paying spot for him in AntiFa, BLM or their Gestapo for arresting conservatives.

Apparently, just about every leftist…

They can’t see patterns and they have no imagination.

Funny. As I was driving home today, I was thinking that (especially concerning economics) leftists can only see like zero moves ahead, i.e., they have no understanding of what the immediate consequence of their demand is inevitably going to be.
If a person can see even one move ahead, he’s likely to be a conservative.

Leftist: “If we cut open the goose, we could have all the golden eggs at once!”
And it’s never only their goose, it’s always a goose that belongs to everybody.
Or, even better, everybody except them.

A man, a child, a “burden”, barely a fetal-American freshly evicted from his mother’s womb. The very model for a minority report and planned personhood.

Democrat politicians have been pulling this 3 card monty scam on the American people for longer than I’ve been around.

This really doesn’t have anything to worry about. Uncle Bragg is gonna make it ok.

– 2015 shooting charge.
– Busted four times for driving with a suspended license and other motor vehicle offenses.
– slashing a person during a Bronx robbery in 2019.

Must have been saving up his lunch money.

“He was busted four times for driving with a suspended license and other motor vehicle offenses, authorities said.

Four times, huh? I’m guessing that he was stopped each time for something other than not having a valid license, so … they’re saying that you really don’t need a license to drive.

He got a raw deal, but he’ll be okay, if he plays his cards right.

Kinda torn on this.
Anyone stupid enough to get suckered by 3 card monte deserves what they get, but robbing the hucksters IS kinda poetic justice.

“he done scored over fo’ hundred on his sat and got his ass axxepted to columbia, ‘sposed to start this fall “

Still the poster child for the bail reforms, I think.

This is what happens when bail is abolished