The man “followed Russo-Elling before slamming her to the ground, mounting her and relentlessly stabbing her…” 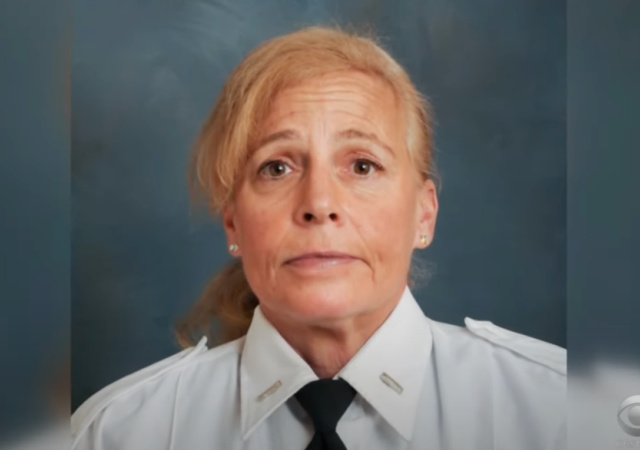 Russo-Elling was a first-responder at the World Trade Center on September 11, 2001.

Peter Zisopoulous [sic], 34, also faces a weapon possession charge in connection to the senseless attack on the 61-year-old paramedic, who was stabbed more than 20 times at 20th Avenue and 41st Street in Astoria around 2:20 p.m. Thursday, police said.

Zisopoulous followed Russo-Elling before slamming her to the ground, mounting her and relentlessly stabbing her, according to police sources and sickening video of the deadly attack.

A witness confronted the madman, but he snarled, “F–k you, f–k you!” before stepping away from his victim and charging at the scooter-riding pedestrian while still holding the knife, police sources said.

The victim — whose injuries included a deep, lethal wound to the chest — was left unresponsive on the ground after her callous attacker ran off, according to sources and the video.

The attack happened when Russo-Elling went to buy some food. The police described it as “a random and completely unprovoked attack.”

A person chased Zisopoulos down the street. He “barricaded himself” in his apartment.

Here is the link to the video on Twitter. I did not view it. But the Democrats and leftists need to witness what happens in their lawless cities.

Russo-Elling “joined the FDNY as an EMT in March 1998 and was promoted to a paramedic in 2002 before becoming a lieutenant in 2016.”

The authorities said “there doesn’t appear to have been any prior contact between” Russo-Elling and Zisopoulos.

But law enforcement sources told The New York Post that Russo-Elling’s EMS unit transported Zisopoulos to a hospital in April 2018 “after he made anti-Asian threats online.” Doctors “diagnosed” him “with a serious mental health condition at the time.”

It’s probably a coincidence, but man. No words.

Allegedly? Was the woman stabbed to death or not? Was the man charged with this or not? Allegedly makes no sense whatsoever. It is pleonasm and a tautology.

Allegedly just CYA word in case the wrong person is identified. The fiends name was spelled differently twice in same article. The word “allegedly” somewhat protects the writer from any legal action from the person who may be named the same as the misspelling. It is chickenshit though and I agree with you.

No, it’s quite smart in an era where a whole online mob can completely target the wrong person and inflict actionable damages on that person.

No, using the word alleged doesn’t protect the writer from a defamation suit. I’ve researched this issue years ago and even if the word “alleged” is used the writer is not absolved of liability.

Not at all. You are “alleged” to have committed a crime until you are convicted of it in a court of law. Innocent until proven guilty even if there is a film of you committing an act.

We’ve got to re-think how the mentally ill are dealt with in our society. I know there were abuses that led to the emptying of the ‘insane asylums’ of the past. But what we have now is equally untenable… they can’t just be dumped onto the streets, because tragedies like this are the result. How horrific, I can only imagine the devastation her family is feeling.

The seriously mentally ill, particularly the ones who endanger others and the drug addicted, must be institutionalized in a humane fashion until they regain the ability to function in society.
That is the key to most of the “homeless” problem, which is in reality a problem of drug addiction and/or mental illness. It doesn’t matter if they want the help or not.
Waiting for someone who is as deranged as this person to ask for help is almost as delusional as these people are.

I am not at all sure that housing murderers for life is a good use of resources. I don’t think that they can be saved, and that resources are better used elsewhere. There are far too many cases where more people are hurt or killed because someone is released.

Agreed.
I don’t want to “institutionalize” the murderers.
They should, generally speaking, be executed.
I am speaking of the seriously mentally ill and/or addicted “homeless” who are destroying the cities.

Perhaps these homeless people should be offered a place with unlimited drugs, or cure. Evolution in action.

Exactly. The ACLU successfully argued homeless people have a right to be homeless, which is BS, and that insane aslyums violate the rights of crazy people. We are all wise off from these smartasses arguing such a thing.

The ACLU not impartial anymore, strictly left. They forgot about the right and duty of govt to provide for the security of citizenry; we pay enough for it.

They will never regain their functionality

This is America now, a violent, monstrous land.

Stay away from large cities, they are gone, they belong to the criminally insane

It’s all we have left

“ You should move to a small town, somewhere the rule of law still exists. You will not survive here. You are not a wolf, and this is a land of wolves now.” -Alejandro “Sicario”

Yes, in other words

does it really matter at all ? –this woman did not deserve to die like that–unspeakable

sincerely wish there were compulsory military service in our country for several reasons but most especially for the benefit of our female countrymen–practical, rudimentary self-defense training would benefit everyone but especially women as they are usually at a physical disadvantage against men in a confrontation such as this–it would save the lives and serious injuries sustained by some very essential people in this world

But George Floyd’s the one with a statue.

It’s a good thing the EMT and the bystander were forbidden to have guns, or someone might’ve been hurt.

The “passers-by” couldn’t be bothered to even stop and check her out – and note that several cars passed DURING the attack and just kept going. It isn’t only the mentally ill who are sick in our society.

Have you ever approached a mentally insane criminal with abut her knife with nothing but a phone?

Just saying, I worked with the criminally insane and I wouldn’t,

Well, this was NYC… and they DO have the legacy of Kitty Genovese to live up to.
I have a mental list of a number of situations where I stopped to give someone assistance, whereas if I had not been armed, I would certainly have passed on by.
As much as I know this is tactically unsound behavior, sometimes I feel the risk is outweighed by the opportunity to help someone who genuinely needs help.

Bro, a man stabbing someone is not something I’m going after unless I have a firearm or am Renzo Gracie

Intervening is hard and dangerous. The most broadly illuminating work I know on confronting individual violence is by Ellis Amdur.

It’s a good thing the EMT and the bystander were forbidden to have guns, or someone might’ve been hurt.

The UK is trying to ban public possession of knives because of the rash of Muslim knife attacks. It isn’t working out so well.

According to the totally Democrat government in New York, city and state, having the police involved with people posing threats in the street is not effective. The way to do it is have an EMT or Social Worker handle them.

The fact that some politicians actually want this is scary as hell.

Well, EMT’s and such are unarmed, so they’re easier to kill — better.

I always thought the legal definition of insanity in a criminal case was the inability to tell right from wrong. If this is true wouldn’t the fact that a suspect attempted to flee or conceal his participation in a act be evidence of having said ability which would allow them to be treated accordingly.
Any of you Legal Eagles out there confirm this?

I would like to see the prisoners pay for their lodgings. I’m sure lots of them have access to substantial assets. I’m sure the indigent would be provided 1500 calories a day just to keep them alive. Or feed them Ensure only twice a day like they did that fat terrorist on gitmo. He lost 60 lbs and looked healthy. For the convicts with assets for a fee prisons can offer concierge services for all I care; get paid, keep them locked up and take every nickel from them that you can.

So what time was he granted his no-bail release?
Was he given a lunch voucher and cab fare home?

This story is particularly disturbing to me as three generations of my family including myself grew up just two blocks away on that very street. My heart goes out to the family and friends of Lt. Alison Russo-Elling.