The feds finally have successfully prosecuted a real case of domestic terrorism from the left. 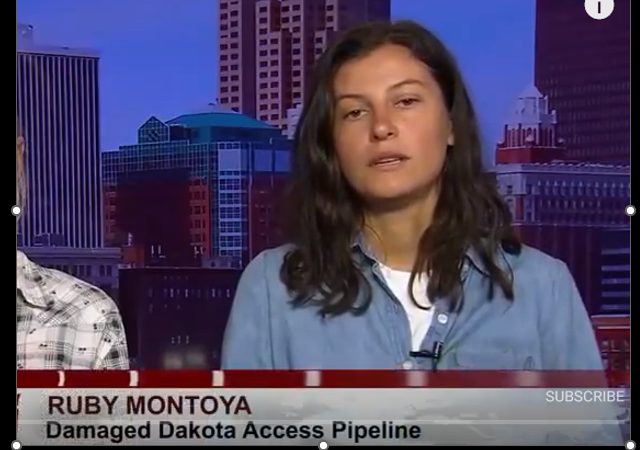 It appears that the feds have actually identified and successfully prosecuted a real case of domestic terrorism.

A federal judge sentenced an Arizona woman on Thursday to six years in prison for using a cutting torch to damage the Dakota Access pipeline in Iowa and setting fire to pipeline equipment in three counties in 2016 and 2017.

The judge also ordered Ruby Katherine Montoya, 32, to pay nearly $3.2 million in restitution together with Jessica Reznicek, a woman who helped her.

Montoya pleaded guilty to conspiracy to damage an energy facility. She admitted to helping Reznicek and others damage the pipeline in several locations in Iowa.

“The sentence imposed today demonstrates that any crime of domestic terrorism will be aggressively investigated and prosecuted by the federal government,” U.S. Attorney Richard D. Westphal said in a statement. He said the seriousness of the actions warranted a significant prison sentence and should deter others who might consider engaging in domestic terrorism. [Emphasis mine]

There is a fascinating video of Montoya and Reznicek explaining how they hit the pipeline:

Reznicek had already been sentenced after pleading guilty.

Reznicek was sentenced to eight years in prison in June 2021 after pleading guilty to a similar charge. She appealed the sentence, but it was upheld by a federal appeals court in June.

Environmental groups opposed the pipeline, which they said risked an oil spill disaster. Some landowners also opposed the use of eminent domain to force farmers to allow its construction on their land, and the Standing Rock Sioux Tribe fought the pipeline, claiming the environmental impact review was inadequate.

As a reminder, the 1,172-mile-long underground pipeline  has the ability to transport up to 750,000 barrels of light sweet crude oil per day. The unit begins in the shale oil fields in North Dakota and continues through South Dakota and Iowa to an oil terminal near Patoka, Illinois.

By way of update, Illinois recently voted to expand the pipeline.

The approval comes after a court decision vacating the previous approval, because the prior approval did not demonstrate how the expansion benefited Illinoisians and the ICC failed to consider the troubling record of the pipeline operator.

The Dakota Access Pipeline and Energy Transfer Crude Oil Pipeline expansion would increase the flow of oil in the pipeline from 570,000 barrels to as much as 1.1 million barrels of crude through the 30-inch diameter pipeline daily. The Dakota Access Pipeline is an infamous conduit, which gained national attention in 2016 when the Standing Rock Sioux stood up against the dangerous placement of the pipeline near their reservation, stretches 1,172 miles across four states.

Both developments are positive news for Americans who appreciate reliable and reasonably priced energy and who are angry at the self-righteous destruction of critical national assets.

I’m assuming they’re trustfund kids because otherwise a multi-million dollar fine is a waste of time.

Maybe they could do multimillion dollars worth of restitution by helping dig ditches for the pipeline construction.

Under supervision, of course.

These girls are possibly the dumbest criminals in history.

So to prove how dangerous this pipeline was to the environment, a radical environmentalist creates a massive pipeline leak. But that’s okay because by their rules, it’s not the results of their actions that are important, it is that they meant well.

“Nice bar you have here. But it’s a danger to the neighborhood. It might catch fire.”

Mostly shocked the Feds prosecuted a protest at all by a Leftist.
Use to watch Democracy Now! decades ago, it realy should be Marxism Now! even then.
Any wagers how long they are inprison?

Exactly. It was a good thing I was sitting down when I read that headline.

“We acted after having exhausted all other avenues of the political process.”

Let them freeze in darkness.

So why all the emphasis on them being “Catholic workers” in that video clip?

Are Catholics known for their propensity to sabotage pipelines after Mass in the mid-west?

“Catholic Worker” is an organization, composed, in my opinion, of ignorant fools who have traded the Gospel of Jesus for “social justice”.

As soon as you prefix “justice” with “social”, you have destroyed it.

In the 60s “Liberation Theology” became a Thing in some Catholic circles – mostly Unis and early SJ (Social Justice, not Society of Jesus (ie Jesuits)). Initially in South American countries which were ruled by Oligarchies (most of them). Was a way for Catholics to justify cozying up to communist liberation groups while ignoring historical bad treatment of Catholics whenever and wherever communists became the new oligarchs in a country.

They sound like a couple of Pope Francis fan girls to me. Property destruction essentially equals theft. But remember his recent statement that “the 10 Commandments are not absolute”?

In the 60s “Liberation Theology” became a Thing in some Catholic circles – mostly Unis and early SJ (Social Justice, not Society of Jesus (ie Jesuits)). Initially in South American countries which were ruled by Oligarchies (most of them). Was a way for Catholics to justify cozying up to communist liberation groups while ignoring historical bad treatment of Catholics whenever and wherever communists became the new oligarchs in a country. In the US became the home for Catholics opposed to The War.

As soon as you prefix “justice” with anything you have destroyed it. Any “adjective justice” is injustice.

1) You can assume appeals, and that the result will be a massive reduction in both sentences or overturning convictions.
2) You also cannot rule out Executive clemency.

Did she not get a Democrat judge? She needs to appeal, demand a Democrat, and aim for acquittal.

It is clearly unacceptable that she got justice rather than the standard partisan pat on the head.

Great; one Dumb-0-crat terrorist down; only about 10 million more goose-stepping, brownshirted, Dumb-o-crat terrorist-thugs in “Anti-fa” and “Black Lives Matter” left to prosecute for their 2020 insurrection, destruction of businesses, neighborhoods and cities, murders and desecration of sundry synagogues across the U.S.