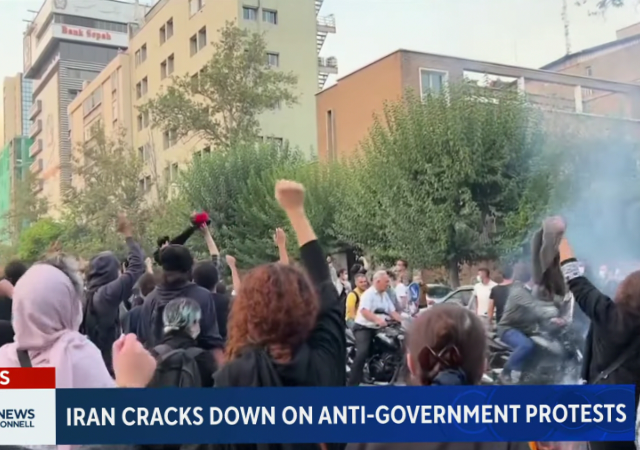 The death toll in Iran is rising as Tehran brings in the Islamic Guard (IRGC) militia to quell anti-regime protests. After eight straight days of protests, the number of deaths have risen to 35, the UK newspaper Guardian reported Saturday.

The nationwide unrest is biggest challenge to the Shia-Islamic regime in recent years. “Anti-government protesters and security forces have clashed in several major cities in the most severe political violence since 2019,” The Associated Press noted.

What began as an anti-hijab protest by Iranian women, with many of them publicly burning Islamic headscarf, turned into an anti-regime protest hit cities across Iran. Video clips circulating on social media show Iranians chanting “Khamenei is a murderer” and “Death to the dictator.”

Protestors also turned their anger of symbols and icons belonging to the Shia-Islamic regime, burning portraits of Qaseem Soleimani, the senior Iranian terror operative who was killed in a drone strike ordered by former U.S. President Donald Trump.

People “tore and burned posters of Qaseem Soleimani —the Revolutionary Guard commander who was killed in a US drone strike in January 2020— in his hometown Kerman,” the Indian weekly Outlook reported Saturday.

“In another video, protesters can be seen torching a massive billboard showing Qassem Soleimani,” the Voice of America noted.

As protests hit cities across Iran, the regime is deploying militia belonging to the Islamic Revolutionary Guard Corps (IRGC).

“Iranian security forces, including the pro-government Basij militia, are trying to quell growing nationwide protests,” the Reuters confirmed. The IRGC-Basij “shock troops which have been at the forefront of repressing popular unrest,” the news agency added.

Chants of "We will die, but we will take back Iran" today in the city of Amol

On Day 9 of the #IranProtests, Iranians continue to take a stance for their freedom. The MEK has reported more than 100 defenseless protesters & bystanders killed by the regime #Mahsa_Amini #MahsaAmini pic.twitter.com/byEzwZXX15

A brave young woman leading the protest while taking her headscarf (Hijab) off.

And protesters chanting
"Death to the dictator!".

Iran’s morality police “have the power to stop women and assess whether they are showing too much hair; their trousers and overcoats are too short or close-fitting; or they are wearing too much make-up. Punishments for violating the rules include a fine, prison or flogging,” the BBC noted this week.

These women in #Iran’s northern city of Sari are dancing and burning their headscarves… anti-regime protests have now spread to dozens of cities from north to south, east to west… all triggered by the death of #MahsaAmini while in the custody of Iran’s morality police. pic.twitter.com/BBDvgC5L1w

“Offenders of Koran Must be Executed,” Regime Loyalists Demand

The regime-organized demonstrators on Friday called for the execution of pro-democracy protesters. The Reuters reported:

State-organised rallies took place in several Iranian cities on Friday to counter nationwide anti-government unrest triggered by the death of a woman in police custody, with marchers calling for the execution of “rioters”.

The pro-government marches followed the strongest warning yet from authorities when the army said it would confront “the enemies” behind the unrest – a move that could signal the kind of crackdown that has crushed protests in the past. (…)

“Offenders of the Koran must be executed,” they chanted.

Iranians Cut Off From The World

Amid raging protests, the regime has blocked people’s access to social media and messaging apps. The BBC reported of “widespread internet outages and residents being unable to access social media.”

“Anger has circulated online after over a week of protests sparked by the death of a Kurdish woman in police custody,” the UK broadcaster reported Saturday. “Internet monitoring group NetBlocks said Instagram and WhatsApp – two of the major communication tools that Iran usually allows – had been restricted.

In past, the shutting down of internet in Iran has been accompanied by a violent crackdown on protests.

The regime has declared all anti-regime gatherings illegal. “The government in Tehran threatened to prosecute anyone involved in “illegal gatherings,” as authorities sought to head off spiraling unrest over the death of Amini,” the Bloomberg News reported Saturday.

Hijab, a Symbol of Oppression

While U.S.-based Islamic groups like CAIR and agitators like Linda Sarsour try to sell hijab to the West as a “Symbol of Freedom,” women in Sharia-governed Iran are being murdered in the streets for defying this symbol of Islamist oppression.

The mainstream media celebrates hijab-donning public figures such as Sarsour and Rep. Ilhan Omar as ‘courageous’ women. But the truth is that Iranian women, braving IRGC bayonets and bullets, are the real icons of courage.

In my opinion, IAP bullshit continues in CAIR.

There are a number of people in our government trying bring Persian spring here.

We in the West are cheering in these people to rebel, but all they’re going to end up is dead.

Clearly, none of the Right People are cheering hard enough.
No #TimesUp action for Khameni?
How about #HandsOffOurBodies? No?
Do we at least have a protest in Martha’s Vineyard we can cut to?
Not even prepared remarks from Admiral Levine? Come on, you’re killing me.

How about “the walls are closing in” and “bombshell reports?”

And the mosque across the street from me, they bought out the church which as changed hands for 40 years, it’s how they do it now. Much easier, take the cross off and BAM!
Anyway the young girls as young as 8 are wrapped up like burritos

I freaking hate it

And yet the Biden Maladministration will continue to seek a nuclear deal with them.

The effective spin is Biden is cozying up to a regime that kills women for te way they stress.

The iranians need to figure out a way to organize, then identify the opposition targets, and neutralize them.

Do that often and the killers will be afraid to come out and enforce the regime’s orders.

But I think you mean “The Iranian women need.” I understand the men are not supporting this.