“DeSantis still hasn’t faced one of the toughest challenges a Florida leader can encounter: a major hurricane” 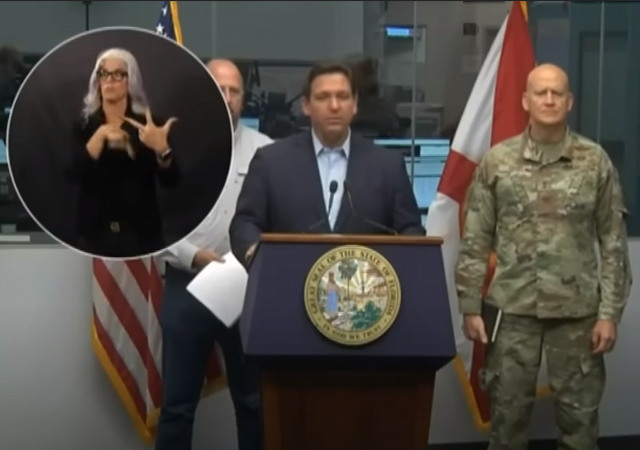 Years ago, Democrats and the media used Hurricane Katrina as a political weapon against George W. Bush. That strategy worked out pretty well for them and now they’re hoping to do the same with Florida Governor Ron DeSantis over Hurricane Ian.

They’re not even really trying to hide it. They’re salivating over the opportunity to use destruction for political purposes.

Liberals Giddy Over Hurricane Ian Because It Might Hurt Ron DeSantis

It’s no secret that the mainstream media and liberal pundit class are not fans of Florida’s Republican Governor Ron DeSantis. From the day he took office, through COVID, and amid Biden’s border crisis, the media has never resisted an opportunity — however frivolous — to attack the man known to conservatives as “America’s Governor.”

The media seethed as thousands of weary blue state residents fled from New York and California to Florida’s ample freedom, lied through their teeth about Florida’s parental rights law, and screeched “Nazi tactics!” when DeSantis gave some illegal immigrants the chance to see how America’s elites live on Martha’s Vineyard. But now, even the media has found another low with their anti-DeSantis attacks: salivating over the chance for a hurricane to devastate Florida and make its governor look bad.

Politico ran a screed early Tuesday morning — “DeSantis faces the true test of any Florida governor” — noting that “DeSantis spent his first term becoming one of the most influential Republicans in the country” before barely hiding its excitement in saying “But DeSantis still hasn’t faced one of the toughest challenges a Florida leader can encounter: a hurricane.

Here’s the media praying for Florida to get destroyed by hurricane, just so they can have something to make DeSantis look bad. https://t.co/YiM7hgLesv

From the Politico article:

DeSantis faces the true test of any Florida governor

Gov. Ron DeSantis spent his first term becoming one of the most influential Republicans in the country — a likely 2024 frontrunner who’s already shaping his party’s national agenda.

But DeSantis still hasn’t faced one of the toughest challenges a Florida leader can encounter: a major hurricane.

That’s poised to change this week as Hurricane Ian, a 500-mile wide monster of a storm, builds strength in the warm waters of the Gulf of Mexico and appears destined to slam into some portion of Florida’s west coast.

Though no governor will frame hurricane responses in political terms, storms shaped the legacies of former Republican Govs. Jeb Bush and Rick Scott, both of whom dealt with multiple major weather events. While no elected official wishes for a major natural disaster, hurricanes offer almost unlimited access to free national media, a huge boost to any governor’s political fortunes.

The commentary on Twitter runs from vile to absurd.

We should use they/them pronouns for hurricane Ian to annoy DeSantis.

My thoughts and prayers for everyone in Florida preparing for Hurricane Ian, except for Ron DeSantis. F**k that guy.

Is DeSantis chartering planes to evacuate Floridians or does he save his political stunts for when there isn’t a hurricane?

Sucks to have a Governor like DeSantis when you’re facing a legitimate crisis like Hurricane Ian… I mean, he’s great at manufacturing a crisis… But you didn’t have to live through Katrina to know that Republicans always shrink in big moments…

Desantis's response to this Hurricane will either be his Christie-Sandy moment or his Bush-Katrina moment https://t.co/DjeiRlR1qt

BREAKING: President Biden does what Trump never would, puts politics aside and pledges all “federal resources” necessary to Florida in its “time of need” ahead of Hurricane Ian even though the governor is MAGA crook Ron DeSantis. RT TO THANK BIDEN FOR BEING THE BIGGER MAN!

That tweet from the Occupy Democrats is especially silly. Biden has communicated with some mayors in Florida, but didn’t speak to Ron DeSantis until people noticed.

Joe Biden is refusing to call Ron DeSantis, the Governor of a state that is about to be hit by a massive Hurricane.

Biden ultimately caves after his apparent reluctance to personally phone DeSantis ahead of Hurricane Ian pic.twitter.com/VtRR2hfzVd

Notice the media are laying the groundwork to attack DeSantis over #HurricaneIan. Here's a question to the head of FEMA from a McClatchy reporter: "Can you describe…the level of the communications w/state officials & has there been anything unusual or any challenges w/that?" pic.twitter.com/j8UV1LsTqR

As long as DeSantis is seen as a frontrunner for 2024, Democrats and the media will continue to target him for virtually anything. They’re more predictable than a hurricane in September.

Off topic, but, I just got an email from Amazon promoting some new releases. One of them is a James Patterson thriller called Blowback. It is subtitled An American President Goes Insane.

Make of this what you will…

Considering he openly hated Trump and it takes quite a while for a book to be written and published, I make of it another idiot leftist whose brain was broken by Trump.

The plot describes a YOUNG President…

I have read exactly one James Patterson book. If I recall correctly I forced myself to read all the way to the end, in case it got better, but all I remember of it now is my resolution to ignore everything else with his name on the cover.

And Niki Haley. And Mitch McConnell. And Kevin McCarthy.

Do you have any proof of any of the above being out to get Ron DeSantis or are you just here to use an actual natural disaster to promote operation demoralize to us?

Knock it off. If you aren’t a Democrat stop acting like one.

So DeSantis will be blamed for the hurricane? He’ll have to get in line behind climate change, which also didn’t cause the hurricane.

This contradicts what Pat Robertson said. Hurricanes are caused by homosexuals. Or something.

I read that hurricanes are caused by Grizzly Bears—too many or not enough. I don’t recall which. So bear with me.

No, it’s that global warming is caused by polar bears.

I think you’re thinking of sinkholes.

Not exactly. I don’t think any evangelicals have said homosexuals cause hurricanes. What they have said is that a society that tolerates homosexual behavior, or any other sin, causes God to stop protecting it. In their view such a society is like someone who refuses to wear seat belts, or to be vaccinated against some deadly disease. Such refusal doesn’t cause injuries or illness, but it means that the person is exposed to danger, and if it happens to strike it will harm him.

Not much different from the religion of climate change that we will anger mother nature if we don’t heed the bidding of high priestess occasional cortex.

That can’t possibly be true.
Here is a headline verbatim from Yahoo News today:
Hurricane Ian packs ‘catastrophic’ storm surge threat made worse by climate change
Good thing the Gulf of Mexico got both vaxxes and both boosters, or it would be even worse!

Democrats and media are sick people.

Funny, based on the GWB years I was under the impression that Hurricanes are the fault of the POTUS, not local government officials.

When have Democrats ever NOT rejoiced over death and destruction as opportunities to score cheap political points?

They’re just taking after their communist forbears who killed over 100 million innocent people in less than a century, most by starvation.

Indeed. Bush went way beyond his duty, and did everything he could have done, even if it wasn’t his job.

Poor Mike Browne did too; he was brought low by his ignorance of the crime wave happening in the Superdome, which he only learned about from the TV because his people in there neglected to tell him about it. Turned out that the reason they neglected to tell him was because it wasn’t happening, and was invented by the TV people, who weren’t there. Browne had the genuine information, but didn’t know that he was right and the reporters were wrong, so he couldn’t tell them so to their faces.

Funny how it’s hard to debunk a vicious gotcha lie because you are tasked with proving it didn’t happen on the spot.

The coverage hype (nearly category 5) has everybody rooting for the hurricane.

“But DeSantis still hasn’t faced one of the toughest challenges a Florida leader can encounter: a hurricane.”

Hurricanes DeSantis has dealt with as Governor of Florida:

I have a feeling that the Cajun Navy and Rednecks all throughout the South are ready to jump in here and assist, as they have in the past. I know it comes as a shock to progs everywhere, but people are able to help themselves, without Big Daddy Gubmint being in charge.

And as I recall, it was the Democrat Mayor and Governor who forced the Cajun Navy to turn back during Katrina.

There is a miniseries on Apple TV called Five Days at Memorial which is about the inept response to Katrina and the way it impacted the people in Memorial Hospital… I highly recommend it. That and Ted Lasso and the Tom Hanks movie Greyhound are all excellent. You can binge watch all of that in a month for $5 and then cancel your subscription.

It’s quite odd. The blame for Katrina was laid at the feet of the feds (i.e., George Bush)–yet they plan to lay the blame for any fallout from Ian on the state (i.e., Ron DeSantis). It’s almost like the democrats and their media adjunct have no principles.

Blaming Bush for both long term and immediate short term Democrat Party blunders. New Orleans was (is) a “Chocolate City” but when things went haywire it was a white issue.

Well it’s the Democrat way, the only standard is a double standard.

whenever there’s a shooting the libs hope for tssiblsshe highest body count possible. So well beg for gun control.

Yes. i know how to spell.

I’m digging the word “tssiblsshe”, though.

We can’t share a nation with these people anymore – not if we want to live lives of freedom and prosperity.

“Mainstream Media and the politicians they put in office as Democrats…”

At some point, we just need to start recognizing the fact that the legacy mainstream media IS the Democrat Party, and the D politicians are merely their minions.