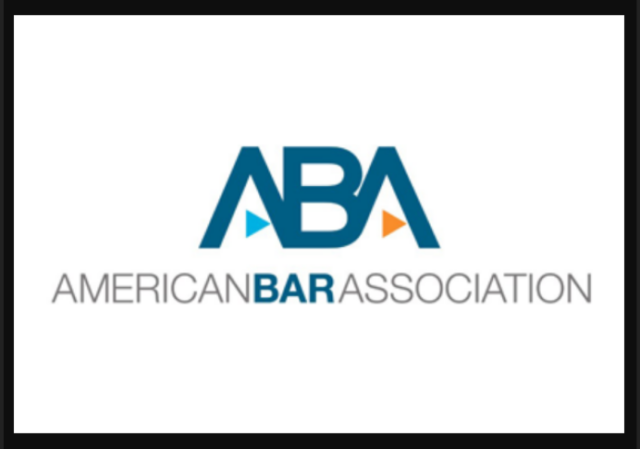 Not satisfied with imposing anti-free speech and potentially discriminatory rules on law schools, the American Bar Association (ABA) supports prohibiting practicing lawyers from engaging in speech that could offend someone in a favored protected group, on pain of losing their law licenses.

We’ve been covering the ABA’s advocacy for anti-free speech and discriminatory ideology. During the past year, we’ve particularly focused on ABA’s abuse of its status as law-school gatekeeper to impose wokeness on law schools. You can find our previous coverage of the ABA here:

The ABA promotes this ideology in other fora too. It recommends model rules for professional conduct that carry a lot of weight with state authorities regulating attorney conduct. Back in 2016, the ABA approved a resolution amending its model rule of professional conduct 8.4 to bar lawyers from saying anything another may find discriminatory or harassing.

We know how this goes. Consider how Princeton University castigated its former professor Joshua Katz as a “race-baiter” for publicly opposing a set of DEI demands including race-conscious admissions and faculty hiring. (Princeton eventually fired this tenured professor on trumped-up claims based on a previously-resolved disciplinary matter.) At Legal Insurrection, we’ve extensively covered how cancel culture brands any challenge to its ideology as “discriminatory” or “harassing”.

The model rule is similar in purpose to changes ABA proposed as a revision to its law school Standard 206(c): “A law school shall annually assess the extent to which it has created an educational environment that is inclusive and equitable under Standard 206(a)(3).” Got it? If law schools don’t punish supposed uninclusive and inequitable speech, like Professor Katz’s criticism of racial quotas, they would risk losing accreditation based on their hostile environment. (Katz wasn’t a law school professor, but you get the idea.) ABA was supposed to present its revised Standard 206 for approval at an August meeting of its House of Delegates, but pulled it at the last minute, likely because of pushback from its public comments (LIF President William Jacobson’s among them).

ABA had more success pushing state-level attorney regulators to adopt its model rule 8.4. At least eleven states have “adopted a rule prohibiting a lawyer from unlawful harassment or discrimination in connection with the representation of a client or the operation of a law firm.” On the other hand, at least ten states rejected proposals to adopt rules based on the ABA model, including Arizona, Idaho, Illinois, Louisiana, Minnesota, Montana, Nevada, South Carolina, Tennessee and Texas.

Pennsylvania is one of the states that adopted a version of the model rule. Its Rule of Professional Conduct 8.4(g) makes it professional misconduct for a lawyer to:

in the practice of law, knowingly engage in conduct constituting harassment or discrimination based upon race, sex, gender identity or expression, religion, national origin, ethnicity, disability, age, sexual orientation, marital status, or socioeconomic status. This paragraph does not limit the ability of a lawyer to accept, decline or withdraw from a representation in accordance with Rule 1.16. This paragraph does not preclude advice or advocacy consistent with these Rules.

A federal court (Eastern District of Pennsylvania) held the rule violated the First and Fourteenth Amendments. (The court had previously invalidated an earlier iteration of the same rule. The Supreme Court of Pennsylvania subsequently amended the rule, without the usual notice and comment period.)

The defendant, Disciplinary Board of the Supreme Court of Pennsylvania, by its chair Jerry Lehocky, appealed to the Third Circuit. Lehocky filed his brief on September 6, 2022. 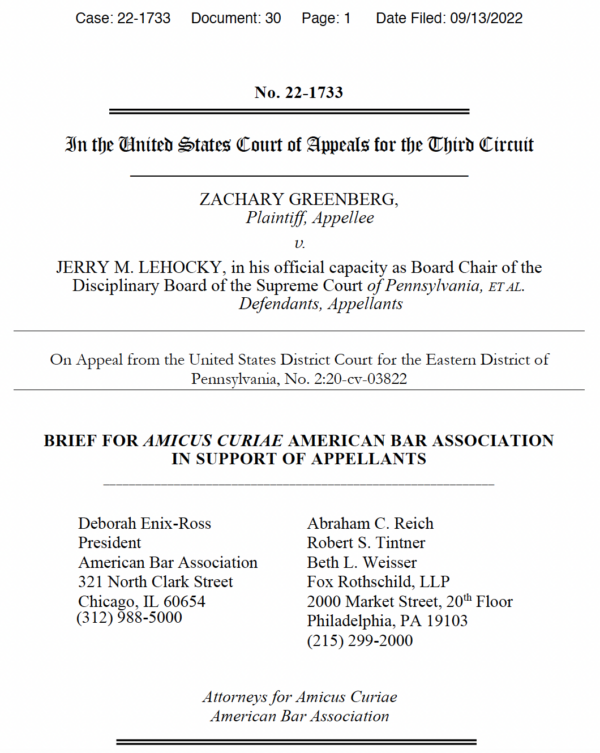 The ABA filed an amicus brief on September 13. This was the organization’s chance to provide its research explaining that factually-proven, illegal discrimination and harassment are rife within Pennsylvania’s legal community, and that the administration of justice is in crisis because of it. In other words, to make its best pitch for upholding the rule by showing there’s a compelling need to police lawyers from being mean.

Instead, the ABA alleged generally that there were “widespread perceptions” that the “legal system” was “pervasively tainted by discrimination and harassment,” that it undermined public confidence in the “American” legal system, and that the ABA and Pennsylvania Supreme Court wanted to “restore that legitimacy.” It offered no concrete, specific information that there actually was a problem, just asserted generally that some people thought there was. It did offer some numbers about women experiencing sexual harassment, but did not cite to the source. (It cited instead to a webpage for the ABA Commission on Women in the Profession webpage, not a specific document.)

Given the obvious risk that the rule would chill speech, as the lower court held, ABA could have limited its model rule to reinforcing proper policing of the profession. Its rule could have stated, proven illegal discrimination and harassment on the job constitute ethical violations, and attorneys guilty of such conduct would be sanctioned accordingly.

Instead, it has set up an administrative proceeding to catch out attorneys voicing opinions unpopular with the ABA. Its method is reminiscent of the Obama Administration’s efforts to ditch due process in school administrative adjudications of sexual harassment charges, which the Biden Administration is trying to surpass. By defining the offense of “discrimination” and “harassment” so vaguely, and ratcheting up the stakes so that an administrative proceeding may destroy a charged attorney’s career, the ABA has designed a rule calculated to chill attorney discourse to voice only “acceptable” opinions.

To juice up the cause LI should get Andrew Dice Clay admitted to the PA bar and then defend him.

Bears prefer puns. Although allergic to poetry, they can give you the cause of anaphylactic shock in a nutshell.

Too much more of the woke and the word ‘American’ will be synonymous with ‘crap.’ I really hate seeing this. We can have excellence or we can have woke. Not both.

No one takes the ABA seriously anymore. Remember, its a trade association of a failing profession dominated by ambulance chasers and grifters trying to make a living though politics and “going along to get along. Intellectually, its not even at the middle school level and it embraces the morals and ethics of “mean girls” and other adolescents.

Given that the ABA has been given accreditation authority by law in numerous states you can’t afford not to take them seriously, even if what they’re doing grossly offends you.

The group “Lawyers Defending American Democracy” have specifically set out to harass lawyers that defended President Trump when the 2020 election was stolen from him (my opinion is becoming increasingly more valid as investigations continue, and the “baseless” crowd is just screaming the word, along with “The Big Lie,” which they stole from Hitler).

They state that “American Bar Association Model Rules of Professional Conduct 4.1(a) and 8.4(c) put lawyers at risk of sanctions for engaging in dishonesty, deceit and misrepresentation — in or out of court.”

How about that fine “work” Letitia James is doing in NY? Or the harassment, mostly if not completely unconstitutional, of conservatives by the DOJ? And the thousands, maybe millions. of lawsuits filed by gov’t attorneys to do little more than harass ordinary people?

The hypocrisy goes on, and the ABA is just a sham, a vehicle for leftists to insinuate their woke garbage into society.

The ABA is engaged in stifling dissenting views .Many state bar groups are engaged in the same as well

Also, please expand Legal Insurrection’s efforts to recruit other attorneys and law firms to join in on this proceeding and all the other proceedings where there are obvious assaults on (i) the legal profession, and (ii) more broadly all citizens’ natural and Constitutional rights.

If a state should remove the requirement to be a bar member to practice law, I’m sure that will shake the Woke out of the ABA…

I don’t think being a bar member is a legal mandate, but passing the bar exam is, and you cannot take the bar exam without an ABA-accredited JD. You didn’t need a JD in many states, many years ago now, but the ABA wanted stronger control over lawyers and the various state legislatures were only too happy to oblige.

Apart from violating constitutionally protected free speech, isn’t it also a threat to “due procerss”? If an opposing party, or even an outside agent, can threaten and effectively restrict the argument a lawyer can advance on behalf of a client, that undermines access to justice and due process.

The ABA, by taking this position is, it seems to me, violating a trust (or even a fiduciary duty) to defend the unfettered ability of the legal profession to fulfil its role in a system based upon the rule of law.

We should be removing their gatekeeping in the legal profession. The American Bar Association power comes from our state governments.

This is a clear violation of civil rights in my opinion

A license is a government-issued credential. This would definitely be a violation of Constitutional rights.

The Oregon Health Authority suspended the license of a rural doctor who refused to follow “their” mandatory WuFlu guidelines. To me it was clear message of “Respect my Authoritay.” That was the day that medical science in Oregon died. Mark my words, Lysenko is making a comeback.

For those who haven’t seen it, “The Death of Stalin” is destined to become one of the all-time greats. The people behind it clearly saw the future, or, they still remember the past. Their depiction of the doctors is definitely where “woke medicine” is destined to go.

Sounds like the ABA is advocating the interests of itself first, loud-mouth object-o-trons second, law schools third, and practicing lawyers somewhere after those, if at all. Seems typical for successful organizations. First they work for their membership and mission. Eventually the membership is fodder, and mission a con, to the aid of some other folks.

How does a membership organization mutate from mutual aid society to 3rd party advocating apparatchiks? Hoffer’s famous observation tracks, but does not suggest how to stop it by illuminating the how or why of mutation from movement, through business, to racket.

These orgs seem inevitably to grab onto gating authority too, making them more important for others doing things, without themselves having to do anything much.

It’s lucrative to be in charge without having to do any particular good. Nice work if you can stomach it.

Unless you think and behave correctly (as they proscribe), the American Bar Association believes that you should not be able to retain legal counsel. And they will threaten the livelihood of lawyers to enforce that agenda.

Too bad the ABA doesn’t publish a list of the attorneys that voluntarily pay dues to the ABA. Then we would have conclusive proof of which lawyers have their woke head up their butt.

How are the leaders of the ABA chosen? Would it be possible to elect new leaders who respect the constitution and civil liberties?

Red states should pull their representatives. An org that hates America should not call itself the American anything.