The Democrats Vote to Raise Taxes, Possibility of More IRS Audits on the Middle Class

The Democrats Vote to Raise Taxes, Possibility of More IRS Audits on the Middle Class

Your taxes will go up, you will likely face audits, and inflation won’t go anywhere. Thanks, Democrats! 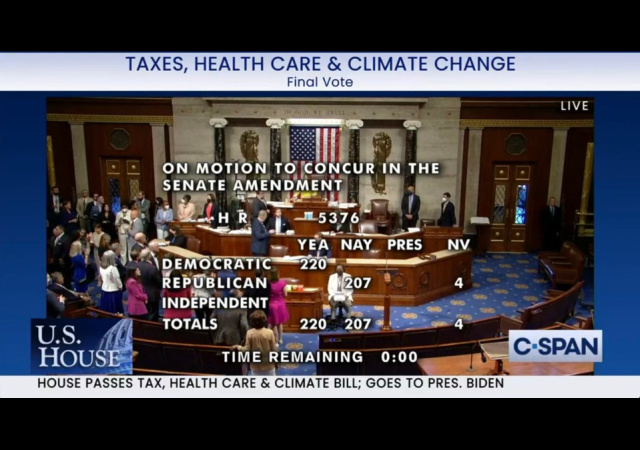 The House Democrats voted to raise taxes, and the possibility of more IRS audits on the middle class.

Goes now to the president. pic.twitter.com/3AWBfLOVAy

WATCH: Nancy Pelosi and House Democrats cheer as they pass a bill to raise taxes on the middle class and worsen inflation. pic.twitter.com/QDUQWd1IdD

They’re bragging about it, too.

Nancy Pelosi: “Today is really a glorious day for us. We send to the president’s desk a monumental bill that will be truly for the people.”

.@SpeakerPelosi: "Today is really a glorious day for us. We send to the president's desk a monumental bill that will be truly for the people – the Inflation Reduction Act. […] Sadly, for all the good that it does, without one Republican vote [in the Senate]." pic.twitter.com/MpKjWhhPwA

But it also doubles the Internal “Revenue” Service by hiring 87,000 agents. More audits but not on the evil millionaires and billionaires.

The middle class will face the brunt of any new audits at the IRS.

Dems' bill contains no protections for the middle-class from new barrage of IRS audits.

“Every retailer in the US who cares about their hard-hit customers should be fighting to block this unnecessary harassment of hard-working Americans.” –@RepKevinBradyhttps://t.co/qgxklR9G3T

Then on Friday, the Congressional Budget Office (CBO) confirmed that at least $20 billion of the $124 billion the IRS hopes to take (it’s not revenue because they didn’t earn that money) from taxpayers in the new audits would come from those making less than $400,000.

Why come after people like you and me? We cannot afford the lawyers and accountants.

Thomas Barthold, Chief of Staff of the JCT, wrote, “As the table shows, more than half of the assessed amounts are estimated to come from taxpayers with reported income between zero and $50,000.”

The JCT also found out that, yes, people’s taxes across the line will change and it’s not for the good:

The $54.3 billion tax increase for 2023, the JCT estimates, won’t increase taxes for anyone with income between $0 and $30,000. But the JCT also points out that its measure of income includes not just adjusted gross income but also employer contributions to health insurance, the employer’s share of the Social Security tax (FICA), and the insurance value of Medicare benefits. So millions of people whose adjusted gross income is below $30,000 will pay somewhat higher taxes.

President Biden is eager to sign this bill, assuming it passes. So much for his campaign promise not to increases taxes on people making under $400,000. 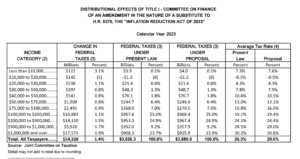 I imagine that – if the November elections are held – and the GOP takes a lot of seats in both houses, the lame duck session will see tens, if not hundreds, of new laws that will cost money, freedom, or both.

Gives the newly seated Congress something easy to whet their teeth on. Just start at the latest abomination and work backwards revoking them as they go.

People tend to analyze these things on political grounds. What will they get in the next election, kind of thing.

But this being the democrat party, the only question should be, “Who gets paid?”

On that last one, the increase is simply ridiculous. They are going to have to bring on contractors to meet their goals. Those contractors will almost exclusively be democrats, working for the democrat party.

This bill was passed for the twin purposes of putting money into democrat pockets and increasing their power to destroy anyone who opposes them.

When you look at it that way, it makes perfect sense. The scale of the theft seems larger than normal only because they don’t see any more chances to legislate themselves money before the mid terms.

Guess who the new IRS armed police will be. Antifa and BLM goons.

A Clockwork Orange is coming true:

While this sucks there is still time to de-fang some of it. Ramping up to 87,000 armed agents doesn’t happen overnight and flipping the house enables it to be de-funded. We are however probably stuck with the tax changes themselves until Biden gets the boot.

It’s also just part of a budget, not a law, as my understanding. It can actually be quite quickly defunded.

It doesn’t help our cause to spread such nonsense. It is simply wrong to hire so many new employees to harass middle class taxpayers. Almost zero new hires will be armed, period. The IRS criminal division has a few agents who assist on actions against drug dealers etc. They get some training at Quantico, become fat and lazy, and have only ever fired their weapons by accident in barrooms while showing off. This rumor started because the service stupidly placed an ad looking for criminal special agents that was meant to appeal to adventure seeking young men. The IRS is the last agency the regime needs to arm. Nobody is going to hand out guns to a bunch of failed accountants who couldn’t get into the FBI. The continued exaggeration of this one point makes us all look stupid.

Wow. Where to start?

The IRS already has a stockpile of 4600 guns and over a million rounds of ammunition (for approximately 2500 armed agents of their current criminal branch).

That was BEFORE the act expanding their force to 87,000 armed criminal branch agents was passed.

Wake up. The regime IS doing it whether you think it’s wrong or not.

“From fiscal years 2015-2019, the IRS ranked eighth among “general and administrative” agencies in arms, equipment, and ammunition spending at $8,697,142, according to the OpenTheBooks report.

Again, that was BEFORE the massive expansion just approved.
Do the math. These guys aren’t here for the hunting.

They are going to push us into another depression and then their WEF farm policies will cause food shortages.

Democratic voters have pretended for so long that they can’t even recognize being lied to their faces, manipulated to believe untruth and newspeak. Truly Orwellian!

The d/prog are going all in. Peak crazy. Never has anyone said ‘hey, what we need to do in order to maintain political control is raise taxes and hire 87,000 new IRS agents three months before the midterms because the voters want exactly those things’.

How is this even possible

“”So much for his campaign promise not to increases taxes on people making under $400,000.””

Hope there will be ads that refer to the CBO’s findings of taxes on the middle class, followed by the House Democrats cheering wildly.

Run them right after the first middle class taxpayer, helplessly confused and crushed by the new taxes and the power of the IRS, is shot in his home by the new IRS Gestapo.

God forbid it ever got to that. The point is that Democrats laugh in your face. They are pretenders when it comes to the people.

Laughing in the faces of people in dis-armed places is one thing. I still believe they will overstep their boundaries in the “wrong” place, and the fuse will be lit.

believe you make a prophetic observation–imagine a good citizen, attempting to go about their life in peace, confronted on their own property by armed agents of the irs who are “authorized ” to use deadly force to ensure compliance due to alleged violations of some arbitrary tax code

faced with the seizure of your property (both private and personal), the potential arrest/incarceration of both your loved ones and yourself and all committed under the threat of deadly force, your options are indeed limited but they’re damn sure clear

This will absolutely make inflation worse, both because of the additional money being printed to pay for the spending, and because the “climate change” provisions will further squeeze our energy supply, making it much more expensive and unreliable, which makes everything more expensive. Like England’s energy grid, for example. And the administration still hasn’t done anything about the Teamster’s and dockworker’s unions on the West coast slow-rolling imports for leverage in compensation negotiations.

Keep all the new IRS agents and re-assign them to the border. Merge the IRS with DHS and let the IRS agents chase illegals. The IRS is relentless.

No. Fire them. Read the ad for the job. The armed and ready to shoot parts tell you that the main applicant pool will be those who had their lunch money taken from them, or are the ones who did the taking. They deserve nothing.

Haven’t we seen this play before?

Captain Renault: “I’m shocked, shocked to find that gambling is going on in here!”

([a croupier hands Renault a pile of money)

Casablanca is the best movie ever made.

Good from the standpoint that often the best medicine tastes the worst.

First, when this hits ( and i suspect it will and hit really really hard)- this will all but end the left politically.

Second, if the conservatives prevail ( true MAGA and a mixture of GOPe/RINO) then this gives a clear and unquestionable task list for them to either undo or suffer from. (Ocare had a long implementation by design so people wouldn’t feel it right off so it snuck in)

Of course they did. Democrats HATE this country and its citizens with a burning hot passion

Meanwhile the US-subsidized drug cartels are now engaged in a full-blown siege of Tijuana and surrounding metropolis.

That’s a city 20 miles south of San Diego and larger than SD, our 6th largest city. And we are spending $60B so far in Ukraine. The US is now officially brain-dead.

agree–though “Citizen Kane” is perhaps more technically innovative, it is “Casablanca” with it’s enduring “star-crossed lovers sacrificing their happiness for the greater good” theme that has such a timeless resonance–but believe it is Laszlo who delivers the real message of the film–viz: