School Board in Fargo, ND, Drops Pledge of Allegiance From Meetings for Not Aligning With Diversity Values

School Board in Fargo, ND, Drops Pledge of Allegiance From Meetings for Not Aligning With Diversity Values

“the Pledge of Allegiance doesn’t align with the school district’s diversity, equity and inclusion values” 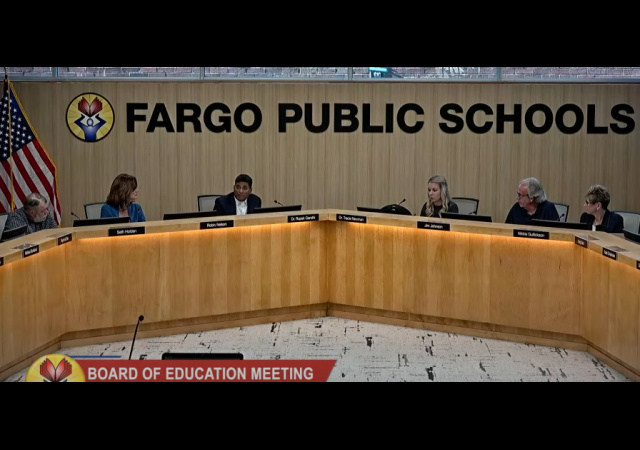 The school board in Fargo, North Dakota, has voted by a margin of 7-2 to no longer recite the Pledge of Allegiance at meetings.

The claim against the pledge is that it doesn’t meet the school system’s commitment to diversity, equity, and inclusion.

In case you haven’t noticed, diversity, equity, and inclusion programs are almost exclusively used to advance progressive, left-wing values that tear down American traditions and expressions of patriotism.

The wrestling match over the Pledge of Allegiance at Fargo School Board meetings has reached a resolution. In a 7-2 vote on Tuesday, the school board moved to not recite the pledge before their meetings.

The debate goes back to February when a motion to have the Pledge recited at meetings, brought forward by board member David Paulson, died for a lack of a motion for a second. The matter worked its way back to a March board meeting, where it passed. The Pledge has been recited at the start of each board meeting since April 12.

Board Vice President Seth Holden then requested that the issue be discussed again at the board meeting on August 9, saying he wanted to rescind the March decision after hearing comments from board members and the public. Holden says the Pledge of Allegiance doesn’t align with the school district’s diversity, equity and inclusion values.

BREAKING: The Fargo, North Dakota school board has voted 7-2 in favor of no longer reciting the Pledge of Allegiance before meetings because it doesn't align with the school's "diversity code" due to its use of the phrase "Under God."

Yes, this is real. pic.twitter.com/r4pOmgYgwe

Here’s more from the In Forum report referenced in that tweet:

The problem that Holden saw in reciting the Pledge of Allegiance came down to two words.

“Given that the word ‘God’ in the text of the Pledge of Allegiance is capitalized,” Holden said. “The text is clearly referring to the Judeo-Christian god and therefore, it does not include any other face such as Islam, Hinduism, Buddhism, all of which are practiced by our staff and students at FPS.”

Even Atheists and Agnostics are excluded from the pledge, Holden added, saying it is a “non-inclusionary act”.

Holden admitted he’s not trying to get rid of the Pledge of Allegiance, but that it couldn’t possibly fit in with the school district’s principles of inclusion.

The people pushing this ideology are obsessed with controlling other people, and are incapable of the tolerance they demand of others.

I’d drop it as forced speech.

I would drop it because I am a libertarian and would not pledge to a nation represented by this Administration.

So many conservatives go nuts over not reciting something t he at – in its original form – was written by a socialist.

I’d pledge my support of most all of the original constitutional philosophy, but pledging to a piece of cloth strikes me as a superstition with no meaning.

Lots of people whose ideas I find entirely abhorrent appropriate that flag and claim it represents what they stand for; so if I pledge to a flag, exactly whose ideas am I validating? The flag has no intrinsic meaning of its own when every crook claims its imprimatur. It doesn’t help that the pledge was created by a confirmed socialist in the first place. Groupthink is a tool.

The “under God” thing aside, I maintain we can’t morally do stuff like come into this comment section and whine about how badly we need to start arranging a “CRA,” then go stand in front of a piece of cloth and pledge our loyalty to “one nation, indivisible.”

Sorry, but I don’t see any sense to it.

Nobody thinks that requiring pledging allegiance to the flag just before participating in a session of American government is an unreasonable or bad standard, and it has never been held to be so by any court.

By the way the people who dropped the pledge didn’t do it because of an imaginary society that has no public standards (because nobody except maybe you but I doubt that) believes in such a society they did it for the reason they said “MUH DIVERSITY!!!!!!”.

“Nobody thinks that requiring pledging allegiance to the flag just before participating in a session of American government is an unreasonable or bad standard, and it has never been held to be so by any court.”

“…the 9th Circuit Court of Appeals in San Francisco actually declared the entire pledge unconstitutional. It was Eisenhower’s addition five decades earlier than caught their eye, as “under God” violated the First Amendment’s guarantee of keeping church and state separate.”

Another judge issued a stay that prevented enforcement, but the ruling still stands.

Long ago case on that. It can’t be required.

Dropping “under God” is poetically correct. It ruins the scansion. It was added in the 50s by somebody poetically deaf.

The pledge, like the national anthem, serves to get the rabble to stop milling around and pay attention to the main event, in general. Beginning of home room, beginning of ball game.

“ Dropping “under God” is poetically correct. It ruins the scansion. It was added in the 50s by somebody poetically deaf.”

More like added in order to hold a vote to prove which congress crooks were troo Murikunz and who the Gawdless Kommunistz were. Few if any voted against it. It was done during the Red Scare hearings.

It was done during the Eisenhower administration, and Ike heartily approved and defended it. The Knights of Columbus claimed responsibility for the campaign and final victory, accurately or otherwise. I was too young to have mouthed the former version, but I remember the KofC boasting contemporaneously.

Does the board have any idea who the citizens of Fargo are, what they believe, and (importantly) how they vote?

It doesn’t matter. The board will just sick the justice department on those who protest.

Nope. I lived in Fargo for 5 years, always refer to it as Fargo, Minnesota.

Question to these board members: Does telling the truth still align with the district’s values?

I ask because each one of you took an oath, once orally, once subscribed, to defend the US Constitution and the ND Constitution (Article VI, Article XI, respectively).

Were you being deceitful?

Are you sure that school board members take an oath to the constitution?

You know, you could have looked up the statute yourself,

They do. Every school teacher has to swear a similar oath.

They took an oath or affirmation. The affirmation option is offered and required by the constitution, specifically to cater for those who object to saying the words “so help me God”. So I don’t see the contradiction between that and this resolution.

Voters can now remove 7 members of the board.

Exactly. Federal funds flowing to Fargo from politically correct taxpayers are intermingled with those who hold the opposite views. Surely they wouldn’t be so obviously fraudulent as to ignore their stated commitment to DEI when it would require actual hardship or sacrifice? /s

Federal money represents “under God”?! How?

It says “In god we trust” Right on it.

The Democrat Socialists (aka the American Communist Party) has been diligently and incrementally trying to remove the Constitution from the U.S. because it doesn’t doesn’t align with their diversity, equity and inclusion values.

If God were a racist, wouldn’t there be only one race?

There IS only one race.
Believe me, you would NOT want to see the other REAL races God rejected..

Maybe change “diversity” to discrimination, since racism doesn’t start with a “D”….

Fire every single one of those communists.

Inclusion? Is this man an idiot? Aren’t we “one” nation. rather than diverse tribes that they want??

Not if the leftists can help it.

Or one nation under the PRC…

Clearly there are not any actual Muslims at the school. Judaism, Christianity and Islam all worship the same God. That is acknowledged in all three religions.

The “we all worship the same god” was one of the bits Mohammed used to try and give his religion legitimacy.

Yes, Jews worship the same God Jesus worshiped. But Christians worship Jesus. Jesus, being a Jew and not a Christian, did not worship himself.

Exactly. “Abrahamic” was an invention of Muslim propagandists, so they can claim false equivalence with Judaism and Christianity, when in fact Islam teaches that nobody but Muslims may legitimately hold power anywhere on Earth, and it is the duty of the Muslims to take that power by any means necessary.

In a way almost moot. Can’t pledge allegiance to something that no longer exists.

The ‘Republic, for which it stands’ no longer exists.

Not to mention ‘liberty and justice for all’.

They are aware that “In God We Trust” is on every piece of currency printed or minted in the United States, right? I remember that the 9th Circus had a case in front of them one time to have it removed.

Of course they’re aware of it. They don’t have to like or support it.

In God We Trust

“Under God” was added in 1954 – I’ve never thought it should be there. I’m in favor of the Pledge, but believe we’d be more ‘indivisible’ if we removed reference to a judeo-christian god from the Pledge.

At this point we will not be indivisible at any forseeable future time, no matter what pledges we do, or don’t, take/say and no matter whether we are religious or not.

The united states of america should pledge allegiance to us.

“I demand allegiance from the Flag of the United States of America, and from the Republic for which it stands, one Nation under God, indivisible, with liberty and justice for all,”

Perhaps if the feebs pledged allegiance to the citizens, they’d behave better.

Compelled speech is a long-standing First Amendment problem. Many times, it works in the favor of conservatives. For example, the Janus case regarding compelled speech using union dues.

Regardless of what you think of the pledge of allegiance, it really does not mean much if you hold a gun to someone’s head and force them to recite it against his will.

^ The above is public record.