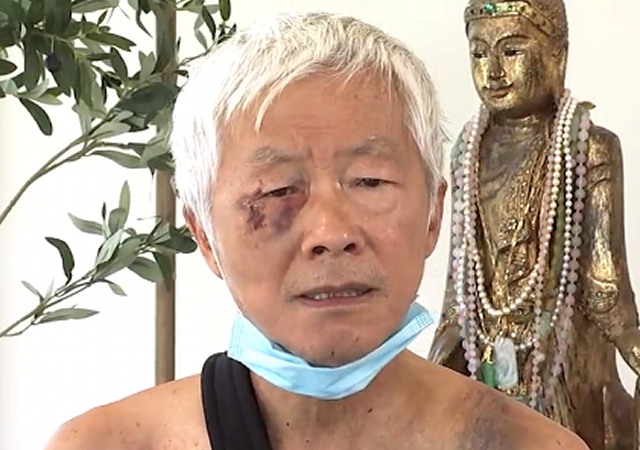 A long-serving public servant in San Francisco was recently attacked and brutally beaten outside his home.

Greg Chew, the commissioner-at-large, who is Asian, was left bloody and bruised. He is also unable to use one of his arms.

A longtime San Francisco public servant is speaking out for the first time after being brutally attacked across the street from his SOMA home.

“I’ve lived here in this building South of Market for 33 years,” says Greg Chew, who points out every landmark surrounding the area of 3rd and Folsom.

Chew’s knowledge also comes from decades of public service, having been appointed to the film, immigrant rights, and most recently, the arts and culture commission, by then-Mayor Gavin Newsom.

But in this city, just one block from his building, he experienced one of the challenges of living in San Francisco.

Tuesday night at around 7:30 as he walked home, out of nowhere Chew was approached by a man.

“He was riding his bike and he actually dropped his bike and assaulted me. I got punched in the face, kicked, beaten,” says Chew.

He was punched in the face & beaten across the street from his SOMA home Tuesday around 7:30PM.

He can’t use his left arm & may need surgery. #StopAAPIHate (Thread ⬇️) pic.twitter.com/bVd9a1jJxi

This attack happened just blocks away from the scene of an attack on a 70 year-old Asian woman last week.

Multiple law enforcement sources told Fox News Saturday they are seeking an 11-year-old boy and three other young suspects in a brutal attack on a 70-year-old Asian woman in San Francisco last weekend.

The vicious assault was captured on video, but no suspects are in custody.

A 14-year-old Black girl is seen kicking the woman in the head in the Anza Vista neighborhood.

A Black male who just turned 18 is also being sought.

Two other suspects were allegedly associated with a group involved in a string of robberies and were reportedly nabbed in Oakland, California.

Leaders in San Francisco need to deal with this issue. They are out of time and excuses.

I’m glad the commissioner wasn’t armed. Someone might have been hurt.

When is the Asian community going to ADMIT it’s NOT white people assaulting and murdering them??

Reminds me of the pro-gay march after the gay nightclub shooting by a Muslim. Banner leading the parade said “Stop Republican Hate”.

But did he have his mask on?

God awful
They are just animals amd the left had grout this on these people, encourage it by their lack of actions
11 y/o

Can’t wait to hear
“He’s just a baby, a young black boy, you’re racist”… amd we are coming for you next

I can’t wait for some Roof Korean / street justice.

Don’t know if a) there are enough Koreans in San Francisco [in Los Angeles is the largest branch of the Retired Korean Marine Assn., which made up a large part of those covering rooftops], and b) if the crammed together streets are tactically appropriate. I would settle for a reincarnation of the Committee of Vigilance, I believe that they used the phrase Fiat justitia ruat caelum.

You know what I meant…

How about Maccabees with Epicanthic Folds?

Rooftop Maccabees? I’m down with that, with or without the eyelids’.

Remember how fast they dropped the #StopAsianHate when they realized what minority was responsible for nearly all of the ‘hate?’

From Sept. 2021. Bianca Mabute-Louie, a racial justice educator (whatever the F that is other than giving you prominence in Time magazine) “makes the case that fostering anti-Black sentiment or focusing on interracial conflict in this moment takes away from recognizing that racism is a result of white supremacy.

Educating some people just makes them better at deflecting truth.

Or, just running their mouth.

Right, just look at this video, and see if you can pick out all the white people causing racial animus.

Unless they are German.

Race has absolutely nothing to do with it!

Other than it is always whitie’s fault of course!

Other than lack of impulse control and lack of future time orientation.

Obama’s presence in American politics has proven to be the worst thing in US history. The contrivance’s legacy continues.

I wonder who he’s been voting for the last 50 years?

Oh well. It’s San Francisco I’m fresh out of fucks to give.

Yet, they keep voting for their masters

Problems within the demographic need to be addressed by its own members. Until that happens, nothing will change.

I’m glad I don’t live there and I pity those who do.
.

I knew it was one of the ghetto gangsters or a homeless person.

End welfare for those able to work including mothers with children.

My mother had to work after my father went broke. So can the welfare brood mares.

As the LEFT would say #STOPASIANHATE and other slogans because the only hate we say are run by the LEFT.

I find it absolutely disgusting that Chew had the audacity to force Derrick Yearby off of his bike, and then pummeled Yearby’s fists with his face. The hate that Asians bring to safe and secure Democrat neighborhoods is horrifying.

Actually, my bet would be that Chew is a Democrat, has been a Democrat his whole, admitted that he was appointed by Gavin Nuisance…

This has to happen more. Apparently ever day, until Democrats stop blaming Whites for Asian hate.

They’ve next got whites and latinos ahead of them in the achievement ladder, so blacks will have a ways to go in this project.

Greg, call your buddy Chesa Boudin.
He’ll definitely get right on it.
And thank you for “taking one” for your Democratic Party team.

Boudin was sacked two months ago in a recall election. San Francisco DA is now Brooke Jenkins, undoubtedly another leftist otherwise she would not have been appointed by leftist mayor Breed.

They are not “out of time and excuses” until they are out of votes.

Irony alert: a man who was a principle in the destruction of San Franciso and California gets his ass beat by one of his own.

Granting that Chew is a San Francisco Leftist, I note that no description of the assailant was released in the news of the original crime, which has meaning. Further, in today’s news it was announced that a Derrick Yearby, 34, had been arrested and in the police press releases it was clear that they had a description of him which is how they spotted him.

I wonder if the bike the perp was riding was stolen?

And when mamma gave baby boy a Germanic name, spelled as if it referred to a piece of construction equipment, it tells you why there are no photos online of Derrick Yearby.

Greg Chew’s attacker has been arrested: His name is Derrick Yearby.

He was on his way to a fundraiser for Newsom, Feinstein, Padilla, Breed, Jenkins and Pelosi.

The liberal media won’t tell us the ethnicity of Derrick Yearby, the attacker who has been arrested. Neither has Greg Chew told us. If I didn’t know any better, I would have concluded that this means the attacker must be black.

Shockingly, Derrick Yearby turns out to be a 34 year old black person with a criminal record.

So why haven’t they already arrested the minors? The police apparently know their ages and exact birth dates, which suggests they have been identified already.

Yet another Asian, long time D activist attacked by a suspect of no particular description.

I have a solution for the Black Crime Problem:

Any objections to this?

Why didn’t he say it was 2 white guys in MAGA hats?

Because his fellow Asian-Americans know that would have been a lie. They know who is attacking them.