“There’s a longtime effort in the works by activists and ministers to rename it because of its namesake’s role in the slave trade.” 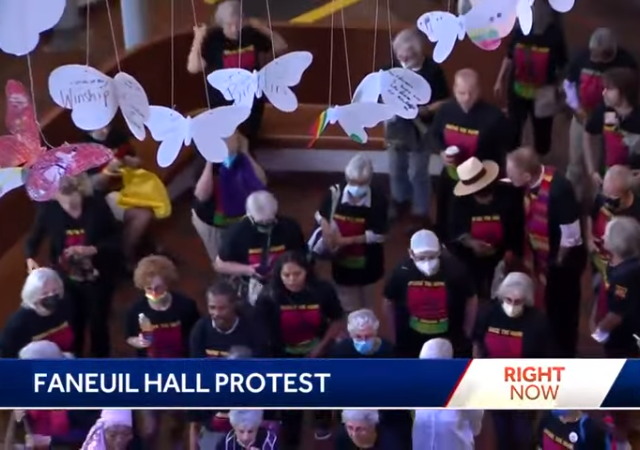 Progressive activists in Massachusetts have decided that Faneuil Hall, a historic institution in the city of Boston, must be renamed because its namesake Peter Faneuil owned slaves.

We are once again reminded of that time a few years ago when the left assured us that their collective madness was reserved for Confederate statues.

I’d also like to take this opportunity to remind everyone that progressives are not demanding that Yale University change its name, despite Elihu Yale’s direct participation in the slave trade.

I do not advocate for Yale changing its name, but a little consistency from the left would be nice. I don’t think any names should be changed or any monuments removed. I believe America’s history is essential to remember, even the sinful aspects.

Faneuil Hall is one of the most famous sites in Boston. There’s a longtime effort in the works by activists and ministers to rename it because of its namesake’s role in the slave trade. Rev. Kevin Peterson sees this fight as a spiritual one.

“On a certain level, racism is a spiritual crisis represented in our nation,” Peterson said. “Peter Faneuil was a racist and a person who represented anti-Blackness. So I’m here passionately trying to help rewrite the story in Boston about how we need to be a multiracial democracy.”

Peterson and more than two dozen people gathered in front of Boston City Hall to once again demand the name change because Peter Faneuil was a known enslaver. The merchant amassed his fortune in part by trafficking and selling human beings, according to the National Park Service. He was complicit in and benefited from a white supremacist system.

Here’s a video of the protest from WCVB News:

People on the left who are gripped by this relatively new mental disorder must be told that America’s history is more important than their feelings.

Douglas MacKinnon, a writer who once worked in the Reagan White House, is originally from Boston and recently wrote at FOX News:

Boston, ‘cradle of the American Revolution,’ wants to cancel another founding father

As a son of Boston, I was saddened, but not remotely shocked, to read that liberal protesters had recently gathered at Faneuil Hall to demand that the mayor and other officials change the name of Faneuil Hall, an historic landmark first built 280 years ago.

Why? Because these liberal protesters have declared the building a symbol of “White supremacy.”

I am not shocked, because I just spent the last year of my life writing a book seeking to protect the founding fathers, July Fourth, and our ever dwindling rights and liberties from the woke, cancel culture mob.

The issue, quite expectedly, comes down to the subject of slavery.

Peter Faneuil, the merchant who designed and built the hall finished in 1742, did in fact own slaves, so therefore, he must be considered pure evil.

To be sure, the practice of slavery is obscene and a crime against humanity. That acknowledged, to view the actions, as well as what might have been in the minds, hearts, and very souls of men born some 300 years ago via the clouded and increasingly biased prism of 2022, is not only problematic, but irresponsible.

This growing list of “White supremacist” labeled founding fathers – be they Presidents Thomas Jefferson and James Madison, or now Peter Faneuil – are being defined, diminished, and dismissed over this issue. Any contributions they made to the creation of the greatest nation on the face of the earth are now deemed irrelevant to the woke protestors.

When dealing with these cancel culture mobs, average Americans must start employing a phrase that is all too familiar to most parents.

The answer is no.

If we just tear down every Racist E. Lee statue, get them all down, THEN we can move on and get back to America again. Nothing else could possibly go wrong if that happens. Promise. No I’m not crossing my fingers behind my back, only a racist tranny hater would say that.

I know the sarcasm was obvious but a lot of squishes actually did decide to go along with tearing down statues for convenience and got us to this point.

I wonder who owns Faneuil Hall.

Only the owner should be able to change the name.

Does the Faneuil family own the place?

The members got on the board by being elite donors.

Remember a board in this town already cancelled Abraham Lincoln.

Faneuil built it as a gift to the City of Boston, so that’s whom it belongs to.

They should just return it to his descendants, if they’re that serious about it.

I would be a lot more accepting to renaming locations to something that is less offensive to their fragilities if the ire and effort were directed at the ones rounding up their own brethren and selling them not only to America but to the entire world.

Why does it appear that all of these losers, um, I mean, protestors, are white? They couldn’t drag a few black people with them?

This appears to be yet another fine display of leftist white guilt, which they insist we all share.

Agreed. Left-wing, lily-white little boys and girls, parading around like quite the civil rights icons. Claiming to support a people who, unbeknownst to them, despise them.
If they want to do something, they should sell, at a steep discount, whatever homes they own to minority buyers… Pennies on the dollar would show their true charity.

Not about guilt. About power.

Hey lunatics, how about Lincoln Hall, after Liz?

Progressive Activists should go chug a gallon of bleach and die.

There is that word “demand” again…

How did we get to accept the tyranny of the minority? There seems to be a trend to make sure that no one is ticked off. Taking that the the limit will result in a mushy society. As this is a public building, why not put its name to a referendum? Let democracy rule.

Why don’t they start being honest? “Lenin Hall”, “Trotsky University”, or “Mengele Medical Center” would be closer to what they want.

Witches, warlocks, and baby privilege, too.

Peter Faneuil was a known enslaver.

No, he was not. He was a slave-owner and a slave-trader, but he never once in his life enslaved anyone.

As George Orwell pointed out, and as we’ve all seen for ourselves, one of the left’s tools for brainwashing people into its ideology is to change the language we use. I first noticed this particular change about 12 or 13 years ago, on a trip to Philadelphia, where I saw a sign claiming that “on this site George Washington enslaved five (or whatever the number was) Africans”. I immediately saw what they were up to.

Washington, like Faneuil, owned slaves. Every one of them was a slave long before Washington or Faneuil ever laid eyes on them. Some were born slaves, and some were enslaved by someone in Africa, but none were enslaved by their subsequent owners. But the attitude the left wants to gaslight us into adopting is that there is no such thing as a slave; therefore every moment you purport to own someone you are enslaving them. That may be the case now, but it wasn’t then. At that time slavery was a real thing, and many people were slaves. Whether you like it or not, that is the fact. So let’s not use the left’s language and thus subconsciously concede their viewpoint.

So two dozen poorly educated, likely unemployable lefty demon-rats are screaming and crying their alligator tears about something that happened 2 1/2 centuries ago?

Go home to your room in mommy’s basement and make her wish she had kept her knees together.

Well, how about renaming Yale University? That’s because Elihu Yale who was the primary benefactor and from whom the University gets its name was a slave trader.

How about Harvard give away a huge chunk of their endowment as it was at least partially created by investing in slave industries?

This is what the left wing base looks like. A bunch adolescent tools fresh out of their high school and college brain washing, and drenched in white guilt. Their only skill set is virtue signalling, to show their friends and the world that they are ‘good people’ unlike non-progressives who of course are all racist.

Durgin Park is closed, and Faneuil Hall is in deep in the Glorious Capital of the People’s Commiewealth of Massachusetts. Two reasons I don’t give a damn what they do..