“…for the good of America, we have to get him out of office.” 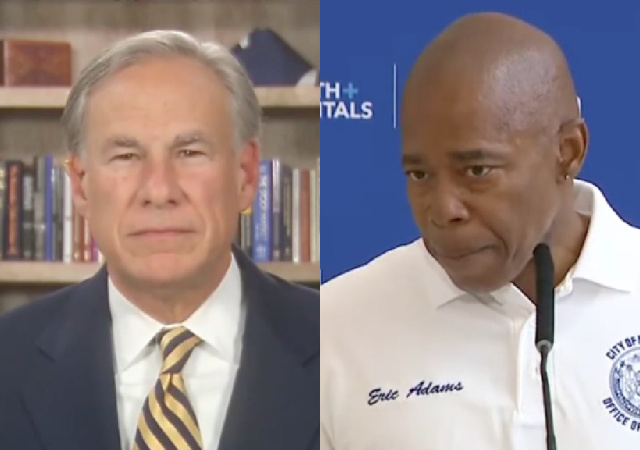 NYC Mayor Adams is still so mad at TX Gov. Greg Abbott for busing illegal immigrants to the city he wants to bus New Yorkers to the state to campaign against the governor:

“I already called all my friends in Texas and told them how to cast their votes,” Adams said during a news conference on Tuesday. “And I am deeply contemplating taking a busload of New Yorkers to go to Texas and do some good old-fashioned door knocking because we have to, for the good of America, we have to get him out of office.”

Eric Adams says he is "deeply contemplating taking a busload of New Yorkers to Texas" to campaign against Greg Abbott in response to him busing 4,000 illegal migrants to his city. pic.twitter.com/0VqmQkREfM

“for the good of America.”

Gee, maybe Adams should have accepted Abbott’s invitation to the border because then he would know Texans are not thrilled about Biden’s immigration policies, or lack there of.

Or maybe Adams should go to Texas to mingle with real Texans and realize that they don’t care what anyone in the country thinks about them nor will they listen to anyone else. Texas is a whole other mindset!

Just for perspective…NYC Mayor Eric Adams is calling for federal help because he says around 4,000 migrants have arrived in NYC in last 3 months since May.

Texas averages 4,000 migrants crossing its border *every single day*, and so far, has sent less than 100 migrants to NYC.

I mean, Adams bragged about keeping NYC a sanctuary city. He toed the Democratic line when it came to immigration and illegal immigration.

Come on in, asylum seekers! Except for NYC and Washington DC.

I mention DC because that’s where Abbott sent the first buses. DC Mayor Muriel Bowser complained about all the illegal immigrants flooding her city.

Adams kept pushing, decrying the treatment of illegal immigrants by Texas and didn’t stop pointing his finger at the states. So Abbott decided to send buses to NYC as well.

“Because of President Biden’s continued refusal to acknowledge the crisis caused by his open border policies, the State of Texas has had to take unprecedented action to keep our communities safe,” said Governor Abbott. “In addition to Washington, D.C., New York City is the ideal destination for these migrants, who can receive the abundance of city services and housing that Mayor Eric Adams has boasted about within the sanctuary city. I hope he follows through on his promise of welcoming all migrants with open arms so that our overrun and overwhelmed border towns can find relief.”

I said in a previous post that I find Adams’ fake show of compassion funny because he is also putting pressure on the Biden administration to help them out with the illegal immigrants.

No need to bus them. They’re already moving there voluntarily because New York sucks so bad with retards like Adams and Hochul running the place.

“Because of high taxes, out of control crime, and poor leadership by the Mayor, people are volunteering to leave New York City by the thousands without the Mayor asking” (quoted)

Come on down! You will be treated with courtesy, given a gift basket and invited to community pig cookins’. For the Muslims among your group we’ll arrange for some baked ham instead.

It would be like the time when Castro emptied his prisons, plus insane asylums, and sent them to Florida.

Nothing gets a Texan more agitated than a bunch of uninvited New Yorkers pounding on their door.

Being hounded by a bunch of leftists with Fran Drescher accents. That’ll work…!

He wants to send New Yorkers to Texas to tell those rednecks how to vote. I’d pay to watch that little adventure!

He’s missing his hat as well as his cattle.

Has anybody written a book yet on “famous black clowns?”
Because it’s time to start one.

Please please please do it and make sure a film crew is streaming it out live. Start in Midland…..

Something like when folks from New York, California, and Massachusetts went into places like rural Alabama and Mississippi to stick their noses where they didn’t belong.

More illegals hanging out at the day work lot in my non-NYC-sized town every day than you’ll ever get on your horror busses.

This Texan to Eric Adams: GFY

Adams might want to brief his progressive evangelizers up on ‘no duty to retreat’, ‘stand your ground’, and ‘castle doctrine’ concepts as they apply to Texas. Otherwise the shock of freedom alone might eliminate the useless idiots.

Oh, and make sure their insurance and wills are up to date,

He wants to send NYers to Texas in retaliation?

Proving for the millionth time that lefties can dish it out but can’t take when a dishee won’t take their guff.

Why do I imagine the people bused to TX for their first experience of real liberty looking around and saying things like “you can buy a house like that for how much?” and “people actually smile on the streets and say hello”.

The issue would be how many managed to “miss” the bus back to NYC.

And there is decent Mexican food too!

Problem solved. Send NYers to TX. They like it and stay. Fill the empty busses with illegals and send them back to NYC at their expense.

People from NYC think they have friends outside of NYC…really everyone wants them to shut up and stay in their little cesspool.

I’m sure NYC “campaigners” will do a lot of grass roots movement trying to tell Texans how much smarter and better they are because they are from New Yawk.

They don’t have to stay in their cesspool. They can go to other cesspools like Boston, Chicago and California. They just need to stay away from everywhere else. Even dogs can be trained to stay off the furniture.

Inasmuch as Texas is about 30% or larger than New York nowadays, this would backfire BIGTIME. New York isn’t what it what it once was. Please do it.

“I already called all my friends in Texas and told them how to cast their votes,”

Wow! He called both of them.

Any New Yorkers he sends may not want to return.

And one of them was going to vote Republican… until Adams called him, and he remembered that oh yeah, he’d been a Democrat all his life, which was the only reason he ever hung out with Adams.

Adams says he wants everybody in Texas to send him their photograph so he will know which houses to send his campaign workers to.

It’s all for show

I double dare him to bus campaigners to Texas using public funds.

This is the kind of thing we could more than likely get a NY courtroom to rule is illegal. You are not permitted to use state funds for your political campaign or your parties priorities which by any reckoning this very clearly is.

I don’t think you could find a busload of New Yorkers willing to go to Texas to get their asses kicked.

But you could probably fill up 400 RV parks with carpetbaggers from AZ, NV, WY, UT, MT, ID, etc. who are willing and eager to go to Texas to help their Texan brothers and sisters kick ’em.

How much is the per diem for these NY campaign workers to walk door to door in Texas? If it’s high enough, I’ll travel to NY to get on a bus to Texas.

The polls are fixed in sanctuary cities. The excess voters are unneeded, unwanted, a burden.

Proving, yet again, that the left simply cannot meme

All they have to do is pass that closed gate and NO TRESPASSING sign…..

Ooooh, now that will be effective. LOL

arrest the troublemakers for disturbing the peace, and send them back on a bus overly full of illegal aliens

I don’t think that it has occurred to Mayor Adams that Texas has election security laws privileging citizens of Texas while NYC allows non-citizens to vote. (He can’t send the felons as they could not vote.)

And any liberal voters leaving NYC to influence the growing red-hued state of Texas will be lost to defend the unelected Gov Kathy Hochul from Lee Zeldin.

All in all, the country wins.

The mayor might get in some trouble for this … unless he declares this to the FEC as an in-kind contribution to the Abbott campaign.

He should absolutely do that. Because Texans just love being told how to vote by NYers. Adams is such a fool.

Oh by all means, do send a bunch of Manhattanites to Texas to go walking door-to-door. In August. In Texas.

Include a mop, because they’re going to melt.

Come on down and bring lots of money. Bars and barbeques need the business.

Maybe Adams needs to haul his backside to Tx to see what the policies he promoted have caused.

I bet Texas can send a lot more willing illegal aliens than Adams can send willing New Yorkers. Shall we start a contest?

Question might be how many of those New Yorkers decide they want to defect after seeing what Texas is accomplishing in this S&!+show economy? Still going to have to say no thanks

but watching those Yankees doorknock in 106 degrees should be lots of fun!

Adams, Are you sure you want to door knock in Texas?

“Texas law allows a lawful owner of land or tangible property to use force to protect his property. The property owner is justified in using force when he reasonably believes the force is immediately necessary to prevent or terminate the other’s trespass on his land or unlawful interference with his property.”

The problem wouldn’t be sending them. It would be trying to get them to come back.

“I already called all my friends in Texas and told them how to cast their votes,” Adams

Next, they will, they have, Occupy cities, Antifa businesses, SS[B]LM neighborhoods, and select committees to bray about witches, warlocks, and babies.

It costs just $200 for a trip on Amtrak from Austin TX to Wash. DC. For one-million you could send 5k illegals to DC, or NYC, or Biden’s home state of DE. On the grand scheme of things, one-million is not a lot of money.