“…will not invite speakers that have expressed and continued to hold views or host/sponsor/promote events in support of Zionism, the apartheid state of Israel, and the occupation of Palestine.” 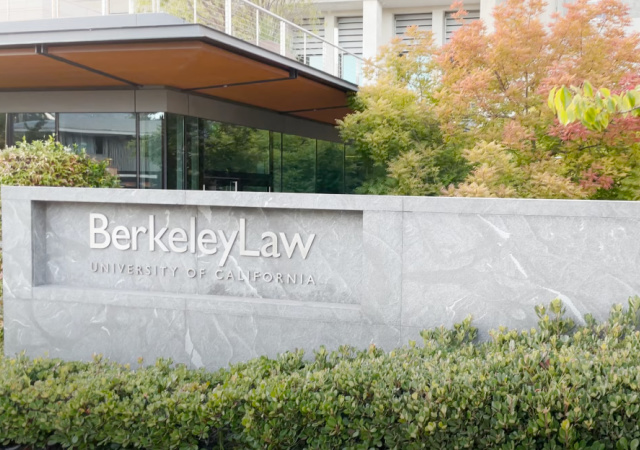 Nine law student organizations at the University of California, Berkeley Law School face backlash for pledging not to invite any Zionist or pro-Israel speakers.

The Berkeley Law Students for Justice in Palestine announced on Instagram:

BDS VICTORY!! LSJP is so excited to announce that multiple student affinity groups and clubs at Berkeley Law have adopted a pro-Palestine bylaw divesting all funds from institutions and companies complicit in the occupation of Palestine, and banning future use of funds towards such companies! LSJP is calling ALL student organizations at Berkeley Law to take an anti-racist and anti-settler colonial stand and adopt the bylaw into their constitutions ASAP! If you have any questions about the bylaw, the language, or the process of adopting it please feel free to reach out to [email protected]!!

I will upload all the pictures if the group makes the page private. The bylaw states:

The [insert organization name] is committed to providing a supportive community space for all indigenous peoples globally, including movements for Palestinian liberation. In the rejection of colonialism, imperialism, and other types of oppression, [insert organization name] is dedicated to wholly boycotting, sanctioning, and divesting funds from institutions, organizations, companies, and any entity that participated in or is directly/indirectly complicit in the occupation of the Palestinian territories and/or supports the actions of the apartheid state of Israel. Futhermore, in the interest of protecting the safety and welfare of Palestinian students on campus, [insert organization name] will not invite speakers that have expressed and continued to hold views or host/sponsor/promote events in support of Zionism, the apartheid state of Israel, and the occupation of Palestine. While Law Students Justice for Palestine respects the approach of each individual organization in their implementation of this provision, suggested strategies can include publicly stipulating the organization’s position of anti-racism and anti-settler colonialism to speakers, ensuring that proposals for speakers emphasize the organization’s desire for equality and inclusion, and informing speakers of the event’s goals and mission values. To ensure that solidarity is practiced both in theory and in practice, [insert organization name] Board Members agree to participate in a “Palestine 101′ training held by Law Students Justice for Palestine to learn ways to create a safe and inclusive space for Palestinian students and students that are in support of the liberation of Palestine, as well as engaging in the BDS movement in the principled manner Palestinians are asking for.

So the bylaw goes further than BDS or not having Zionist and pro-Israel speakers. A board member from the student organization must attend a training program. 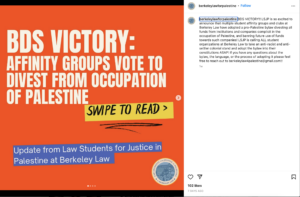 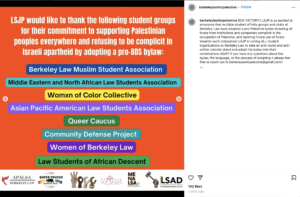 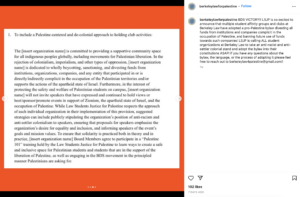 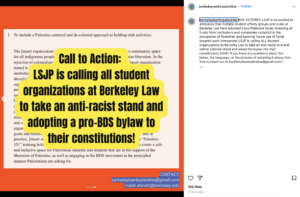 Only nine out of the 100 law student organizations adopted the bylaw (including the Law Students for Justice in Palestine):

2/11 @AMCHAInitiative Director:“This is part of the anti-normalization element of BDS, which seeks to exclude, marginalize & demonize Jewish & Zionist identity on campus, & is one of the reasons that BDS inspires the targeting of Jewish students for harm.”https://t.co/jsBWIPC1rt

Berkeley Law Dean Erwin Chemerinsky finds the bylaw “troubling” because it excludes “a particular viewpoint from being expressed.”

But some students have come to me quite upset about this statement and there are aspects of the statement that are distressing in terms of our principles of community. For example, it states: “Furthermore, in the interest of protecting the safety and welfare of Palestinian students on campus,” student organizations signing the statement “will not invite speakers that have expressed and continued to hold views or host/sponsor/promote events in support of Zionism, the apartheid state of Israel, and the occupation of Palestine.”

It is troubling to broadly exclude a particular viewpoint from being expressed. Indeed, taken literally, this would mean that I could not be invited to speak because I support the existence of Israel, though I condemn many of its policies. Chancellor Carol Christ has also spoken about how the boycott, divest, and sanction movement “poses a direct and serious threat to the academic freedom of our students and faculty, as well as the unfettered exchange of ideas and perspectives on our campus, including debate and discourse regarding conflicts in the Middle East.’”

Then again, in October 2020, Chemerinsky threw a hissy fit when former President Donald Trump swore in now-Justice Amy Coney Barrett. He advocated for Democrats to “pack the court.”

I do not understand the hatred for Jews and Israel. I doubt I will never understand why Jews have been hated since the beginning.

Telling Jews that they are not welcome in a space as Zionists is the same as telling them that they are not welcome as Jews. In this sense, too, the BDS position is another camouflage of the ancient hatred similar to the antisemitism of the Enlightenment period, when the Revolutionary French Assembly was told: “[t]he Jews should be denied everything as a nation, but granted everything as individuals… if they do not want this, they must inform us and we shall then be compelled to expel them.”

It is intolerable that in 2022, the Jewish community at one of America’s top law schools should be intimidated and held hostage in such a manner. While the BDS forces attempt to label their attempt to isolate Jewish students as “anti-racism,” it is really just racism, plain and simple.

Tammi Rossman-Benjamin, director of the AMCHA Initiative, asked if a Jewish student could “feel comfortable now in the Queer Caucus or Women of Berkeley Law,” two of the nine groups that accepted the bylaw.

UC Berkeley, in general, is a leftist haven. We have plenty of posts about the activities and money the school spends in the name of “diversity.”

Just lovin this coming from the party of equity and tolerance. And look at the names of the groups protesting 🤣🤣🤣

Isn’t Jordan the country created for the Mideastern Muslims?

Just another reason why the UCB alumni “donation” requests are placed in the trash at our house.

Bigots, pretending to be the opposite. So typical. It’s for show, to keep up appearances. They could care less.

Why don’t they just fly Nazi flags and admit to being nakedly anti-Semitic? The pretend distinction between JewsIsraelisPalestinians and Arab neo-Palestinians aka Gazans and West Bankers is absurd. Zionism means the original inhabitants of Palestine i.e. the Jews, getting their land back. I guess Berkeley law students would rather see the ovens back?

This is anti Semitism not merely troubling

“It is troubling to broadly exclude a particular viewpoint from being expressed. Indeed, taken literally, this would mean that I could not be invited to speak because I support the existence of Israel, though I condemn many of its policies.”
———

Notice how Chemerinsky feels obligated/pressured to toss in an obligatory criticism of Israel in his statement, in order to appease the rabid Dhimmi-crat Jew-haters and Muslim supremacists/terrorists at Berkeley.

This is where the vile Dhimmi-crats have brought us with their decades-old, vicious, dishonest and evil slandering of Israel as an alleged “apartheid state,” their efforts to deny and to erase Jews’ historical ties to the middle east (ties which predate the supremacist ideology of “Submission’s” founding by millennia, let’s observe), and, their blind propagation of, and, deference towards, manifestly contrived propaganda mythologies of alleged Arab Muslim, so-called “Palestinian” victimhood.

Closed-minded, small people, spoiled brats. Instead of listening to all points of view and deciding after discussion & discernment, these future lawyers, politicians & judges stop their ears, harden their hearts and blind their own eyes.

Has their uniform changed, or is it still brown shirts and jack boots?