Tiffany Cross: “At this point, we need to have serious conversations around preparing for actual violence. People keep saying a Civil War is coming. I would say the Civil War is here.” 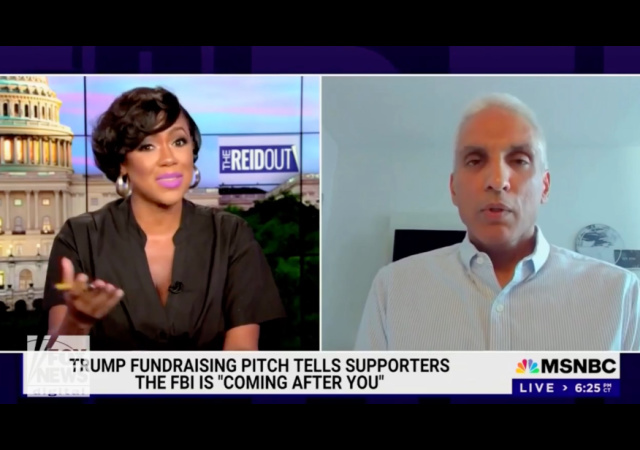 This week, Tiffany Cross, filling in for Joy Reid on MSNBC’s “The ReidOut,” suggested that a civil war is ALREADY happening in America.

In an interview with former NSC senior director for counterterrorism Javed Ali, Cross pushed back against Ali when he suggested we should bring down the temperature.

She added, “The train has left the station. There is no dealing with the rhetoric. At this point, we need to have serious conversations around preparing for actual violence. People keep saying a Civil War is coming. I would say the Civil War is here. And I don’t mean to be hyperbolic. We can look at what has happened in the past week alone since all this has happened. We’ve had two people try to declare war with FBI field offices. At this point, I don’t think we’re going to pack up our bags and go home and sing kumbaya.”

Earlier in the week, she also said, “We have to stop separating the GOP and right-wing extremists.”

MSNBC host: 'We have to stop separating the GOP and right-wing extremists' https://t.co/kBgqB3IBaI

They don’t know what they are playing at.
They are children who found a box of blasting caps.

Not even the Hitler Youth was as deranged as these useful idiots.

They are the only ones rioting, looting, shooting, attempting assassinations, beating innocent civilians going about their business and more. So only one side of the “civil war” is engaged in it.

This is more than projection. This is an announcement that they believe they’re going to have to start killing conservatives in lot batches to do what they want to do.

They’re preparing the “you made me do it” excuse before things start.

I came to this conclusion years ago.

Welcome to the club, MSBNC, even though you pretend the destruction your side began has never existed.

I don’t think there is another option other than submission into slavery.

It’s galling and contemptible how the vile Dumb-o-crats have done everything in their power to brazenly and unabashedly foment and support civil unrest and lawlessness, and, to undermine and erode national pride, patriotism, unity and civic cohesion since at least the 1960’s, running up to their contemporary unabashed support and enabling of the 2020 Dumb-o-crat riots, insurrection and murders committed by the Party’s goose-stepping, terrorist-thug cadres in “Anti-fa” and “Black Lives Matter,” and, their perennial and corrosive racial demagoguery and identity tribalism.

Yet, now, these hypocrites possess the incredible gall to assume the posture of self-perceived moral superiority, lecturing conservatives about how it is they who allegedly have brought the country to “civil war.”

Now? They have always had the gall to assume moral superiority. They are the living embodiment of projection. They are trying to push us into the direct confrontation. They are building the civilian armed force, the one that Obama wanted, in the form new armed IRS agents. New armed agents in other bureaucracies that did not normally have armed agents. Unlike the military and even the federal law enforcement the agencies the agencies are almost 100% democrat aligned.

When your assumed leader is a well-known pedophile like Joe Biden, you don’t get to claim any morality, much less moral superiority. I happily point this out to any leftist that even tries around me.

Sure; by “now,” I was referring specifically to the Dumb-o-crats’ unhinged “civil war” rhetoric. That Leftists have always possessed a smug sense of self-perceived (and, fallacious) sense of moral superiority is a given.

When you rip up the Constitution of the United States, that’s what happens…doesn’t take a rocket scientist, lady…

Pelosi showed them how to do it and on live tv.

Bullies call you a bully when they are afraid you will fight back.

With any luck semi literate Tiffany will be the first victim.

People are preparing for violence from the left.

That’s why the left is playing their favorite game: projecting, and stirring up their street goons and base of miserable, single women over 25.

You have absolutely no clue what you are playing at while a whole lot of us have been to real war and know it is anything but civil. I guarantee you won’t like it if/when the gloves come off.

So just remember you incited it.

They’re clearly oblivious to the fact that whether or not it’s here yet, they’d lose that Civil War. Badly.

I don’t know if that will be the case. Remember during Obama how corporations were given discount penalties if they “donated” there required payments to “approved” local groups. How about the hundreds of millions of dollars in BLM hands? That’s a lot of money to develop a following… an army in waiting that has proven the ease of burning and looting during 2020 riots. That money can equip a lot of people to do anything in the way of “direct action”. They have already shown that there can be coordination and communication to achieve their actions.

The FJ Biden admin has the desire to back up and lend support to ultra-leftists… covertly if need be. That allows mobilization and direction. At the local level… what happens? How does one break martial law in that circumstance? There are some allied states that would have common cause, but this isn’t North-South but Rwanda…not the English Civil War.

Then we have foreign interests…. China to “stabilize” the West Coast and the EU/UN for the East Coast. As for Russia? Well you can see it from her. The FJB side can create real crises… as in food shortages, to gain control. Just my ramblings.

Oh, they’d control the cities. And wouldn’t dare venture out. Until they started starving. Then they’d be more of a mob then an organized army.

Even today the Army isn’t going to move out of their barracks to suppress uprisings once they start. The FOGOS may be totally on board with the left. The ranks that actually control the guns aren’t. And let’s take a particular look at Fort Hood. All the people there are on 2nd tour or more are TEXANs. They may not be born Texans, but they asked to be assigned there, and want to be in Texas. They’re definitely not moving out.

I live in Texas. It’s not as conservative as you think or hope for.
Think uvalde…Never wooI have thought a tough Hispanic town would let that happen.

“…China to “stabilize” the West Coast and the EU/UN for the East Coast.”

Neither is even remotely possible.

They got away with looting and rioting because there was no pushback. Start deploying snipers who play for keeps, watch those rioters crawl into the nearest hole.

Preparing for actual violence? Oh bless your heart Tiffy.. where were you during 2020? The rest of us have been preparing for left wing violence. You guys deploy violent behavior at the slightest pretext and if you bring it out of your leftist cities, you’ll see just how prepared the rest of the country has become.

Sounds like a lame virtual declaration of war to me.

They can’t even do that right. I doubt anyone on the right is foolish or dumb enough to take the bait.

More misplaced wishful thinking from another heavily indoctrinated low IQ fanatical lefty ignorant of history and what civil war is really like.

True that. Though we have a ding bats on the right as well who seem to equate playing call of duty with combat experience. As well as those who literally have no frame of reference, not even an academic one.

Bottom line is a civil war is something to be avoided at almost any cost. Once it begins there isn’t a quick off switch; violence begets violence. People will seek retribution for slights and issues that have nothing to do with larger issues. Did someone PO the neighbors three sorts down a couple years ago? Better kiss and make up before anarchy breaks out and they have an opportunity to accompany their motive. Study Yugoslavia, lots of very well written, informative accounts of how that played out.

The Cold Civil War with leftist political violence is the closest we will ever get thanks to a new civil war.

With modern technology a second American Civil War would at least look like the Russian Civil War and probably much worst.

Standard progressive tactics: accuse the enemy of what you are guilty of.

I’ve been saying for years this is what the left really wants. To provoke a hot war to serve as an excuse to trample civil liberties.

“At this point, I don’t think we’re going to pack up our bags and go home and sing kumbaya.”

You lost the option to sing Kumbaya when you burned our cities, blinded our cops, purged us from your websites, put us under house arrest, killed our small businesses, stole our elections, threw our demonstrators in a gulag, persecuted our president, shut off our fuel, decimated our savings, outlawed our firearms, and put our kids at risk from predators… and told us we deserved ALL of it, because we were racists.

No, the time for Kumbaya is long lost… but if you think you have the capacity to learn a song that has more than five words in the lyrics, I’d suggest you start boning up on “Tom Dooley.”

It is a bit rich that the folks who kicked anyone who disagreed with them out of the room, off the job, off social media and into exile from polite society are suggesting that things may have gone too far.

There are only two ways to settle issues; talk them out or fight them out. Removing the ability to talk them out leaves little option. Most of us would much rather be able to talk these issue out, if only the d/prog and their allies would allow that to happen.

Damn fine one, ain’t it!

The Left has been saying for decades how much they hate us, consider us enemies of humanity, wish to enslave us, and how anyone not a Leftist cannot be redeemed but only killed. OK, we believe that is what you intend to do. Really believe. And return the equivalent feelings. Now what.

Oh, and saying “Just Kidding!” is not going to work.

But cocktali GOPe “conservatives” are waiting in the wings to destroy whatever gains we make in the election. Just ask McConnell, McCarthy and that idiot GOP Chairwoman, Ronna Romney McDaniel.

Bless her heart. If the civil war were on, she wouldn’t need to tell people. Everyone would know.

As dumb as Reid is, she doesn’t have anything to worry about.

Something tells me that Joy and Tiffany have jobs only for them to fill a token quota? Lord knows intellect wasn’t part of the hiring process.

Civil contempt is here. Were it a civil war, CNN, Msn and the rest would already be gone, first casualties behind NPR and PBS.

That’s true, nobody would dare drive to work at these places because doing so could prove fatal.

A Monkey Pox on her head.

Monkey Pox would not be a problem if people whould use orrfices for their intended purposes.