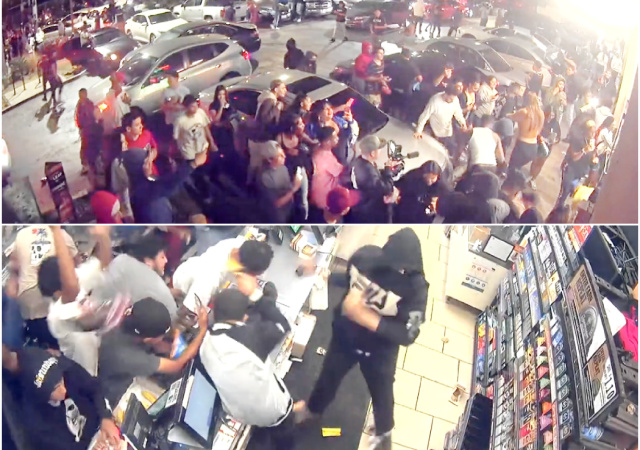 Street takeovers have become popular in Los Angeles this summer. From KTLA:

Takeovers typically involve “flash mobs” of hundreds of spectators and several cars that arrive in a coordinated manner at specific intersections, or even interstates, and blocking traffic to speed and show off dangerous stunts like drifting.

As vehicles turn and screech through intersections, spinning dangerously close to cheering crowds, the stunts are often filmed by onlookers and posted on social media — which police say generates even more interest in the illegal activity.

Illegal street racing has always been part of L.A.’s car culture, but police say the practice has changed over the years. KTLA spoke with Los Angeles Police Department traffic group Cmdr. Al Pasos about the issue.

The street takeovers became wilder and crazier as the summer dragged on. Here are a few incidents:

On August 15 around 12:40am a street takeover initiated at Figueroa and El Segundo. The spectators then formed a ‘flash mob’ of looters and rushed a nearby 7-Eleven.

The LAPD, businesses, and homeowners have had enough:

“We really want to stop this from becoming a new trend where they think they can show up and take over a street, freeway or any part of the city,” said LAPD Detective Ryan Moreno during a press conference Thursday.

The police department announced new enforcement measures, anyone participating or attending a street takeover will have their vehicle impounded for up to 30 days.

Det. Moreno said on a typical weekend the department would impound five to ten cars, but that number is sure to go up in the coming days if takeovers continue to occur.

CBS News LA reporter Laurie Perez witnessed two street takeovers in south LA. One had 500 spectators, with many “standing dangerously close to cars and trucks that were doing donuts and dangerous tricks with their cars.”

The closeness of spectators “intimidated” some of the drivers. But the drivers weren’t worried about the spectators. They were “afraid of any consequences because they had a street takeover at the exact same spot” the following weekend.

I have yet to see it happen in Columbia, SC but the street racing and aggressive driving is off the charts.
Interstate 77 sounds like the Southern 500.

And now the store is going to close permanently and the race baiters and poverty pimps will whine about it being in a ‘food desert’.

There’s no justice when people are being treated inequitably! Food Deserts are Systemic Racism! No Justice, No Peace!

And so it goes. The snowball gets bigger as it accelerates

When the Hair Extension Desert is a reality there will be REAL trouble.

Will Smith will slap you if you make any more jokes about his wife.

It’s pronounced “WILL SMIFF.” What are you–a WHItE Supremacist???

Marco: it’s like when I read a story mentioning this or that being “axed” from a budget or something, I ask my self, what questions do they axe it?

It’s long past time to tell the Reverends tribal chieftains that there will be arrests, vehicle confiscation, and looters shot on sight. And the threatened riots will be put down HARD.

Too bad Gascon is the monkey wrench in the works of such a plan.

“MONKEY” wrench is a RACIST TOOL. (Sort of like OBAMA.) R U a white supreme pizza?

I chose the word intentionally.

Notice the hooded instigators. Are they paid to instigate? Very probable they are.

Don’t base it on hoods. “Hoodies” are popular garments in the vibrancy community. It is both a fashion, and good for camera-dodging.

On that last one, with cameras everywhere, I almost don’t blame them.

I may be elderly but am still a big kid at heart. I often will look at one, stick my thumbs in my ears, stick out my tongue and wiggle my fingers at them.

The people in the hoods are the leaders of the riot, and they’re the only ones taking care to cover their faces. The other idiots don’t.

El Segundo. No doubt there is a drag queen using the stage name Elsa Gundo.

Figueroa and El Segundo… I think that is Maxine Waters’s district.

Los Angeles has had enough!
(wait for laughter)

And the Great but not Late George Gascon makes his move. Charges up to and including jay walking and parking violation expected.

LA is cracking down? Really? Are you sure?

Impound for 30 days? How about auction them to pay for increased costs? Search the vehicle for evidence of other crimes, get a warrant for their residence, arrest everyone’s ass, run them for outstanding warrants, run their prints/ID for unsolved crimes and see what else turns up.

Auction them off, or, feed them to one of the crusher / shredders at the Luria Brothers yard east of there.

And, make the vehicle owner watch.

“We really want to stop this from becoming a new trend where they think they can show up and take over a street, freeway or any part of the city”

Because the next thing you know, you end up with a CHAZ.
Or a CHOP.
Or maybe it’s in the other order.

Depends on if it is Bono or Suey.

“The police department announced new enforcement measures, anyone participating or attending a street takeover will have their vehicle impounded for up to 30 days.”

I have a better idea. Return the car in 30 days but the car is a small metal cube and you give them a bill for the work.

I have posted a variation on that theme above. Great minds…

OMG OMG! Look at all those WHITE SUPREMACISTS! The greatest threat our country faces!!!!!

You’re beating that theme to death…

This phenomenon was anticipated by the great Stanley Kubrick decades ago:

They will be out by nightfall with little or no charges and buy the cars back at auction, if you manage to seize them that is.

Gascon won’t prosecute them, so why waste time?

Did they exceed the bag limit? Social progress good and hard with forward-looking hopes and dreams.

Are they going to crack down when a mosque does it? That’s a very popular thing in Europe.

Most major cities of America are nothing but crime-ridden wastelands. Nothing is done to limit the Soros abuse to citizens and for the life of me, I can’t believe they aren’t identified as organized crime. Soros kicks in seed money but soon the NGOs they create have local or regional government paying the freight.

There is good reason why Hungary threw him out of the country……but we just can’t seem to get a handle on him???