End Ben & Jerry’s Occupation! How come it doesn’t have the now-fashionable “Land Acknowlegment” on its cartons. 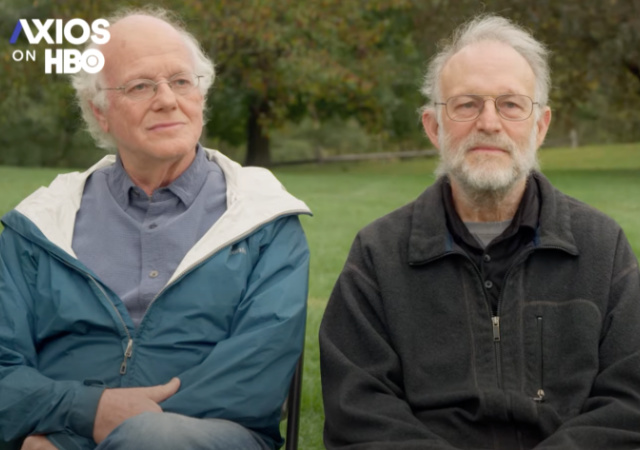 A letter signed by a thousand Israeli students accuses BDS-supporter Ben & Jerry’s of hypocrisy in illegally occupying Vermont land that belongs to Abenaki Indians while self-righteously refusing to do business in “occupied Palestinian territory.”

Israeli students claim that ice cream maker Ben & Jerry’s is “illegally” occupying land in Vermont that once belonged to a Abenaki native American tribe and should practice what it preaches and immediately evacuate the properties.https://t.co/XyK3gmBrUk

Ben & Jerry’s will end sales of our ice cream in the Occupied Palestinian Territory. Read our full statement: https://t.co/2mGWYGN4GA pic.twitter.com/kFeu7aXOf3

The letter, signed by more than a thousand Israeli students and academics affiliated with Students for Justice in America and supported by Shurat HaDin – Israel Law Center, accused Ben & Jerry’s of operating their Vermont factory on lands belonging to the Abenaki people. LIF reached out to Shurat HaDin requesting a copy of the letter, but did not receive a response. As reported in the New York Post, the letter included the following:

“We have concluded that your company’s occupation of the Abenaki lands is illegal and we believe it is wholly inconsistent with the stated values that Ben & Jerry’s purports to maintain. Ironically, in July of the last year you announced that you would discontinue the sale of your products in Israel because you object to the Jewish State allegedly occupying Palestinian territories,” the letter to B&J’s chairperson, Anuradha Mittal said…

“Ben and Jerry’s has never even offered to provide compensation to this indigenous nation in Vermont,” the letter from the students’ group, which is a counterpoint to Students for Justice in Palestine, which promotes the BDS movement against Israel, said.

“Justice, morality and boycotts are not just slogans and antisemitic weapons for your food company to point at the Jewish community in Israel. Justice and morality must begin at home.”

The students demanded that B&J immediately evacuate the properties “it occupies” in South Burlington, Waterbury and Saint Albans and “return them to the Abenaki people”, adding, “your company has no right to these stolen territories.”

As the letter states, the land where Ben & Jerry’s is based used to belong to the Abenaki, a Native American tribe that lived throughout what are now New England and New Brunswick at the time European colonists first arrived in New England. The tribe’s traditional homeland included Vermont, where Ben & Jerry’s headquarters is located. After having been welcomed by them (like the Abenaki chief Samoset, who welcomed the Pilgrims), English colonists fought several wars with the Abenaki and eventually forced the survivors to settle in what was then French Quebec.

We have a progressive, nonpartisan social mission that seeks to meet human needs and eliminate injustices in our local, national, and international communities by integrating these concerns in our day-to-day business activities…

Despite Ben & Jerry’s pretensions about its “progressivism” and “social mission,” its website includes no land acknowledgement accepting the problematic way European colonies gained control of the land from Native Americans. Such statements have become de rigueur among the politically correct. 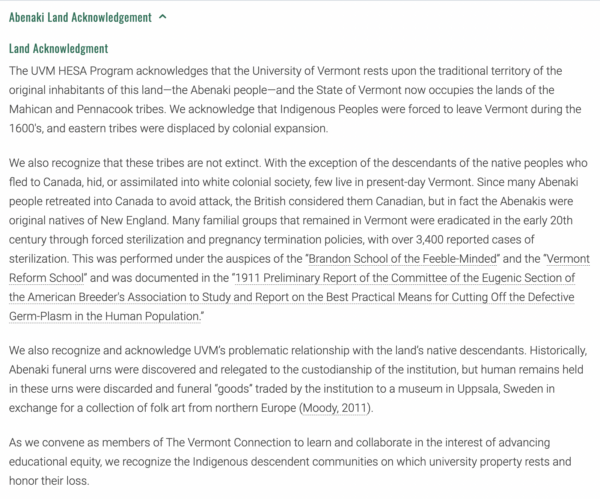 For example, the University of Vermont, the campus of which is located about three miles away from Ben & Jerry’s headquarters in Burlington, Vermont, has a Land Acknowledgment on its website that states the following:

The UVM HESA Program acknowledges that the University of Vermont rests upon the traditional territory of the original inhabitants of this land – the Abenaki people – and the State of Vermont now occupies the lands of the Mahican and Pennacook tribes. We acknowledge that Indigenous Peoples were forced to leave Vermont during the 1600’s, and eastern tribes were displaced by colonial expansion.

We also recognize that these tribes are not extinct. With the exception of the descendants of the native peoples who fled to Canada, hid, or assimilated into white colonial society, few live in present-day Vermont. Since many Abenaki people retreated into Canada to avoid attack, the British considered them Canadian, but in fact the Abenakis were original natives of New England. Many familial groups that remained in Vermont were eradicated in the early 20th century through forced sterilization and pregnancy termination policies, with over 3,400 reported cases of sterilization. This was performed under the auspices of the “Brandon School of the Feeble-Minded” and the “Vermont Reform School” and was documented in the “1911 Preliminary Report of the Committee of the Eugenic Section of the American Breeder’s Association to Study and Report on the Best Practical Means for Cutting Off the Defective Germ-Plasm in the Human Population.”

We also recognize and acknowledge UVM’s problematic relationship with the land’s native descendants. Historically, Abenaki funeral urns were discovered and relegated to the custodianship of the institution, but human remains held in these urns were discarded and funeral “goods” traded by the institution to a museum in Uppsala, Sweden in exchange for a collection of folk art from northern Europe (Moody, 2011).

As we convene as members of The Vermont Connection to learn and collaborate in the interest of advancing educational equity, we recognize the Indigenous descendent communities on which university property rests and honor their loss.

Ben & Jerry’s has not issued a public statement about the letter, or responded to LIF’s inquiry about it.

Shurat HaDin – Israel Law Center has provided LIF with a copy of the letter sent to Ben & Jerry’s. You can see it here. The letter, signed by 1,000 Israeli students and academics, was sent on behalf of a group called Students for Justice in America – an Israeli answer to the American group Students for Justice in Palestine. Ben & Jerry’s still hasn’t publicly responded to the letter. Perhaps they are realizing, People who live in glass houses shouldn’t throw stones. 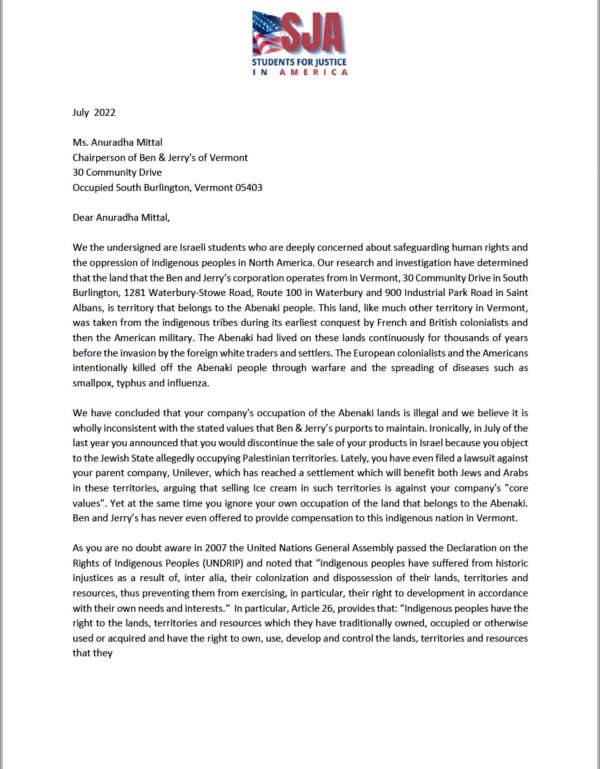 Mr. Zinger should slap his own label on the ice cream and keep selling it.

He could have done that, but then he’d miss out on the sales brought in by the brand’s cachet.

As it is, he now permanently owns the rights to the brand in Israel, apparently with the proviso that he can’t spell the name in English letters. That shouldn’t be a problem; locals can read the Hebrew letters just fine, and even tourists would recognize the distinctive labels and art style, to which he now owns the local rights. The B&J board is upset about this, but even in the unlikely event that they win their case, I don’t think that would reverse the sale; I think they would just be owed damages from Unilever.

It’s not difficult to make excellent ice cream. They can make their own and burnish the brand with B&J barbs in the flavors. Ben & Cherry. B&J Akinaki Apple Crisp…

“Brandon School Of The Feeble Minded”

I know. Just a coincidence

“Brandon School Of The Feeble Minded”

Land acknowledgments are so lame. Might as well say: “Here’s how much we care and how little we are going to do about it.”

Canada has a much more complex relationship with its remaining natives, which means we handwring about this far more than you do, to the point it’s become farce. I’ve taken to shouting out “but you’re not going to give it back, are you?” after each land acknowledgement. The subsequent chuckling has been getting louder and more widespread over time.

“How come it doesn’t have the now-fashionable “Land Acknowlegement” on its cartons?”

Because the entire North American stock of two-point type is being bogarted by Dr. Bronner.

Oddly, the Abenakis do not now or nor did they ever establish “refugee camps” for themselves where they insist on being stateless and demand the rest of the world subsidize their existence.

They just got on with it.

I hate to break it to you, but you’ve just described a native reservation in Canada.

They look like perverts, to me. Lock up the children until they’re gone.

The problem I have with this sort of stunt is that it appears to concede to the “Palestinians” the claim that they are the indigenous people and the Israelis are the white colonialist settlers. It adopts the view that indigenous land rights have been irretrievably lost, and the most they can expect are these ridiculous “acknowledgements”.

But the correct zionist position is the exact opposite. Zionism champions indigenous land rights, because it is the movement of an indigenous people returning to its native land and reclaiming it from the Arab colonists and settlers. Israel is like if a whole lot of Indians were to go back up the Trail of Tears to Tennessee and Georgia, buy up a bunch of land, and reestablish themselves there. Who could argue with that? And naturally if they were attacked they’d have to defend themselves, as Israel has done. Again, who could art

Two shmoos with little to do.