Iranian newspaper Kayhan: “Bravo to brave Muslim who gave the apostate his due.” 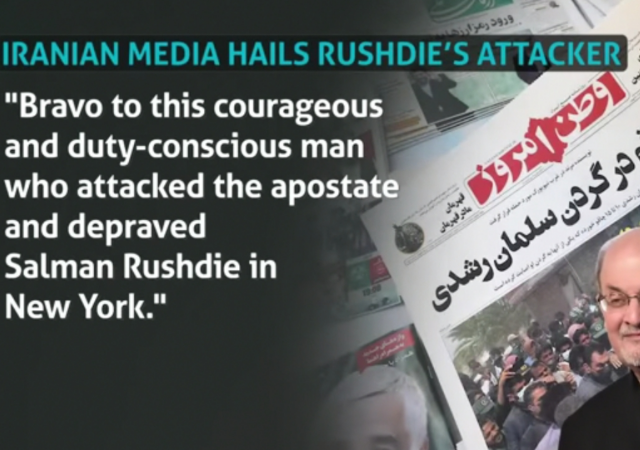 Iranian state-controlled media is celebrating Friday’s stabbing of author Salman Rushdie, who lived under the threat of a death fatwa issued by Iran’s Ayatollah Ruhollah Khomeini in 1989. The 75 year-old Indian-born novelist was stabbed twice, in the abdomen and the neck, on the stage at a literary event in western New York.

Rushdie’s agent said he’s likely lost one of his eyes so that’s the image that ended up on the front page of Jam-e Jam which is published by Islamic Republic of Iran Broadcasting. pic.twitter.com/XJEFF3LHLu

The Iranian newspaper Khorasan featured an image of Rushdie being carried on a stretcher, with the headline saying: “Satan on the path to hell,” — a reference to author’s 1988 novel The Satanic Verses, which triggered angry protests by Muslims across the world for its portrayal of prophet Mohammad.

"Supreme Guide" Khamenei's Kayhan daily hails the attack on novelist #SalmanRushdie as fulfillment of Khomeini's 1988 murder fatwa. It says:Bravo to brave Muslim who gave the apostate his due.
Few years before the fatwa Rushdie received Islamic Republic's highest literary award.

[T]he hardline Kayhan newspaper, whose editor-in-chief is appointed by Iran’s Supreme Leader Ali Khamenei, wrote: “A thousand bravos … to the brave and dutiful person who attacked the apostate and evil Salman Rushdie in New York,” adding, “The hand of the man who tore the neck of God’s enemy must be kissed”.

In 2019, Twitter suspended Khamenei’s account over a tweet that said Khomeini’s fatwa against Rushdie was “solid and irrevocable”. The Asr Iran news site on Saturday carried an often cited quote by Khamenei that said the “arrow” shot by Khomeini “will one day hit the target”.

The 15th Khordad Foundation, a wealthy Iranian religious organisation, increased the bounty on Rushdie’s head to $2.5 million in 1997, eight years after it first offered a reward. The foundation increased the amount to $3.3 million in 2012. (…)

The headline of the hardline Vatan Emrooz newspaper read: “Knife in Salman Rushdie’s neck”. The Khorasan daily carried the headline: “Satan on the way to hell”.

▪️ The attacker: “I love Iran and Hezbollah!”

▪️ Police: “We are searching for the motive”

Matar “was also understood to be using a fake drivers license in the name of Hassan Mughniyah – names which are linked to infamous terrorist organization Hezbollah,” the UK’s Daily Mail revealed.

Rushdie’s attacker “was born in the US and officials are investigating possible sympathies for Shia extremism and Iran’s Islamic Revolutionary Guard Corps,” the Sky News UK reported.

Citing sources in law enforcement, the broadcaster noted that a “preliminary review of Matar’ social media shows he had sympathies for Shia extremism and Iran’s Islamic Revolutionary Guard Corps (IRGC).”

The Iran-inspired attack on Rushdie comes as the Biden administration is on the verge of finalizing a nuclear deal with the Mullah regime. Besides lifting the Trump-era sanctions, the proposed Biden-Mullah deal may ease sanctions on Iran’s Islamic Guard (IRGC), news reports suggest.

President Biden has already sweetened the deal for the Iranians by easing key sanctions. If the deal goes ahead, the Biden White House will be reversing the President Donald Trump’s policy of “Maximum Pressure” on Iran, which the previous administration designated as the  ‘world’s worst state sponsor of terrorism.’

Much like the Obama-Kerry nuclear deal, the new agreement will end up financing regime-backed terrorist groups from Gaza-based Hamas to Yemen’s Ansar Allah Houthis militia.

The silence of @POTUS in response to the attempted murder of Salman Rushdie looks increasingly the result of one thing:

A desperation to return to the Iran deal.

It has to be really difficult being an Islamic terrorist. You can cite chapter and verse of the Quran. You can cite the authoritative sources for examples of the ‘PROPHET:” and his ” COMPANIONS.?”

The Western gatekeepers of the Holy Quran are like nahh. No way, allahu akbar-shrieking Quran-quoting neck-stabbing knife-wielding assassins can you be guilty of the crimes’ you proclaim.

I have been assured by the media that “Allahu Akbar” actually means “you will never discover my motivation” in Arabic. Weird that they have such an oddly specific phrase, but whatever.

Savages are gonna be savages.
.

It’s about the 2.5 year anniversary of when President Trump assassinated Qassem Soleimani.

Terminating one is no where near enough.

It’s hard to see why the Biden administration is salacious to revive the Iran nuclear deal.