“The tunnel was dug dozens of meters underground from the Gaza City, and was being built in the direction of a post that is air-parallel to Kibbutz Alumim.” 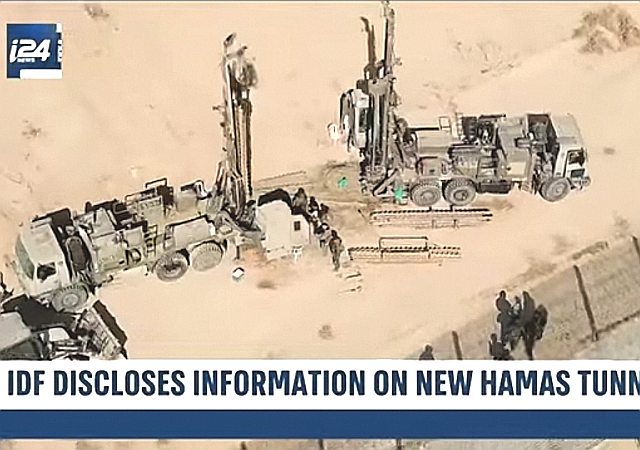 The Hamas attack tunnel had two branches running across the northern Gaza border. Still, they failed to penetrate Israeli territory thanks to an underground barrier built by Israel to thwart such attacks. “Israel’s subterranean barrier — an underground reinforced concrete wall that is studded with sensors to detect tunnels — runs parallel to the overground border — a 20-foot (six-meter) steel fence — inside Israeli territory, several dozen meters from the internationally marked border,” The Times of Israel explained.

In the past, the Gaza-based Hamas terrorist group has used such tunnels to launch sneak attacks on Israeli posts and to abduct Israeli soldiers and civilians.

The discovery of the Hamas terror tunnel comes just weeks after Gaza-based terrorist groups, mainly the Palestinian Islamic Jihad (PIJ ), fired more than 1000 rockets toward the Israeli towns and cities, with rocket barrages reaching the skies above Jerusalem and Tel Aviv.

The IDF said Monday it has neutralized in the past few days an attack tunnel belonging to the Hamas terrorist organization, dug from the northern Gaza Strip and leading to the Israeli territory.

The terror tunnel did not cross the newly-constructed underground sensory barrier, thus did not pose a threat to Israeli communities in the area near the Gaza Strip border.

The army said the tunnel was identified a few weeks ago as part of the consistent and ongoing efforts to detect and neutralize terrorist infrastructure in the Gaza perimeter.

The destruction of the tunnel was delayed by last week’s operation in Gaza, dubbed Breaking Dawn, in order not to expose the forces to the anti-tank threats on the border.

The tunnel was dug dozens of meters underground from the Gaza City, and was being built in the direction of a post that is air-parallel to Kibbutz Alumim. The tunnel’s route crossed the border on paper, but not breach the new barrier.

“The tunnel routes were first neutralized during Operation Guardian of the Walls in 2021,” said outgoing Commanding Officer of the Gaza Division, BG Nimrod Aloni. “We recently identified efforts to restore the old tunnel route.

The discovery of the terror tunnel coincides with the uncovering of Hamas’s efforts to beef up its underground terrorist infrastructure in Gaza. Last month, the IDF released video evidence showing terror tunnels, weapons factories, and munitions depots built near Gaza schools, hospitals, and mosques.

Hamas is rebuilding its terrorist capacities that were destroyed by the IDF during the Gaza conflict in May 2021. The IDF disclosure proves that “Hamas has rebuilt some of the capabilities that were damaged during last year’s Gaza war,” Ynet News reported on July 27.

Terrorism: The Threat Within

Not just from Hamas-controlled Gaza or the PLO (Fatah)-controlled West Bank, Israel faces a growing threat from terrorists within its border. On Sunday, a Palestinian gunman fired on a Jerusalem bus, injuring eight people, including a pregnant woman. “The assailant targeted a bus carrying Jewish worshippers who had just prayed at the Western Wall as well as people in a car park near the holy site,” the BBC reported.

ISIS is spreading its tentacles among Arab Israelis and Palestinians. “Multiple arrests of ISIS-affiliated suspects have been made by the Shin Bet in the past. Another suspect was arrested in July, and in his interrogation, he admitted to identifying with ISIS and preparing to fight with the organization against Israel,” The Jerusalem Post noted on Monday.

In April, during the Muslim month of Ramadan, Israel was hit by a terror wave, with many of those attacks being carried out by the followers of ISIS.

I’m starting to wonder how much ground along that border hasn’t been dug up and collapsed already.

Still, they failed to penetrate Israeli territory thanks to an underground barrier built by Israel to thwart such attacks.
But, but, walls aren’t effective! /prog

I liked their earlier approach. Say they will attack soon so the terrorists go into the tunnels to wait and Israel blows up the tunnels.. Those were good times.

I wonder if Lidar overview can detect the tunnels?

There’s an idea!! Pump septic waste into the tunnels…..that will attract the rats…..add a few hundred gallons of waste oil and a bit of gas…add a match….