Hamas Orders Gaza-Based Journalists To Cover Up Civilian Deaths By Misfired Rockets, And Blame Israel For The Conflict

Hamas Orders Gaza-Based Journalists To Cover Up Civilian Deaths By Misfired Rockets, And Blame Israel For The Conflict

The journalists “were ordered not to report on Gazans killed by misfired Palestinian rockets or the military capabilities of Palestinian terror groups, and were told to blame Israel for the recent escalation” 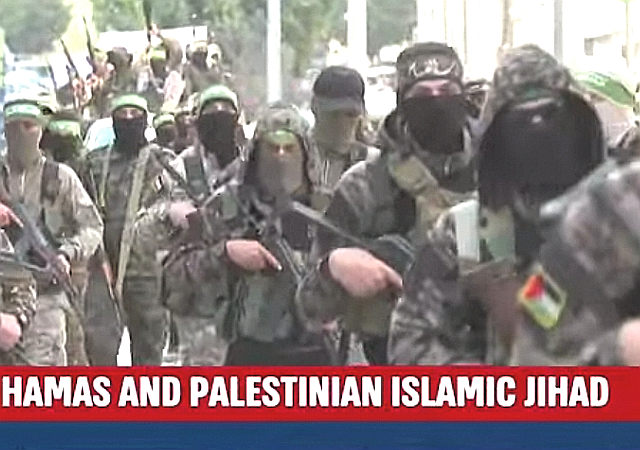 As the latest round of Palestinian rocket offensive against Israel comes to an end, reports emerge that Gaza’s ruling jihadist group Hamas had issued “guidelines” to foreign news outlets, essentially telling them to parrot the narrative set by the Palestinian terrorist groups.

The Hamas’s media guidelines, issued under thinly veiled threats, were “aimed at imposing the Islamic militant group’s narrative on media coverage of the conflict by implicitly threatening Palestinian reporters and translators who live under its heavy-handed rule,” The Associated Press reported Tuesday.

Hamas later “retracted” the guidelines after its details were leaked to the media. Still, the terrorist group has sent a clear message to foreign media outlets that wish to operate within the territory under its control. “Even if the rules are officially withdrawn, Hamas has still signaled its expectations, which could have a chilling effect on critical coverage,” the AP noted.

The Foreign Press Association, which represents international media, including The Associated Press, said the guidelines were rescinded after discussions with authorities in Gaza.

The FPA said in a statement that “such a move would have constituted a severe, unacceptable and unjustifiable restriction on the freedom of the press, as well as the safety of our colleagues in Gaza,”

The rules would have gone much further than existing Hamas restrictions. They appeared aimed at imposing the Islamic militant group’s narrative on media coverage of the conflict by implicitly threatening Palestinian reporters and translators who live under its heavy-handed rule.

Even if the rules are officially withdrawn, Hamas has still signaled its expectations, which could have a chilling effect on critical coverage.

The journalists “were ordered not to report on Gazans killed by misfired Palestinian rockets or the military capabilities of Palestinian terror groups, and were told to blame Israel for the recent escalation,” The Times of Israel reported.

The new set of Hamas guidelines orders Gaza-based reporters to refrain from “writing about forbidden topics like the rocket misfires— or about the media guidelines themselves,” the news website added.

Out of more than 1,100 rockets fired by PIJ and other terrorist groups last week, a large number of them landed inside Gaza itself — accounting for most of the civilian deaths during the conflict. “Approximately 20% of all Islamic Jihad rocket launches landed within the Gaza Strip, resulting in many injuries and fatalities of Gazan residents,” the IDF said in a statement obtained by the Legal Insurrection on Sunday.

The latest incident that highlights this case is the killing of Gaza civilians, including five children, by a stray rocket fired by the Palestinian Islamic Jihad (PIJ) over the weekend.

On Sunday, the IDF released a video showing a rocket fired from a PIJ position landing in the Gaza residential area of Jabalia. As seen in previous conflicts, the initial media response was to blame Israel for the civilian deaths.

Regardless of Hamas diktats, the mainstream media has a history of playing useful idiots for the Gaza-based terrorists — covering up their war crimes and smearing the Israeli military.

As I noted in my post following the last year’s Gaza escalation (during which Hamas fired more than 4000 rockets toward Israeli cities and towns), the big media was “parroting [Hamas] propaganda meant to paint Israel as the aggressor, without caring to examine the facts on the ground.” Observing CNN and other mainstream news outlets report on last week’s conflict, nothing much has changed.

Hey @CNN, we fixed this headline for you.

As of 8:13 PM, 450+ rockets have been fired from Gaza into Israel.#OperationBreakingDawn pic.twitter.com/XPiqJPzn3b

The only new thing here is that they actually formulated written guidelines and officially circulated them. The “Palestinians” — not just Hamas but also Fatah and all the rest of them — have been doing exactly this since at least the 1970s, if not earlier, but I don’t think they ever put it in writing as a formal code of conduct. It was understood, and if anyone didn’t understand it they were forcefully made to understand.

Even the execrable Tom Friedman admitted that this was how it worked back when he was a reporter in Beirut and Arafat controlled the south of Lebanon. He just didn’t see a problem with it.

So-called journalists have been making unethical and immoral deals with dictators for a very long time. It’s a strange form of power-sharing somewhat akin to official allocation of pro-regime gossip. The majority of these reporters are left wing. The character profile varies little; true believers, arrogant adventurers, ideological zealots and fools with writing skills.

Hamas must be feeling pressure from what it considers friendly quarters – got jumpy and issued a dictate – leaving AP no choice but to sooth and massage. AP is quoted whispering “we got your back,” bro.

⚠️ This is misleading.
Find out why government officials consider off-course rockets safe for most Palestinian people.

Planned Palihood where the bodies of evidence are aborted by friendly choices and sequestered in darkness.

In October 2020, who ordered USA media to ignore the Hunter Biden story.